It isn’t a normal thing for a politician to say. But then, we aren’t living in a normal world. We are living in a world where factories in China – the country devastated by the first wave of coronavirus cases – are now rushing to manufacture ventilators for everyone else.

We’ve seen the graphs. We know about the importance of “flattening the curve”, and trying not to overload the NHS’s capacity to deal with Covid-19. So what is that “capacity”? At the last count – in January 2020 – there were 4,123 critical care beds for adults in England, plus a further 312 paediatric beds for children and 1,439 for babies. But they were not standing empty: 83 per cent of those adult beds were occupied at midnight on a specified Thursday when hospitals do their monthly count. That figure was the highest it had been since the previous January, but was still in the typical range: since August 2010, monthly occupancy rates have never been below 75 per cent.

On that Thursday in January, then – before a single case of Covid-19 had been recorded in the UK – there were a total of 1,180 empty critical care beds in England, of which just 217 were in London. 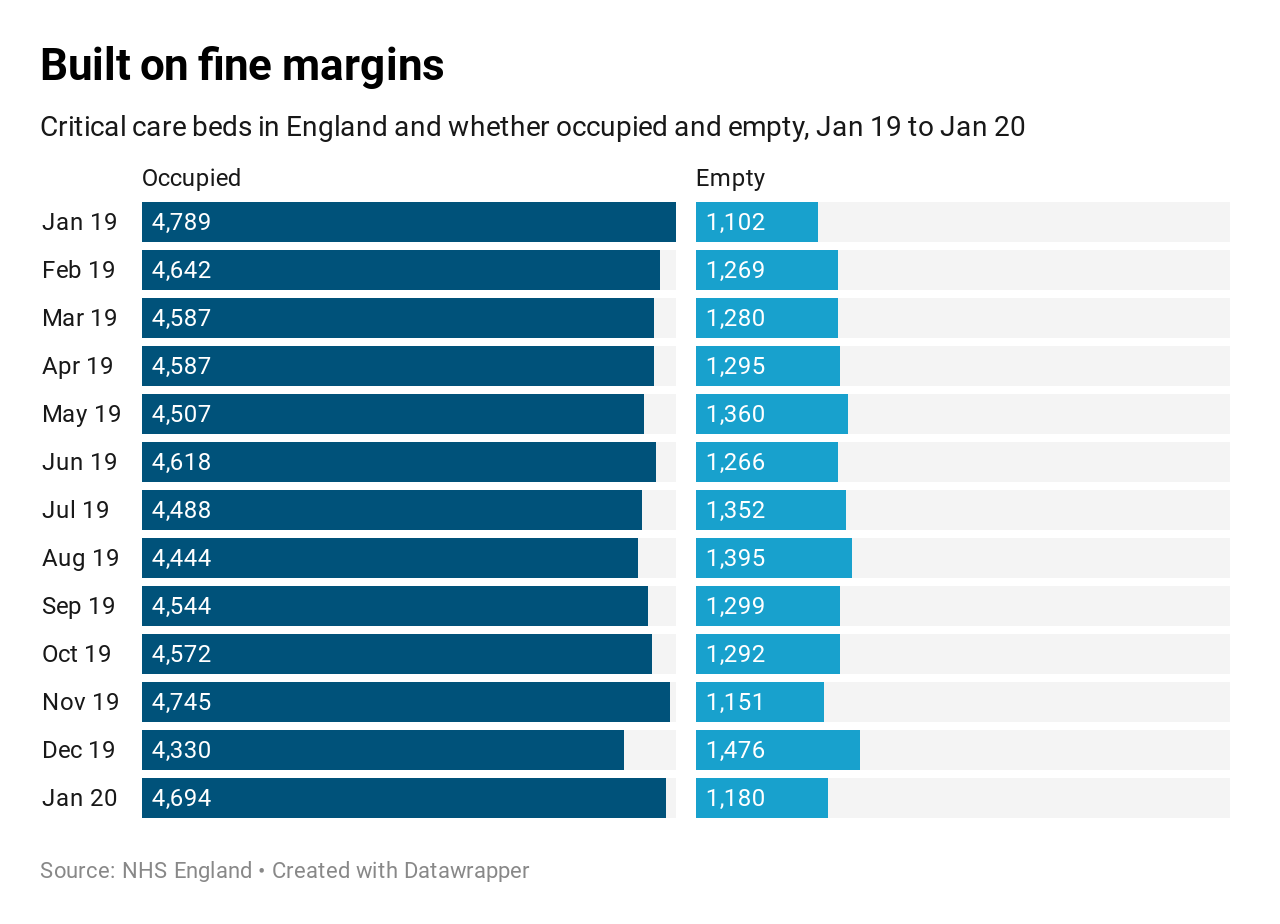 This is the result of having a critical care system designed for maximum efficiency in “normal” circumstances: enough capacity with a bit to spare. It wasn’t designed for a sudden, huge surge in demand. The question is how quickly it can adapt to an utterly changed world.

The NHS announced last weekend that it had struck a deal with the private hospital sector, adding a further 8,000 beds to its overall capacity across England. But as the fine print showed, the private sector isn’t really designed for critical care: London, the area with the most cases of Covid-19, received an extra 2,000 beds overall, but only 250 “operating theatres and critical beds”. Health Secretary Matt Hancock subsequently announced that London’s ExCeL centre would be transformed into a 4,000-bed “field hospital” to cope with the virus’ peak; other cities, such as Manchester, are drawing up similar plans.

A bed only becomes a critical care bed if you have enough of the right staff, and enough of the right equipment. Under normal circumstances that would mean one specialist nurse per patient, and one consultant for every 30 – although trusts in London have already been told to relax those guidelines in the current circumstances. In terms of equipment, it means ventilators – and the race to produce those may well be where the race is won or lost.

The head of the NHS, Simon Stevens, said last week that Britain had 8,175 ventilators available, including those from the private sector and the military. Research by GlobalData suggests that since 2015, the NHS has been buying in around 1,000 critical care ventilators a year to replace those that have reached the end of their useful life, and to increase their overall stock.

The government has challenged industry to deliver a further 5,000 ventilators within a month, and says it expects to need 30,000 in total. Let’s assume that is possible. Is it enough? Is it fast enough?

A good starting point is the Imperial College London report that warned 260,000 people could die unless the government switched from a strategy of “mitigation” to “suppression” – with social distancing and other measures kept in place indefinitely, to slow the spread of the disease. The report based its findings on research about cases in China. It concluded that 4.4 per cent of those infected would need hospital treatment, and 30 per cent of those hospitalised would need critical care. Those figures vary widely for patients of different ages. More than a quarter of Covid-19 patients in their eighties are likely to need hospital treatment, but fewer than 1 per cent of children and teenagers. But overall, around 1.3 per cent of all patients are expected to end up in hospital needing critical care. That means ventilators. 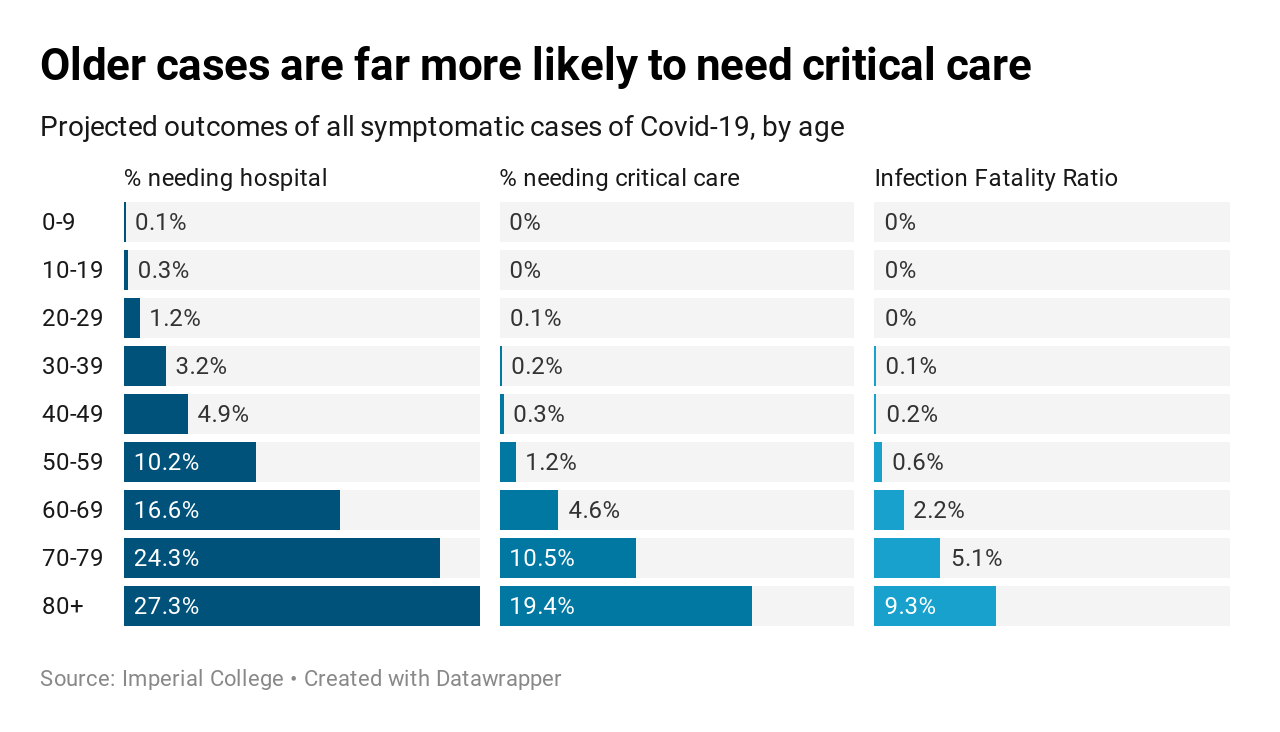 The Imperial team calculated the average hospital stay for all Covid-19 patients who required one as 10.7 days – roughly in line with cases of pneumonia. Those needing critical care would spend an average of 16 days in hospital, receiving critical care for 10 of those.

Ideally we’d know exactly how many cases there are in the UK right now, and how many people are lying in critical care beds. Unfortunately we don’t know either with any degree of precision. Leaked figures have suggested a huge rise in patients in intensive care in London hospitals, and Northwick Park hospital in the capital’s north west announced it had run out of beds last week. But even though Public Health England is collecting daily data from all acute trusts in the country, it isn’t publishing them. The only official data available is the monthly snapshot that appears six weeks after the fact. Unless that changes, it will be the middle of April before we know for sure how many critical care beds were occupied in February.

Neither do we know how many people have Covid-19 – not really, anyway. We only know how many people have tested positive (9,529 as of 25 March). As the virus spread, the government restricted testing to those admitted to hospital with suspicious symptoms, and testing in the community was discontinued. The majority of people – who contract a mild version of the virus  – won’t go to hospital and simply don’t count.

What we do know is how many people have died. We also know that the model used by the Imperial College team implied Covid-19 had an Infection Fatality Ratio (IFR) of 0.9 per cent. So just under one in 100 people infected with the virus will die. If that sounds lower than some of the “death rates” you’ve heard mentioned, that’s because it is. People generally quote the Case Fatality Ratio (CFR), which is the proportion of deaths among known cases. The UK has registered 465 deaths and 9,529 known cases; that is a CFR of 5.2 per cent. But if we don’t know how many people have had mild versions of the disease that didn’t require hospital treatment – and we don’t – this figure is of limited use. 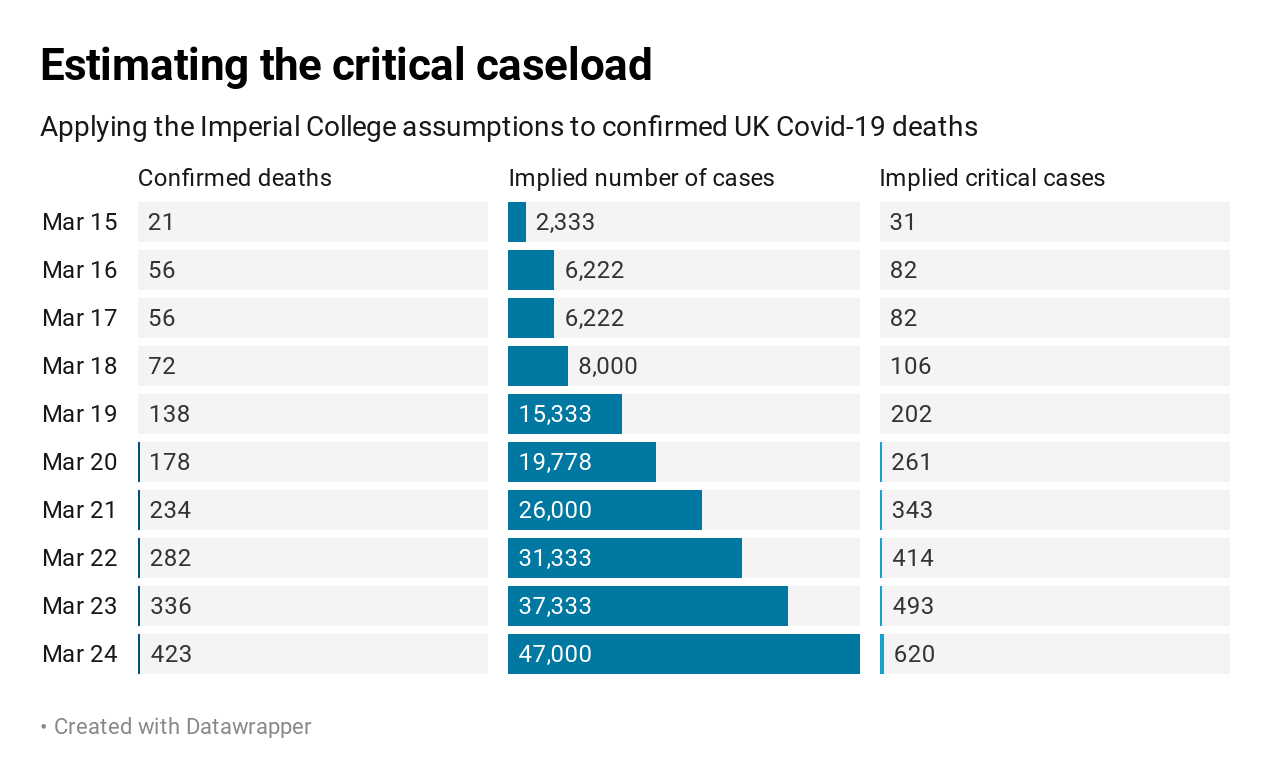 How does that tally with what we know for certain? Well, given that more than a third of known cases in the UK have affected London – which had only 217 spare critical care beds in January, before Covid-19 hit – it would explain why parts of the capital might be pushing up towards capacity.

It’s impossible to know what is to come, and how quickly. The best we can do is look at other countries who followed a similar trajectory in terms of deaths from Covid-19, but are ahead of us on the curve. Let’s take two: Italy and Spain.

Italy’s death toll rose above 400 on 9 March, when it reached 463. Within two days that figure was up to 827; within a week it was 2,158. Within two weeks there had been a total of 6,820 deaths. According to the Imperial model that would equate to 623,000 extra infections since Italy was at the point the UK is at now. Some 27,000 of those would have required hospital treatment and 8,000 would have required critical care, for an average of 10 days each.

Spain leapt from 342 deaths by 16 March to 533 a day later. A week later, and there have been 2,275 more deaths, with the daily death toll still rising each day. That equates to 8,700 more people in hospital in less than a week, and 2,600 more needing critical care. 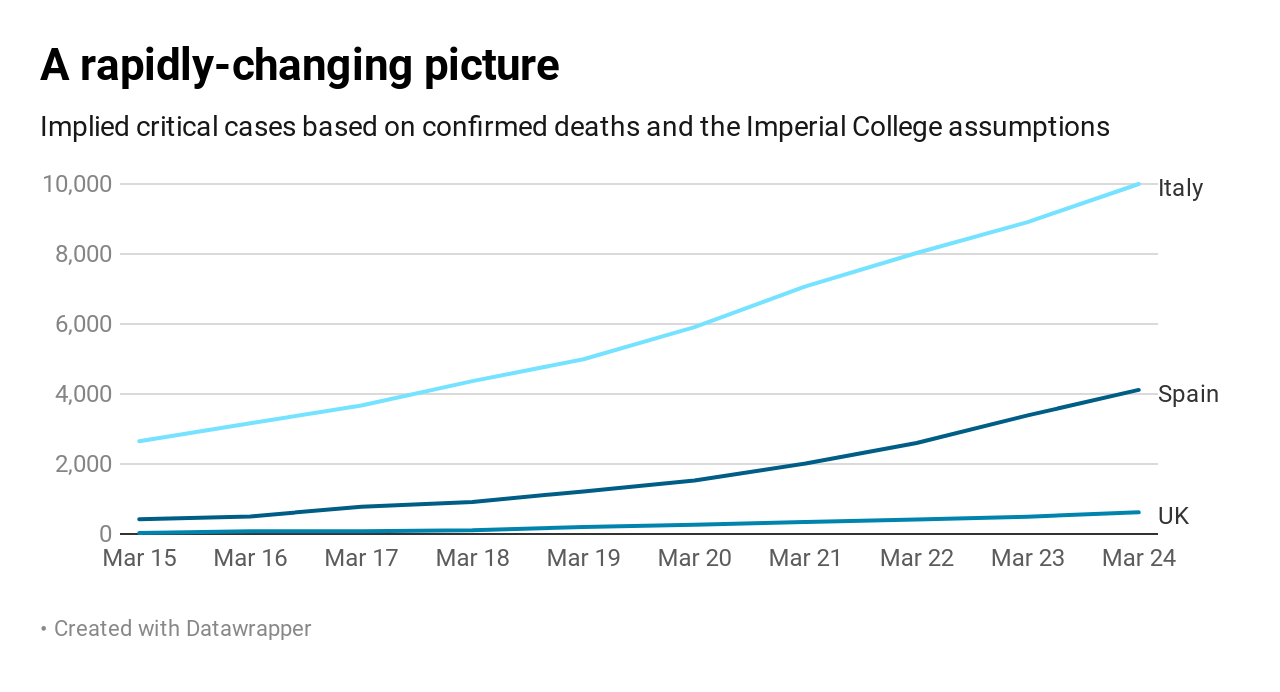 Will the UK’s lockdown affect what happens now? Undoubtedly, but that doesn’t mean the death toll won’t rise for some time to come. Italy – which has been in nationwide quarantine since 9 March, and had local lockdowns even before that – seemed to be making progress when the daily death tally fell from 793 on 21 March to 651 on 22 March and 601 on 23 March. By 24 March, deaths were back up to 743. That still represents progress – unchecked, we could expect to see deaths rising rapidly every day – but there’s a difference between “flattening the curve” and bringing the number of cases down. Until you manage the latter, demand on the health service continues to rise.

An NHS spokesperson said: “The NHS is working around the clock to deal with this unprecedented global health threat, including rapidly ramping up treatment capacity within hospitals, and striking a landmark deal with private care providers which has put 20,000 staff, 8,000 beds and 1,200 ventilators at our disposal.

“It remains absolutely vital that this huge mobilisation by the NHS is matched by action from the public which means following medical advice to the letter – please stay at home to save lives.”