During the last few days, as lockdowns started to look inevitable, the general public began to prepare for a potentially grim few months. They worried about loneliness among those isolated from others, the ability to get food safely, and what it might mean to spend the entire spring indoors, unable to get any real reprieve from cabin fever.

But on Reddit, 4chan, and misogynistic online forums, incels have been celebrating the fact that attractive people are about to be stuck inside – living their lives just like incels, and crucially, unable to have casual sex.

On forums such as Reddit’s r/shortcels (short incels) and incel website Incels.Co, news of a UK lockdown last night kicked these posts into overdrive. Incels had been gloating about this prospect since coronavirus first appeared in the west, and now they had a case where Chads and Stacys – men and women demonised by incels for being sexually active and stereotypically attractive – would be forced indoors for the foreseeable.

Posts gleefully remarked about how British “foids” (a derogatory slang term for sexually active women) would be “crying and suffering” and how “roasties” (a similar slang term) would be “seething”. “I would like to thank the [person] that ate a bat,” one Reddit user wrote, “and consequentially [sic] made roasties have mental breakdowns because they can’t get ravage by a Chad for weeks.” 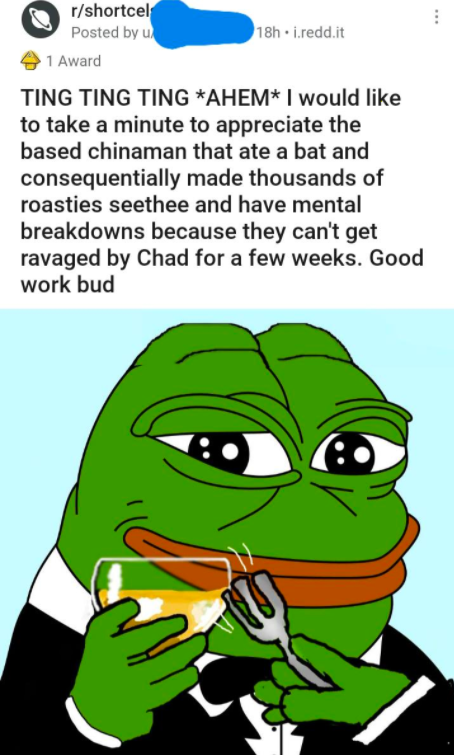 Many of the posts across these forums see coronavirus as karma for having casual sex; incels feeling like they’ve “won” the argument they’re having with themselves about the value of chastity and a life online. Some verge on incredibly violent, calling coronavirus a “gift from god” or “St. Coronavirus” because it increases the likelihood that “normies” will die. Some have even twisted people putting themselves forward for vaccine testing as women being desperate for sex. Ultimately though, they’re just grateful to see other people leading sexless lives. “The fact that Chad and Stacy aren’t getting to have promiscuous sex right now honestly makes me so happy,” one Reddit user posted.

Beyond the fact that Chads and Stacys can’t have sex, incels are also gleeful that they can’t have social lives, travel or go to the gym. After coronavirus, one 4chan user posted, Chads will realise they are “just a dumb and useless piece of flesh” and that they would be forced to go online to get “a tiny shred of attention”. 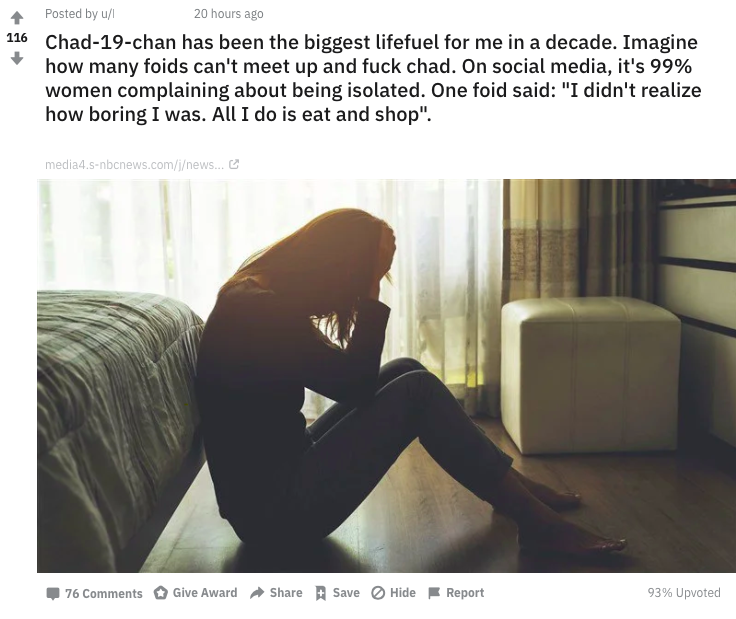 However, despite the celebration, most coronavirus incel posts acknowledge that this all will come to an end and the “Chads and Stacys of the world” will eventually go back to having as much sex as they like. “Foids are making society way worse than corona virus [sic] ever could,” one user on Incel.Co wrote, advocating that incels focus on their primary concern of female sexual liberation rather than be distracted by this small win. “Their lives are still ten times more fulfilling than ours.”