“The chemicals in vaccines are the same that you have in shampoo,” one user wrote. “But we don’t inject shampoo, soap, tuna or moisturiser directly into our thighs,” another replied. “There are other ways of thinking you know,” another person added. “I’m glad that there are other people out there who think differently [like me].”

This snippet of conversation, from a 2015 post on Mumsnet, shows a debate that is far from new. The anti-vaccination movement, commonly known as anti-vaxxing, has roots that date back hundreds of years to religious upheavals and anti-science movements. The latter half of the twentieth century witnessed two unprecedented waves of anti-vax propaganda in the West – both spawned by single studies that were eventually debunked.

First, in 1974, a study from the Hospital for Sick Children at Great Ormond Street in the UK linked negative neurological effects to the pertussis vaccine, which protects against whooping cough. Although it was swiftly discredited, having only 36 participants and highly questionable methods, pertussis vaccinations declined across the UK from 81 per cent of the population in 1974 to 31 per cent by 1980. A subsequent pertussis outbreak put catastrophic strains on the NHS in the early 1980s.

The second study was the product of since-disgraced UK doctor Andrew Wakefield. In a paper published by the Lancet in 1998, Wakefield claimed that the measles, mumps, and rubella vaccine (known more commonly as the MMR vaccine) could cause autism and health problems including gastrointestinal disease. Within two months the Medical Research Council announced that there was no evidence to support Wakefield’s claims. But the influence of his paper endured. For nearly a decade, MMR vaccinations fell, measles and mumps broke out, and Wakefield, despite leaving his medical post, became an international superstar for a study that was labelled by medical groups as “an elaborate fraud.”

Today we’re on the brink of a brand new wave of anti-vaxxing in the West; one that’s been bubbling under the surface for years in online forums like Mumsnet. This latest wave has a far more fractured origin point, without any single obvious study, incident, or viral outbreak to inspire the onslaught of anti-vaxxing propaganda that has spread across the internet over the last few months.

But one common denominator links all of these origin points together. Today, anti-vax propaganda is re-emerging thanks to social media.

It initially began through what you could call the “grassroots” – people posting in Facebook groups, on Mumsnet, and other chat forums over the last couple of years. While places associated with the spread of misinformation, such as 4chan and Reddit, are often presumed to be a part of this trend, there is little evidence that anti-vax propaganda was popularised through these sites.

In the UK, Mumsnet became a hotbed for anti-vaxxers from around 2015 onwards. Posts soliciting advice on medical issues would be inundated almost instantly with anti-vaxxers arguing that the panacea for children’s health issues was vaccine-free lifestyles. Women on the site criticised GPs who were “not very open-minded”. Some, in response to arguments from pro-vaxxers that they should vaccinate their children, replied: “but my child [could] have a reaction to a vaccination that could possibly be fatal”.

Even on threads critical of anti-vaxxing, many women who had their children vaccinated admitted they were partially convinced by the links to autism and the case against vaccinations. One common argument reads like this one from two years ago:

“I don’t agree with pumping man made stuff into the body when some of these vaccinations haven’t even been around long enough to see what the long term effects are? I know religion probably won’t mean much to many of you, but my faith […] that we will be all kept safe is actually stronger than my faith in some bozo with a syringe in a lab injecting mice?”

One of the strongest influences on the anti-vaxxing resurgence is the Facebook page and group Stop Mandatory Vaccination. Created in 2015, the page has over 125,000 likes. Its incredibly active, private Facebook group counts nearly 160,000 members. The mission statement on their Facebook page reads:

“Vaccines are dangerous and unnecessary for vibrant health. Unfortunately, we’ve been lied to. On this website you can find numerous videos of parents talking about vaccine injury or why they are vaccine free, read comments from over 180 parents who share why they stopped vaccinating, discover how to raise a healthy child without any vaccines, learn the many horrors of vaccines and how dangerous they actually are, and find out how we have been lied to about the need for vaccines for public health.” 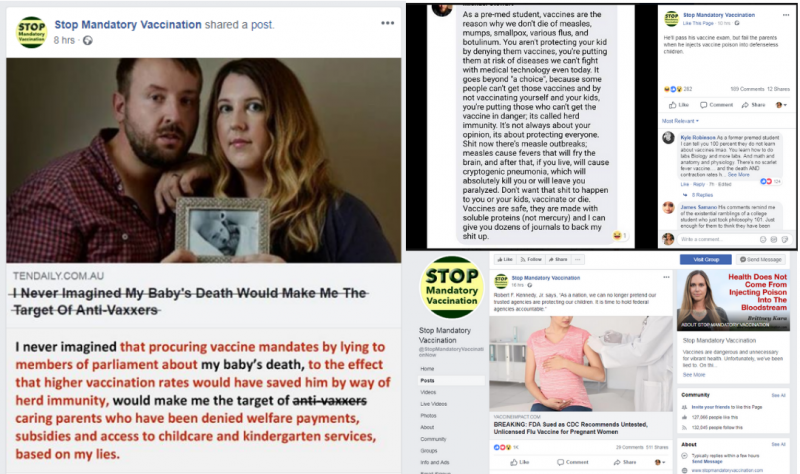 Although the group is closed, pro-vaccination people inside the group posing as anti-vaxxers often share screenshots on Reddit and Twitter. They show members sharing advice on how to convince pro-vaxxers not to vaccinate, screenshots of members “owning” pro-vaxxers in debates about vaccines, and information on where to find doctors who will allow them not to vaccinate their children.

Stop Mandatory Vaccination is just one example of the hundreds of thousands of anti-vax propaganda outlets on social media. But the problem isn’t just the conspiratorial posts of their members. The search terms of social media giants like Facebook and Youtube hothouse the issue by leading users to see anti-vax propaganda more easily.

The Guardian reported at the start of February that search suggestions on both platforms guide users toward anti-vaxxing propaganda. When typing “vacci” into either platform (making the platform think you are likely looking for something on vaccines), the suggestions that appear are “vaccines are toxic” “vaccinations the silent epidemic”, “vaccine re-education”, and “vaccine resistance movement”.

Facebook and YouTube claim they want to do something about this problem. But that would mean confronting a trickier element of this resurgence: anti-vaxxer posts get hits. Pages, groups and articles on platforms like Facebook garner hundreds of thousands of likes and shares. Even if they are shared for the purpose of derision, their popularity appears in pageview statistics.

iNews senior editor Luke Bailey pointed this out on Twitter last week. He showed that the social media-driven publication LadBible got over 24,000 shares for publishing an almost entirely unchecked opinion from a wellness blogger about why she refuses to vaccinate her kid. (After the popularity of that post, Bailey showed that the Daily Mirror, the Daily Mail, and the Sun all subsequently ran stories on her with even fewer caveats to her anti-vaxxing arguments). In a now deleted tweet, BuzzFeed’s media reporter Mark Di Stefano highlighted that the LadBible post received hundreds of thousands of engagements on Facebook. Beyond Facebook pages and groups wholly dedicated to anti-vaxxing, it’s lucrative for publications to run anti-vaxxing pieces – because they inevitably do numbers.

This @ladbible post, with 24,000 engagements, is wildly irresponsible. If you’re writing about anti-vaxxers, (or other disinformation) the crucial thing you have to do is state the truth first, not the falsehood – even if you’re going to knock it down. Also, fucking knock it down pic.twitter.com/tJYL15V5Yd

The popularity of these posts has exceeded the occasional traffic-driving fluff piece. A report published last month by the Royal Society for Public Health said half of parents with small children will see anti-vaccination propaganda on social media, despite Facebook and YouTube’s promises that they are attempting to confront the problem. And while these platforms could make drastic, sweeping changes that mean parents see far less of this stuff, the seeds of doubt sewn by widespread anti-vax propaganda means that unholy amounts of damage will have already be done.

We can’t foresee future implications of this anti-vaxxing propaganda. Of those 24,000 LadBible shares, how many people were convinced? How many were simply mocking the piece? How many thought it made sense, but would never go against the advice of their GP?

Much like the delayed effects of the 1974 pertussis study, it may take years to fully understand how much of a difference this will make. As with misinformation in general, it’s difficult to assess what can and should be done in the meantime to prevent such unknown outcomes. Will it, like global warming, reach the point of no return before those with the power to change things say, “God, it’s a bit hot out here, isn’t it?” Without action in the immediate term, it seems likely.

But this recent wave of anti-vaxxing hasn’t gone unnoticed. The World Health Organisation listed “vaccination hesitancy” as one of its top ten global threats in 2019. “the reluctance or refusal to vaccinate despite the availability of vaccines […] threatens to reverse progress made in tackling vaccine-preventable diseases,” it says.

“Measles, for example, has seen a 30% increase in cases globally. The reasons for this rise are complex, and not all of these cases are due to vaccine hesitancy. However, some countries that were close to eliminating the disease have seen a resurgence.”

And while social media has catalysed the recent wave of anti-vax propaganda, there are signs that particular sites could also provide some solutions. Pinterest announced this week that it would combat anti-vax propaganda on its site by blocking all searches and content relating to vaccination. Reddit has become a place where many young people have been able to find information they need to circumvent their parents’ anti-vax views and get vaccinated before they turned 18.

when i turned 18 the first thing i did was get all of the vaccinations my anti-vaxx parents had stopped me from getting bc i was a minor and they refused to acknowledge modern medicine!! reddit played a big role in my decision to go get a million shots! https://t.co/XGPSZdwHVn

But even with the limited remedies it may provide, social media has undeniably sparked a new era of wildly unchecked anti-vaxxing propaganda – an era that will inevitably continue. And while the effects may take years to properly understand, an enormous amount of damage has already been done. The question now is: how much more damage will we allow? Or perhaps more importantly: how much damage can we feasibly prevent?