When Bradley Proudfoot woke up on 3 August 2018, he feared he would shortly be kidnapped by the government. Just before going to sleep the night before, the Scottish 21-year-old had sent out a tweet to his 3,000 followers.

“Has anyone ever thought that maybe Madeleine McCann never even existed?” he wrote, referring to the disappearance of the three-year-old daughter of doctors Kate and Gerry McCann from her bed in a Portuguese holiday apartment in May 2007. The tragedy dominated the tabloids at the time and continues to generate media interest today (in September, Gerry McCann spoke to BBC Radio 4 about her disappearance). 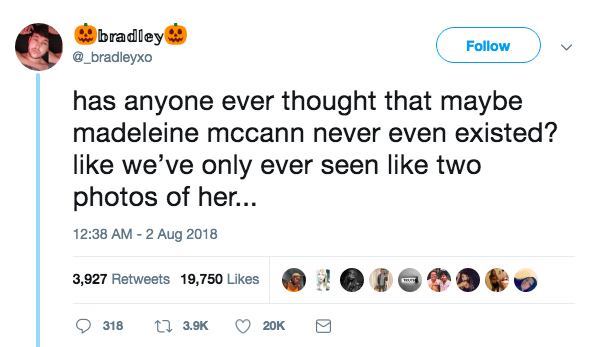 “It’s like almost just two photos we’ve ever seen of her,” Proudfoot says of his theory. “I was about to sleep and was watching YouTube conspiracies and I was like, ‘Nobody has ever thought that maybe she never even existed.’” His tweet went viral overnight, gaining nearly 4,000 retweets and 20,000 likes.

“People started saying I was going to disappear,” he tells me over Twitter’s messaging service. I ask who would fabricate the existence of Madeleine McCann – and why.  He says: “I don’t know. It could’ve been like a government thing to get money or to ruin Portugal as a resort or something.” 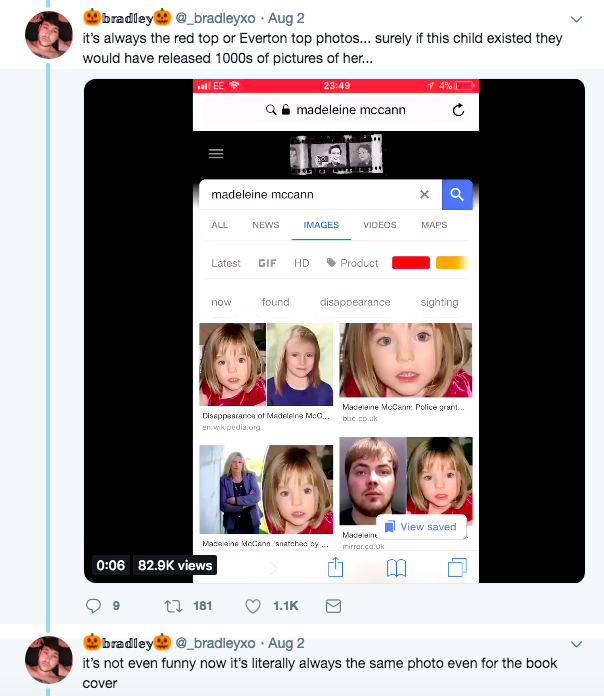 In recent years, social media has given rise to a huge number of conspiracy theories. YouTube has spread them via its “recommended videos” feature – the algorithm picks up on the popularity of conspiracies and thus feeds them to larger audiences. After homemade bombs were sent to Barack Obama and Hillary Clinton last week, right-wing Twitter users claimed this was a “false flag operation” – suggesting Democrats themselves mailed the bombs to win the midterm elections. “False flag” – a previously obscure piece of conspiracy terminology – was elevated to the masses on Twitter’s homepage by its inclusion in the trending topics list.

Proudfoot “loves” YouTube conspiracy videos, and true-crime tweets are exceptionally popular with Generation Z, who were born from the mid-1990s onwards. I spoke to a 17-year-old American who calls herself “V St Clair” and makes conspiracy threads on Twitter (a thread is when a series of tweets are linked together). Before that, she had 120 followers – she now has 67,000.

“Everyone finds interest in things like crime or stuff that’s considered taboo but no one wants to admit how much they love it,” she says of her tweets. “It’s something they can enjoy when they’re having time to themselves. They can get spooked while learning something at the same time.” 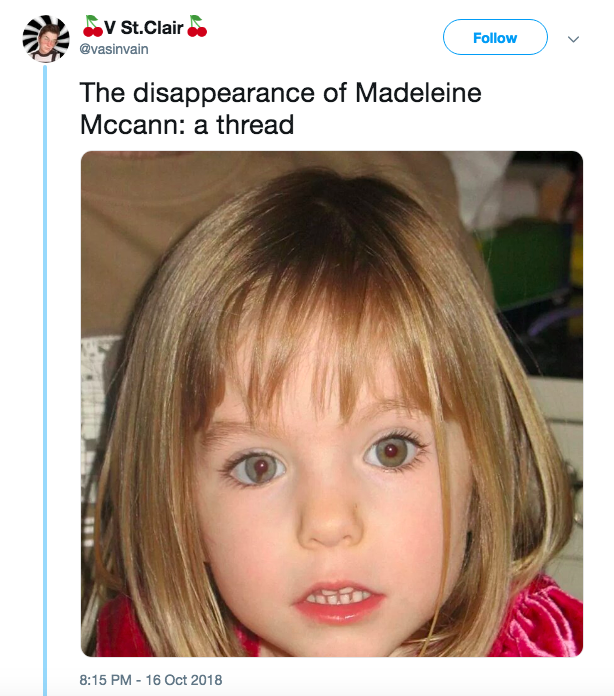 I’ve been on the internet long enough that conspiracies no longer shock me – I was once temporarily convinced, one fevered evening, that the pop star Avril Lavigne died in 2003 and was replaced by a lookalike called Melissa – yet I can’t deny I was surprised by the McCann threads. Sophia from London and Beth from Gosport, both 20, tell me that Proudfoot’s tweets went some way to convincing them that Madeleine had never existed.

“Documentaries seem to show the same two photos and one video of her,” Sophia says. “Surely the parents would want as many pics of her out there to help find their daughter?” Beth first read the thread at work, excitedly telling her colleagues about the theory. Upon reflection, she realised the conspiracy was unlikely. Why? 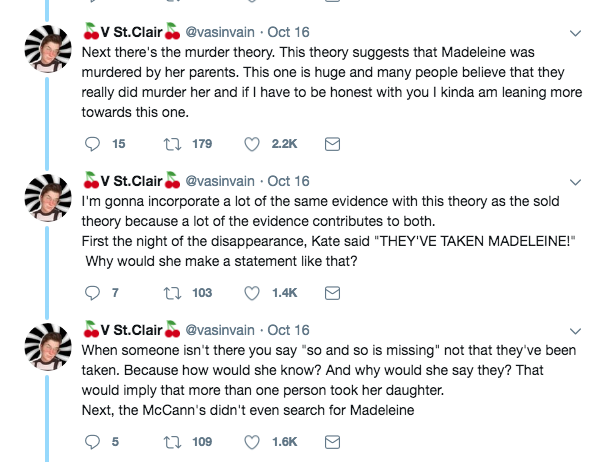 Such speculation is also present in the explosion of true crime podcasts and documentaries – from Serial in 2014 to the second series of Making a Murderer on Netflix now, where viewers are invited to treat real cases as guessing games. Online there is even less of a discussion about ethics. YouTuber Shane Dawson – who has nearly 19 million subscribers and frequently trends on the site – has popularised conspiracies and sells Illuminati-themed merchandise.

Yet is it really fair to blame Generation Z for treating the McCann tragedy unethically, when grown adults in the British press have done so with abandon for years? Kate McCann told the Leveson inquiry that she felt “violated” when the News of the World leaked her personal diary, while in 2008 the Daily Express and the Daily Star printed full-page apologies to the McCanns after publishing defamatory stories.

“I do my best to respect the victims in these situations,” V St Clair says of her threads. “I try to refrain from certain things out of respect.” She says she will not do a thread about the 2012 shooting at Sandy Hook elementary school because “that happened only a few years ago and literal toddlers were murdered”.

In fairness to Generation Z, their conspiracy theories are mostly harmless. Among older generations, political conspiracies have increasingly dangerous consequences. The 56-year-old man suspected of sending the bombs to Obama and Clinton shared conspiracies on his Twitter feed – in one tweet he touted a popular far-right theory that Clinton had covered up the murder of two children. Just days after his arrest, 11 people were murdered at a Pittsburgh synagogue. The suspect is a 46-year-old man who had posted anti-Semitic conspiracy theories online.

A recent study by the Pew Research Centre found that only 26 per cent of Americans over 50 could distinguish between facts and opinions, while younger adults succeeded 44 per cent of the time. Conspiracy theories are everywhere, and perhaps Generation Z aren’t the ones who should worry us.

Zayani Bhatt is a writer and founder of British Asian Women's Magazine.