The murder of journalist Jamal Khashoggi at the Saudi consulate building in Istanbul on 2 October has rightfully been plastered across international news for the last two weeks. It has also sparked a global debate about Saudi relations, how we treat our journalists, and what international co-operation looks like in the face of tragedy. However, it has also summoned that dreadful and inevitable thing: unsolicited opinions about a man’s wrongful, and likely horrific, death.

The most unsolicited of these opinions have come, unsurprisingly, from Reddit and 4chan, arguably the most notorious of the internet’s chat forums. And what are these opinions? That, in fact, Jamal Khashoggi’s death was actually just one part of a wider conspiracy – a conspiracy that can be traced all the way back to the death of Princess Diana.

Jamal Khashoggi happens to be a first cousin of Dodi Fayed, the late boyfriend of Princess Diana, who died with her in the infamous car crash in Paris the night of 31 August 1997. This has, of course, sent 4chan and Reddit wild, with both sites’ politics and conspiracy theory forums rife with comments on how the link must, MUST, prove a wider Jewish/Saudi/American/Muslim/Turkish/British conspiracy.

“Holy fuck. This murder has everything to do with princess diana [sic] I’m sure of it. Connect the dots. The saudis [sic] hated princess Diana and they hated Fayed” one Redditor wrote. “Nobody ever talks about this” wrote one 4channer. “This whole family glows in the dark.” 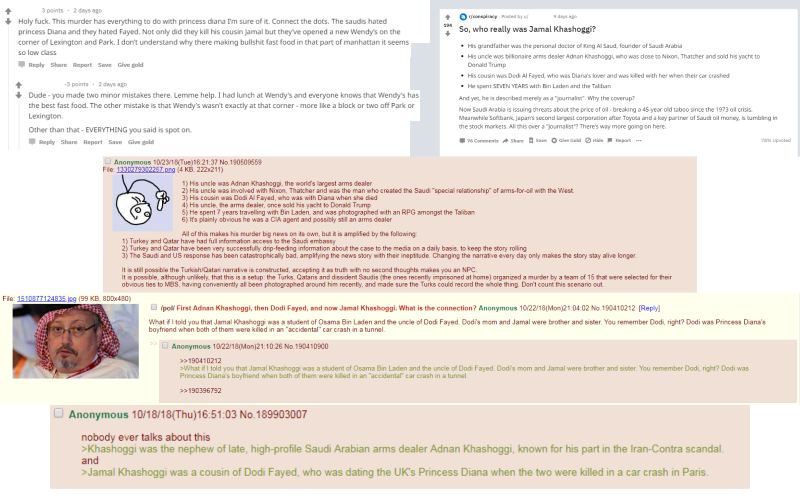 When one person on 4chan dared to suggest it was unlikely that Khashoggi would have been prepared to start a coup – a reference to one of the conspiracies around his death – since he was just “a blogger”, another 4chan user replied: “With this family history and connection to shit I wouldn’t be so sure about that.”

Princess Diana has long been the target of wild conspiracies. Inspired in part by comments in the aftermath of her death by Dodi Fayed’s father, Egyptian businessman Mohamed al-Fayed, publications like the Daily Express fuelled theories like Diana thought she was going to be killed, that there was something wrong with her car, that she was killed by the press, and, most famously that she was killed by order of the Queen. (In fact, a French judicial investigation concluded that her chaffeur was driving at high speed, under the influence, and this, combined with bad luck, was the primary reason for the crash and her subsequent death).

In the case of the Diana-Khashoggi sub-theory, many of those speculating are unwilling to reveal the nefarious details for now, merely hinting that some Illuminati-style body is systemically silencing a set of connected voices to benefit their greater (again, not specified by these conspiracy theorists) unknown aims. Others are helpfully asking questions such as “Why the cover up?” to get the ball rolling.

This obsession actually pre-dates Jamal Khashoggi’s death, instead going back to when his uncle, Saudi arms dealer Adnan Khashoggi (who is regularly noted in these conspiracy posts), died last year. The connection between Fayed and Adnan Khashoggi was made at the time, although far less widely circulated (likely due to the low-profile nature of the death in comparison to Jamal). The connection between both Khashoggis and Diana has also made it into tabloid press, including the Daily Mail. “Missing Saudi journalist Jamal Khashoggi is a nephew of a billionaire arms dealer and second cousin of Princess Diana’s lover Dodi Fayed,” it breathlessly reported, above a stream of photos of various Khashoggis mixing with celebrities.

Although the details around Khashoggi’s death were intially hazy, Saudia Arabia’s public prosecutor has been forced to admit that his murder was premeditated. That being said, many of the specific claims about the brutal way in which he was murdered are still being contested. But it’s safe to say that it will have nothing to do with the People’s Princess, but the conspiracy theorists on Reddit and 4chan will march on regardless. No amount of information, or a lack thereof, will keep them from their convictions and based on the tradition of Princess Diana conspiracy theories, we can even expect, as this story drags on, these convictions will only become stronger.