When logging onto Live.ly, there’s nothing that sets it apart from most video-sharing apps. You see livestreams from people you follow, stills from people you don’t, and the option to search for other videos or to make your own. It looks like just another place for kids to share and watch videos from friends and celebrities. But behind this mundane front Live.ly has turned into a place for adults to extract money from young users.

When the social media platform Musical.ly launched in late 2014, it was swiftly branded as yet another half-baked social media idea that was unlikely to grab the attention of a global market. The app, somewhere between Vine and Periscope without the charms of  either, was essentially designed as a place to make and share short videos, and to meet fellow content creators. In its early days it attracted some A-list celebrity users and major advertising campaigns, but failed to break into the wider public consciousness. Nevertheless, it maintained a loyal enough user-base of teens and tweens to keep it quietly ticking over.

In 2016, Musical.ly launched a new platform called Live.ly, which served as a live-streaming sister app to Musical.ly where popular stars could speak directly, live, to fans. Despite zero marketing spent on promoting it externally, it was immediately popular amongst the highly engaged Musical.ly user-base. Because Musical.ly already catered to a very specific audience of under 18 year olds, Live.ly became the perfect private space for social media stars to interact with a engaged audience not necessarily easily found elsewhere.

The purpose of Live.ly is so simple that it almost seems pointless. The average video, especially from bigger names on the app, usually goes something like this: first, they’ll spend a few seconds starting up the stream and making sure it’s working, nothing atypical for a live online broadcasts. The streamer will then say hello, acknowledge the livestream, and maybe even describe what they’re doing or what they’ve been up to. It’s then that they will normally begin asking viewers to interact with the video via a range of features such as comments or  “emoji-love” (Live.ly’s version of likes), and will make the odd shout-out to some of those watching. For the most part that’s it.

It all seems overly simple, and while other streaming apps market themselves with a range of different features or purposes (for example, reporting, capturing events, etc.), Live.ly presents itself essentially as a one-sided FaceTime without much else going on.

But where Live.ly gets interesting is when it comes to some of the additional types of engagement available on the app. As well as comments and “emoji-love”, viewers can send “gifts” to streamers while they’re live. These are essentially cartoon images of animals, hand gestures, and other random items; allowing the viewer to give the streamer a greater acknowledgement than a simple like.

To send a gift users must give up a certain number of “coins”, which are the in-app currency that costs real-life money to acquire. Coins can be bought in bundles starting from £1, but up to £100 can be spent in a single purchase. Gifts range in price, from five coins to five thousand, which is the real money equivalent of £48.99 for just one cartoon image. 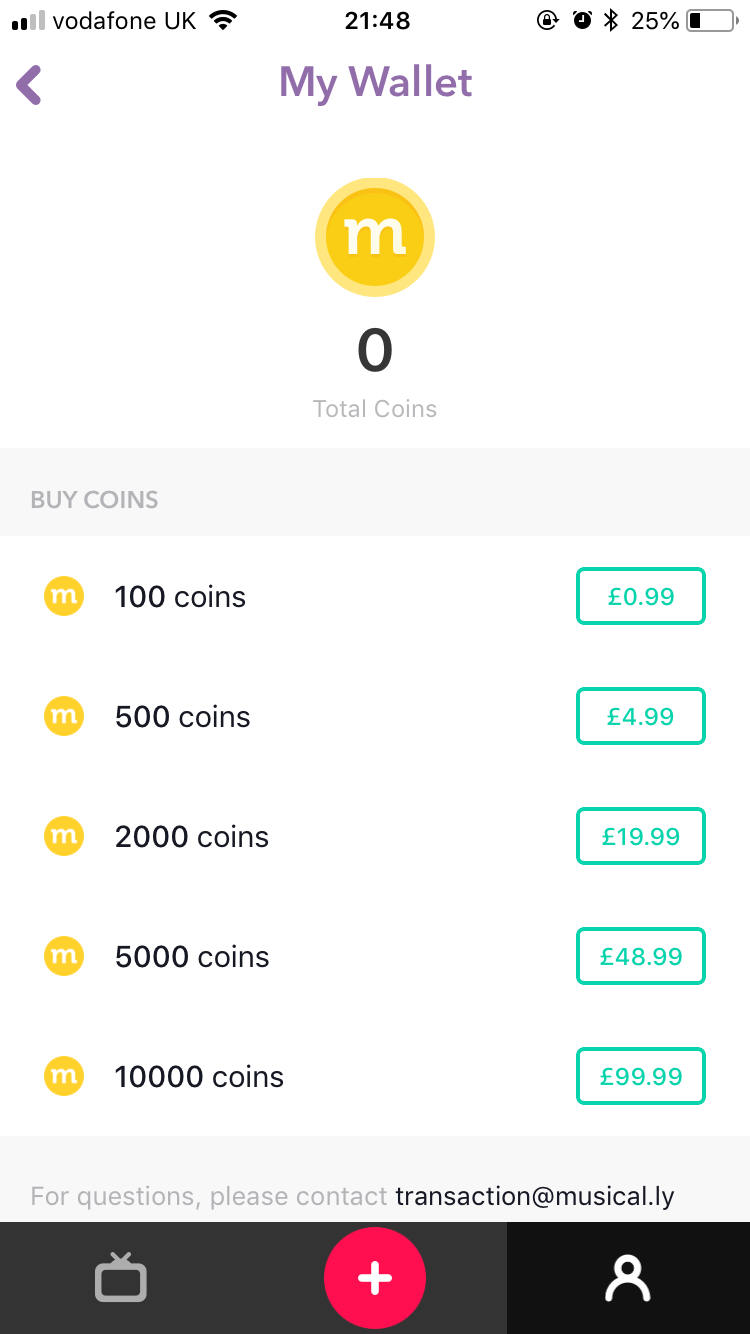 While information about the cost of coins, and subsequently gifts, is clear, what isn’t is what happens to that money after a gift is sent. Most purchases within apps are presumed to go straight back to the app company because, typically, this is how apps earn revenue. However, in Live.ly’s case, a portion of the money is actually sent to the user receiving the gift, meaning it effectively becomes a convoluted form of bank transfer, with Live.ly taking a cut.

This, on its own is not necessarily a problem. Social media stars from YouTubers to Instagrammers to prolific Twitter users, have means of getting financial support from fans in exchange for creating content. There are ko-fis, Patreons, KickStarters, and more that allow people to support their favourite creators by giving them regular financial donations. In return, the creators not only keep creating content, but often give special perks to those supporters who commit larger, consistent sums. Here, funders know exactly where their money is going and receive valued content in return.

But on Live.ly, most users are unikely to be aware of what happens to their money after a gift is sent. Both Musical.ly and Live.ly are incredibly vague when describing how the transaction works. What information exists is tucked away inside the Gifts Points Policy underneath Musical.ly’s Terms of Use, which says only that the transaction will occur through PayPal, with no details about what portion of the money goes to the person receiving the gift.

What makes this all so strange is that most Live.ly videos struggle to even qualify as content, rarely including anything beyond the streamer just asking for gifts in exchange for live shout-outs. Gifts are also often demanded in the style of an auctioneer, which can lead to viewers sending them thoughtlessly on impulse. During quick, rapid-fire requests for certain types of gifts, fans are given a short window, say ten seconds, to send over a particular type of gift in exchange for the streamer to give them a brief shout-out. In droves, kids start sending gifts for a one second hit of hearing their name announced on air, even when a single gift could cost the user up to a real life £50. If you spend any amount of time on the app, you’ll find that, not only is this practice common, this auctioneer-style dominates the majority of the app’s most popular livestreams.

And the thing is, Live.ly isn’t just a space where kids unknowingly convince other kids to give them money in the form of expensive stickers. Some of the most popular stars on the app are fully grown adults tactically making money from young users.

YouTuber Danny Gonzalez highlighted this trend in a video back in March. While watching a livestream from one of Live.ly’s biggest stars, JasonCoffee, who appears to be roughly forty years old, Gonzalez notes that Jason is getting sent hundreds of emoji-loves and gifts, despite the video not really being of anything. 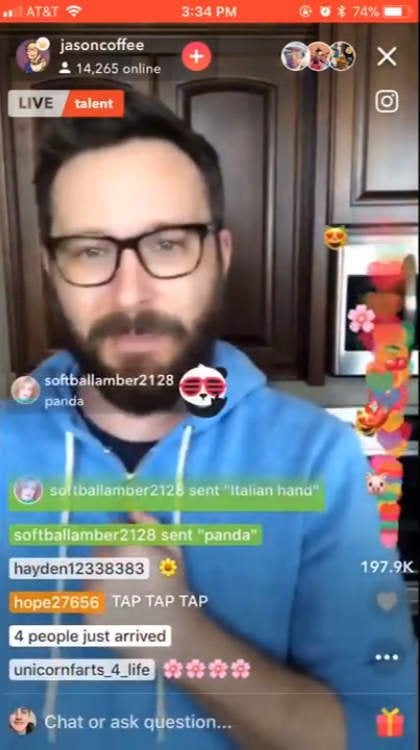 “They’re paying him when literally all we’ve seen him do so far is just ask for likes,” Gonzalez says while watching not just Jason, but several livestreams from popular Live.ly stars. He points out that kids are enticed by getting easy attention from their favourite stars; sucked in by the excitement of a celebrity saying their name aloud in front of an audience which can often reach tens of thousands. The videos offer little else and kids end up spending money for content that’s effectively a live stream of “Hey Sophie! Thanks Jeremy. Everyone send me a panda gift! Thanks for the panda, Mark.” They send gifts without realising the actual cost, in some cases because it’s not their own money that they’re spending. Research has shown that in-app purchases often come out of parents’ pockets.

It doesn’t help that few adults could tell you Musical.ly or Live.ly is. Ask almost anyone who’s out of their early teens about the app and you’re likely to be met with a blank stare. And yet for millions those below the age of sixteen Musical.ly and Live.ly share real estate on their smartphones and are regularly used for sharing and consuming content by and from their peers. The two platforms report 100 million monthly users predominantly in their teenage years or younger, and Live.ly alone said in 2016 that it had more than 40 million active users each day. The lack of understanding among adults, and more importantly, parents, of what Live.ly is, helps keep this all under the radar.

There is of course no suggestion that what people are doing on the app is in any way illegal. Musical.ly did not respond to a request for comment, but by at least acknowledging that the money spent on gifts  is shared with creators its users technically know what they are getting in to. And yet the mechanisms some users are deploying to make money from the platform’s young users seem less than wholesome.

When coming to the end of his nearly twenty-minute video about Live.ly, Gonzalez explains that the problem with the way Live.ly is being used. “It’s manipulating kids,” he says exasperatedly, “And it’s not just the creators, it’s the app… showing [kids] ‘Hey, you can get on this leaderboard if you just spend eight hundred dollars of your parents’ money.’”

Until parents wise up about what’s happening in plain sight on this app, it will remain easy for kids to keep paying big sums to Live.ly stars knowingly draining them of their money. All, ultimately, in exchange for essentially nothing.