This morning’s Sun claims that one of the pallbearers at Margaret Thatcher’s funeral downed a pint of beer with two live goldfish in it. Really, it does: 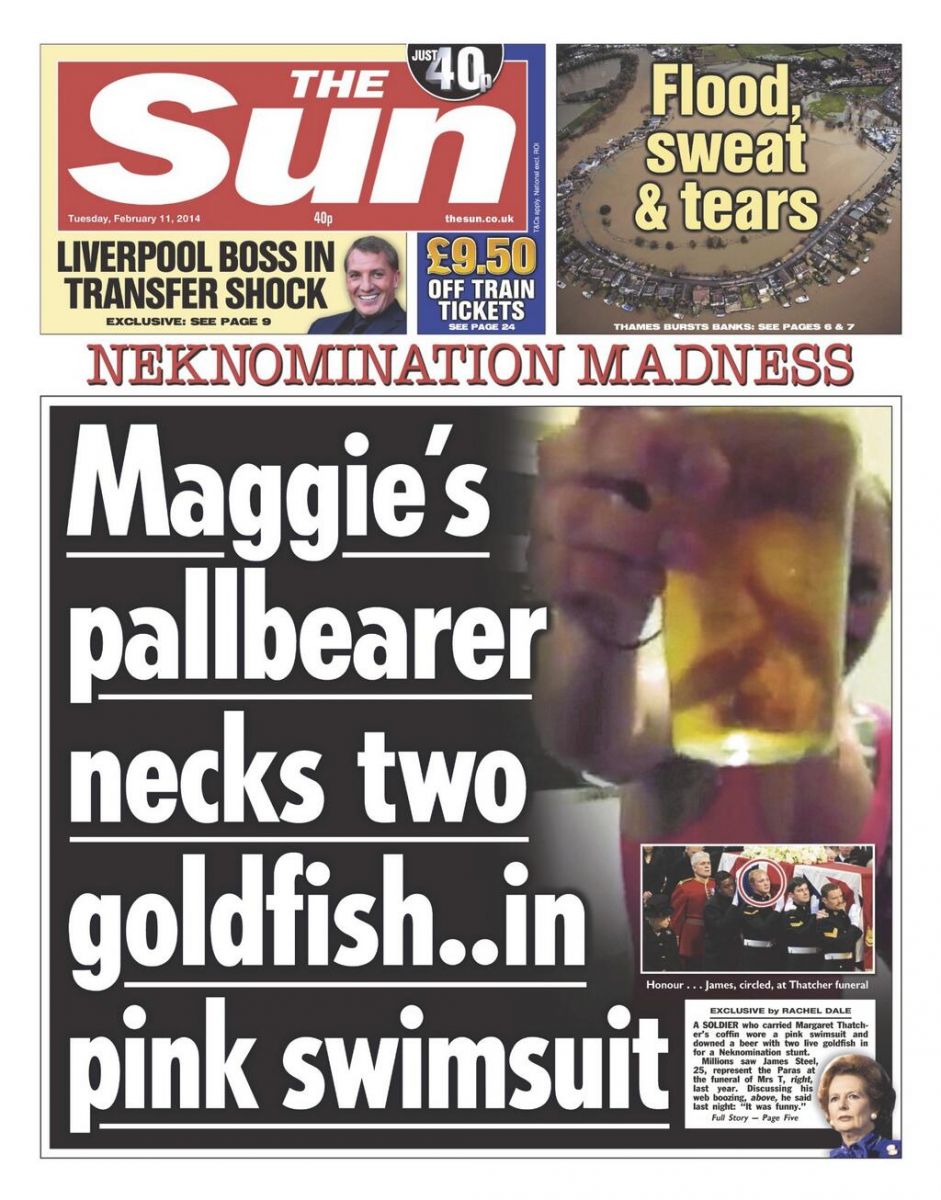 “Neknomination”, for those unaware, is the hot new craze among the young folk. In theory, someone records themselves necking a big drink in one gulp, posts it on Facebook, Twitter, or other social media, and then nominates someone else to take their turn. In practice, it’s a war of one-upmanship, with people going to ever-greater lengths to try and make their drink outrageous – like, say, doing it while skateboarding, or mixing absinthe with hot sauce, or riding a horse into Tesco. Unsurprisingly, it’s causing a full-blown moral panic in the media.

But we’re here today to discuss a more pertinent question: what would happen to a goldfish if you swallowed it? How long would it survive?

A human stomach is a pretty horrible place for a living creature – dark, acidic, and full of nasty gasses from the breakdown of food. Yet we know that a goldfish wouldn’t die straight away thanks to that episode of Jackass where Steve-O swallows and throws up a goldfish, (apparently) unharmed. YouTube’s full of people paying tribute to Mr O, like these students:

While the goldfish survives in the Jackass clip, this one is not so lucky. Don’t do this at home, kids.

Looking through YouTube, we can see that the fish that survive the up-and-down of being tortured by show-offs do so if not in the stomach for a very long time, and also if they’re swallowed with a lot of water. That makes sense, as it would water down the stomach acid and make it less damaging.

It’s also worth saying that the goldfish in the pint glass pictured on the front of the Sun would likely have been dead before before being swallowed. Carbon dioxide is as poisonous for fish as it is for humans, and that’s all the fish would have been breathing in. More than that, though, is that alcohol is commonly used as an effective way to euthanise fish – something clear like vodka, added to a fish tank, will make the fish fall asleep and not wake up.

This is all terribly depressing, so here’s a video of some divers almost getting eaten by two humpback whales (which, while not fish, are here included as de facto allies of the fish kingdom):

(Although, of course, humpback whales have a throat that is about as wide as a grapefruit – who needs anything larger when living exclusively on krill? – and would be incapable of swallowing something as large as a man. Alas.)

UPDATE 12/02/2014: We’ve now heard from marine biologist Alasdair Lindop, who has some more science about a goldfish’s chances:

Generally a stomach would be pretty inhospitable to a goldfish, largely due to the high acid content and you’d need a pretty large amount of water to dilute that to something hospitable for any length of time.

Whilst alcohol would certainly anaethetise the fish, I wonder how long it would take with the percentage of alcohol in a pint. Probably more problematic for the fish would be all the sugars and carbon increased carbon dioxide in the beer. Fish breathe by passing the water (or beer) directly over their blood vessels in their gills, so being in a different solution would certainly stress them out a lot. How long they could survive in an acidic, sugary fizzy environment with a bit of alcohol is not something I could tell you from the top of my head!

The Jackass thing, if I remember correctly, was really quick so although the fish would be stressed, it’s nothing a good dunking in a large bucket of fresh water immediately after couldn’t solve.

So to give a vague answer to your question: it would really depend on what was in the stomach when the goldfish got there. If there was a fair bit of fresh water in there to start with it could probably survive a short while. (I’m guessing 5 mins-ish, but that’s a huge guess!) The amount of food eaten by someone in the hour or so before swallowing the fish will be important, because if the stomach is trying to digest food, the concentration of acid will be much higher.

If that doesn’t kill it, suffocation probably will as what little dissolved oxygen there is will get used up fairly shortly, unless the participant has drunk a fair chunk of water.