The buzz app of the week is Jelly, a social network built around asking questions and answering questions from other people. Its founder is Biz Stone, co-founder of such sites as Medium and Twitter – and indeed, it’s worth thinking of how Jelly works compared to an established Q&A site like Quora as being similar to how Twitter works relative to proper blogs.

If you’re not familiar with Quora – and forgive me for using another like-to-like analogy – it’s similar to Yahoo Answers, but useful. Founded by two of Facebook’s founders in 2009, its links with Silicon Valley gave it a cachet that attracted (and still attracts) powerful, intelligent, connected people with fascinating stories (for example, here’s a thread of people talking about times they met Steve Jobs, or here’s another with millionaires revealing whether getting rich is worth it).

Jelly isn’t a place for detailed questions and answers, and nor is it aimed at only the Silicon Valley elite. It assumes that there are some questions which cannot be answered by using a search engine, and which are instead better served by other people. Hypothetically, even if your friends don’t know the answer, the exponentially larger number of friends of friends will.

So, open Jelly, take a picture of something, and write or draw a question. Share it on Twitter or Facebook, or rely on people within Jelly seeing it. You’ll also see questions that your friends (and their friends) have asked. Here’s how CNN Money sees it:

To follow a question, simply tap the “favorite” star in the upper right corner and notifications will appear within the app. But if you dismiss a question, you can’t go back to it later when you think of the answer or remember you have a friend on Facebook who probably knows it.

Questions also can be shared outside the app and answered via the Web by people who don’t use Jelly. These answers show up as “forwarded by …”

Stone says in the future they’d like to figure out a way to connect names with outside answers, but it isn’t a top priority right now.

Users can also rate answers to their own questions, and to other users’ questions, as “good,” and send virtual “thank-you cards” to helpful respondents.

I downloaded Jelly and asked the first question that came to mind (because obviously): 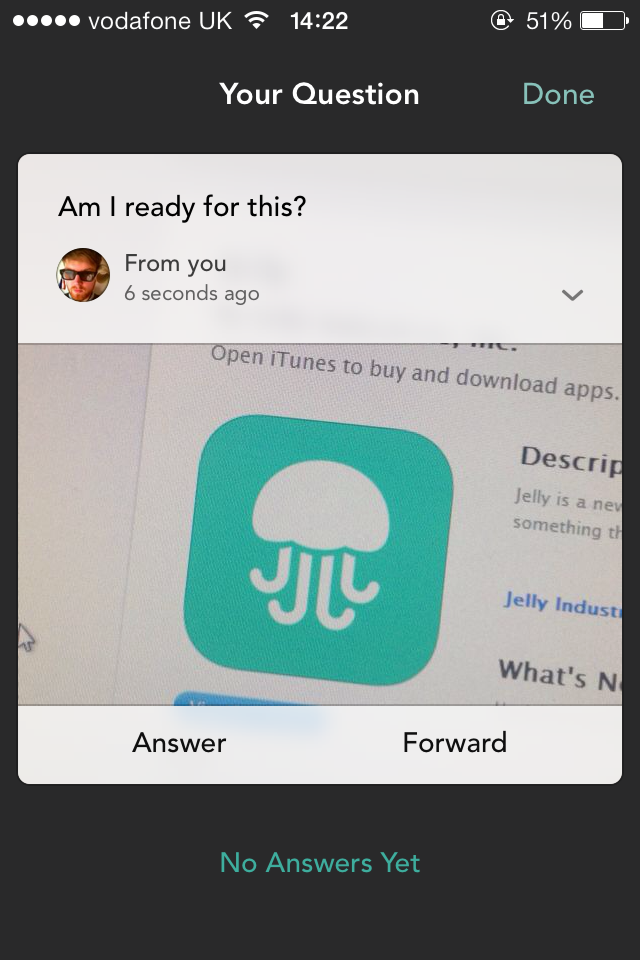 Within seconds I was getting responses (all from other tech journalists trying Jelly out, of course), which was nice, but I can’t say I was too impressed by what everyone else seemed to be using it for. Questions ranged from the practical (like “why is the date dial on my watch not working?”) to the mundane (a picture of a desk and the question “what’s your desk look like?”).

Which brings us to the strangeness of it. Anything that would fit on Jelly – a quick question, accompanied by a picture, that relies on personal know-how – would also fit on Twitter, and it’s always hard to get people to move away from an existing social network that already manages to do something quite well, to do it inside a completely different app.

There are technical problems – no way of filtering for different types of question, for example – which can be attributed to the app’s newness, but it’s hard not to agree with many of the reviews in the App Store that call it a “waste of time”. Clearly, not everyone is ready for this Jelly.