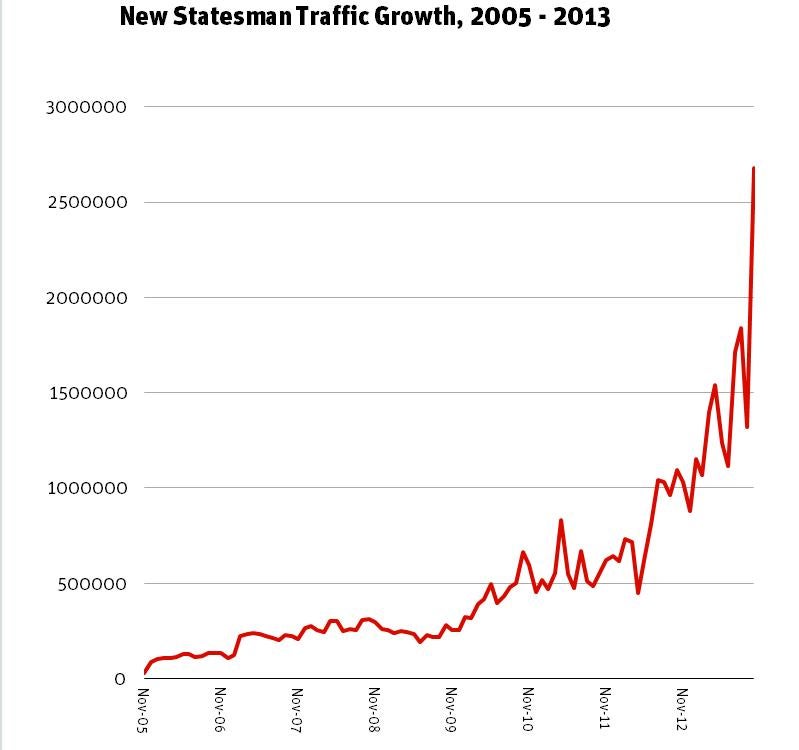 **Unique monthly users of www.newstatesman.com soar past the 2.6 million mark in October after strong online growth all year

**Magazine expands to 72 pages thanks to growing advertising revenue

The New Statesman today announced record traffic to its award-winning politics and culture website in October. More than two and a half million people visited newstatesman.com over the month – a new high which follows strong growth all year and a peak of 1.84 million unique users in August. The latest figures mean the New Statesman now enjoys an online readership more than twice that of the Spectator, sealing its place as Britain’s biggest political website.

Jason Cowley, the editor of the New Statesman, said: “These bumper figures are yet another cause for celebration as we draw near to the end of our centenary year. But these figures are not an outlier: they follow strong growth all year.”

Cowley said: “Since the successful redesign of newstatesman.com two years ago, our in-house team – led by our web editor, Caroline Crampton, and George Eaton, editor of our rolling politics blog, The Staggers – have made sure more and more online readers turn to us to find the very best writing about politics, ideas, current affairs, philosophy, religion and culture. I am delighted that the website has developed its own distinctive identity. Its success mirrors that of the print magazine, which has just expanded to 72 pages this week as a result of buoyant advertising revenues and a significant increase in paid-for circulation. Indeed, subscriptions are more than 20 per cent up [on last year] in 2013.”

Helen Lewis, deputy editor of the New Statesman, said: “Russell Brand’s essay was a huge success for us, with more than half a million hits, nearly 90,000 Facebook interactions and 1,000 tweets. But in the same weekend, we had other, more low-key successes: a piece from our new blogger Ian Steadman which made the front page of Reddit, for example, and a great take on Educating Yorkshire which went viral on Facebook. It’s clear that this is no fluke: our traffic has grown by more than 400% since the site was relaunched in April last year.”

The New Statesman was the first British periodical to launch online (in 1995) and currently publishes all its magazine content online, free to view, a week after print publication. The website combines essays, cultural criticism and reportage with witty, irreverent and polemical blogs and social commentary. More than 40 per cent of the New Statesman’s web traffic is generated by online readers sharing content on social media.

The New Statesman’s powerful online presence has also helped to generate digital subscriptions via its new iPad and iPhone app. The NS app, a smartly designed digital representation of the magazine, has been downloaded by thousands of users since its launch just two weeks ago.

Jason Cowley continued: “Our digital subscriptions, including those on Kindle, are growing rapidly and we are now being read all over the world by people who are interested in good writing, original thinking and progressive ideas. We are especially committed to the essay and to long-form journalism.

“The New Statesman continues to reduce its losses and, because of the success of our centenary year, will be profitable in 2014. It’s a remarkable transformation in the fortunes of this great magazine.”

The NS app is available to download from the iTunes App Store and comes with a free copy of the magazine’s acclaimed centenary double issue of 12 April 2013. Digital subscriptions can be taken out through Apple (annual at £79.99, monthly £7.99, single issue £2.99).