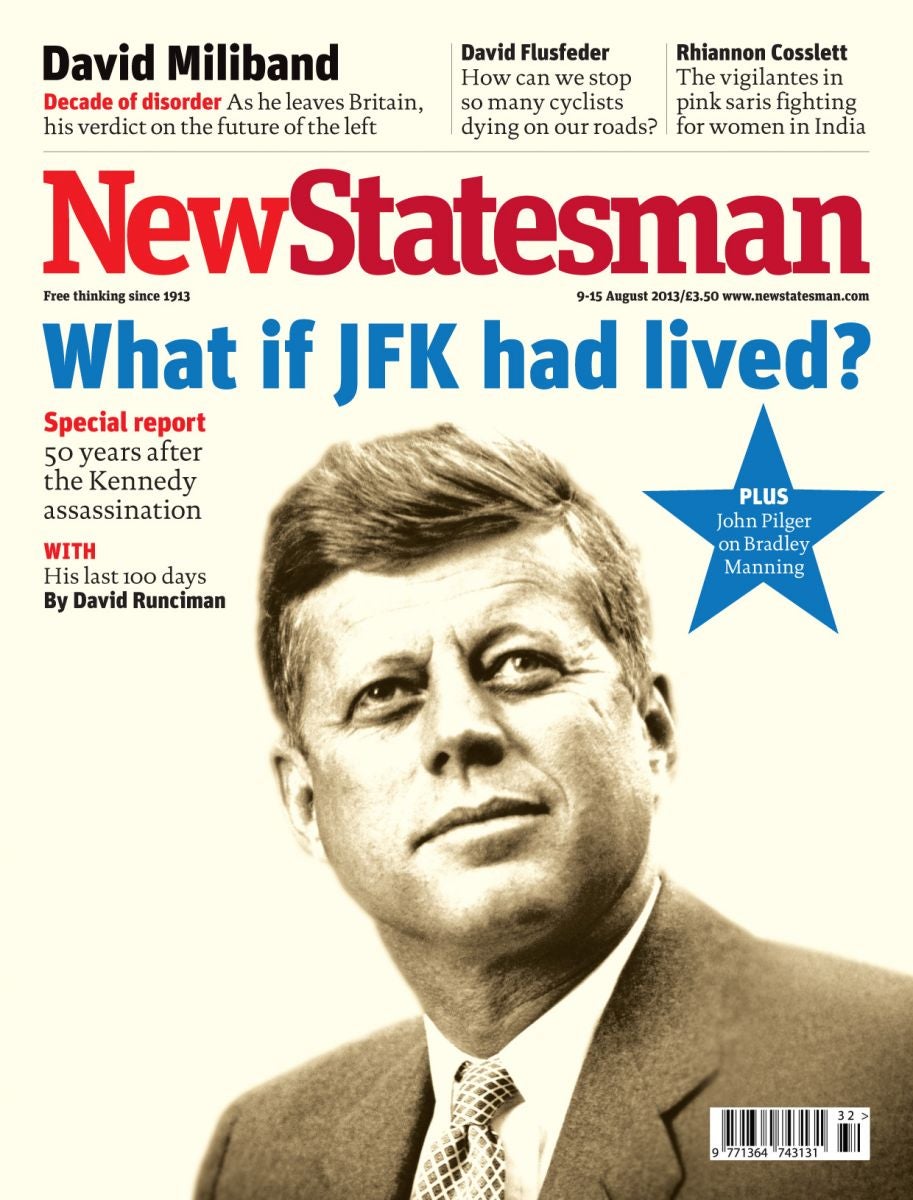 You are invited to read this free preview of the upcoming New Statesman, out on 8 August. To purchase the full magazine – with our signature mix of opinion, longreads and arts coverage, plus columns by Laurie Penny, Will Self, Rafael Behr and John Pilger, as well as our cover features on John F Kennedy and all the usual books and arts coverage – please visit our subscription page
It’s Wednesday morning and I’m still debating whether or not to wear my Jane Austenesque dress down to Hampshire. I’m about to attend a public announcement by the Bank of England that, in response to three months of campaigning for female representation on banknotes, it is instigating a review of its procedures and will in the meantime confirm Austen for the next tenner.
I opt for a simple red dress, concerned that otherwise the media will paint me as some sort of deranged Jane Austen fangirl – which, to be fair, I am. And, as it happens, I end up painted as such in the press anyway.
I head off, purged of Regency regalia, to Austen’s house, where I look forward to being able to announce finally what I’ve known for over a week: that we took on an establishment institution and won.
Standing next to the Bank of England governor, Mark Carney, and the politicians Stella Creasy and Mary Macleod, I think: this is an amazing experience.

But then, suddenly, it isn’t. Among the many good wishes pouring into my Twitter timeline, one @JackRiley92 has decided to let me know that he has taken umbrage at the outcome of my campaign. And he lets me know in a way used by domineering men down the ages when a woman gets a bit uppity: he makes a threat of rape – to be specific, violent anal rape.
This is just the beginning. Over the next couple of weeks I receive a steady stream of violent abuse, including rape and death threats. At its peak I am getting about one threat a minute, with men discussing how they will rape me together, which parts of my body will be penetrated and exactly how they are going to kill me. They are still coming in now – the latest: a death-throughgang- rape threat where I’m told to “KISS YOUR PUSSY GOODBYE AS WE BREAK IT IRREPARABLY”.
I feel like pointing out that if I’m dead, the state of my “pussy” will be the least of my concerns, but it seems a bit pedantic.

The threats are vivid, graphic, horrific. I can’t help visualising them. I stop eating, I can’t sleep, I keep crying from sheer exhaustion and despair at the hatred for women that is pouring relentlessly into my Twitter feed.
While I am in this state, the media come knocking – literally. A London Evening Standard journalist turns up on my doorstep at 10.15pm on Sunday night. My first reaction is a surge of adrenalin and fear; my second, fury at the thoughtless insensitivity. Then back to fear, as I wonder how she has found my address.
For the most part, though, the media are supportive and understanding, if relentless. I am pleased that they are running the story – what is happening to me has happened to too many other people before, without anyone batting an eyelid. It is good to see it taken seriously and I feel it’s my responsibility to speak to as many journalists as I can, in part to put pressure on platforms such as Twitter, and on the police, to take it seriously. If this has to happen to me, I am determined that I will use it to try as hard as I can to make sure it doesn’t happen to anyone else. It’s vital to make sure no one else is silenced.

Perhaps inevitably, given the antipathy towards any woman who isn’t a good, quiet little miss, it isn’t long before soi-disant supporters turn on me. “This is getting boring,” I am told. “Enough now.” I am making people uncomfortable. If I continue to “feed the trolls”, I deserve all I get. Never mind that ignoring or blocking only results in new accounts being set up – or the trolls simply finding a new victim. Never mind that my “trolls” are trying to shut me up. Never mind: take this awkward truth away.
Given the celebrity-obsessed society we live in, it is no surprise that a regular dripdrip of tweets comes through accusing me of “milking” the threats for fame, as if I had somehow invited them. As if I – as if anyone – could enjoy it. Some people, clearly more enterprising than me, accuse me of making money out of the situation. This is a suggestion that has sadly yet to come to fruition.

The past couple of weeks have been surreal. Before the whirlwind of rape threats and press interviews, I was finishing up my MSc at LSE (now deferred) and campaigning for the use of more women experts in the media through the online directory the Women’s Room. The most high-profile thing I’d ever done was run the banknotes campaign – a campaign I started in a moment of rage at yet another decision wiping out women’s contribution to history, hampering the aspirations of young girls growing up without female role models. I was just another anonymous voice in the melee.
Now, I no longer recognise my life. I am suddenly someone with a “platform” and despite the abuse that got me here, this has made me public property. Suddenly I am contacted by anyone and everyone with a grievance or a story to run. I am expected to hold forth on all the ills of the world, I must condemn people and acts on request, and if I don’t, if I am just struggling to keep my head above water right now, I am deemed inadequate – someone to be pilloried.
The response from Twitter is initially woeful: the head of journalism and news, Mark Luckie, locks his account and blocks me personally as a result of people contacting him to tell him about the abuse I am receiving. The police are initially quick to respond but then achingly slow to act. Now, no doubt due to the intense media coverage, they are both acting. Twitter has taken some baby steps towards supporting the victims rather than the criminals, and the police have applied the resources they need to the problem and made some arrests. The next step is to make sure that this is a solution for everyone, not just those with a “platform”.
I don’t know where my life will go from here. I wonder whether the abuse will ever stop. I wonder if I am for ever doomed to be “that rapey girl off Twitter”. I wonder if I will ever gain control over my life again.