When Samsung won its UK court case against Apple earlier this year, the judge ruled that Apple had to take out advertisements in several major UK newspapers, as well as post a notice on its site, stating that the court had found that Samsung did not copy Apple’s phone designs.

The order was stated in exhaustative detail, even specifying the typeface and font sizes which had to be used – Arial 12 and 14 – but the judge failed to mention one important rule: don’t take the piss.

The notice Apple eventually posted was a master of the non-apology form:

Samsung / Apple UK judgment On 9th July 2012 the High Court of Justice of England and Wales ruled that Samsung Electronic (UK) Limited’s Galaxy Tablet Computer, namely the Galaxy Tab 10.1, Tab 8.9 and Tab 7.7 do not infringe Apple’s registered design No. 0000181607-0001. A copy of the full judgment of the High court is available on the following link www.bailii.org/ew/cases/EWHC/Patents/2012/1882.html.

In the ruling, the judge made several important points comparing the designs of the Apple and Samsung products:

“The extreme simplicity of the Apple design is striking. Overall it has undecorated flat surfaces with a plate of glass on the front all the way out to a very thin rim and a blank back. There is a crisp edge around the rim and a combination of curves, both at the corners and the sides. The design looks like an object the informed user would want to pick up and hold. It is an understated, smooth and simple product. It is a cool design.”

“The informed user’s overall impression of each of the Samsung Galaxy Tablets is the following. From the front they belong to the family which includes the Apple design; but the Samsung products are very thin, almost insubstantial members of that family with unusual details on the back. They do not have the same understated and extreme simplicity which is possessed by the Apple design. They are not as cool.”

That Judgment has effect throughout the European Union and was upheld by the Court of Appeal on 18 October 2012. A copy of the Court of Appeal’s judgment is available on the following link www.bailii.org/ew/cases/EWCA/Civ/2012/1339.html. There is no injunction in respect of the registered design in force anywhere in Europe.

However, in a case tried in Germany regarding the same patent, the court found that Samsung engaged in unfair competition by copying the iPad design. A U.S. jury also found Samsung guilty of infringing on Apple’s design and utility patents, awarding over one billion U.S. dollars in damages to Apple Inc. So while the U.K. court did not find Samsung guilty of infringement, other courts have recognized that in the course of creating its Galaxy tablet, Samsung willfully copied Apple’s far more popular iPad.

Predictably, Samsung complained, and Apple has now been given two days to post a new notice. The BBC reports:

Samsung complained that the notice posted by Apple was “inaccurate and misleading” because it added comments about other rulings in Germany and the US that had gone in the iPad-maker’s favour.

“This has received enormous publicity and has perpetuated confusion as to Samsung’s entitlement to market the Galaxy tablet computers in issue,” a Samsung lawyer said in a written statement to judges.

“It has created the impression that the UK court is out of step with other courts.”

It will be interesting to see the new statement that Apple posts. Can they maintain the tone even as the judge intervenes?

Apparently they can’t. Today’s Guardian contains Apple’s updated statement, which has all the legal language and none of the snark. But it is at least in the mandated Arial 14: 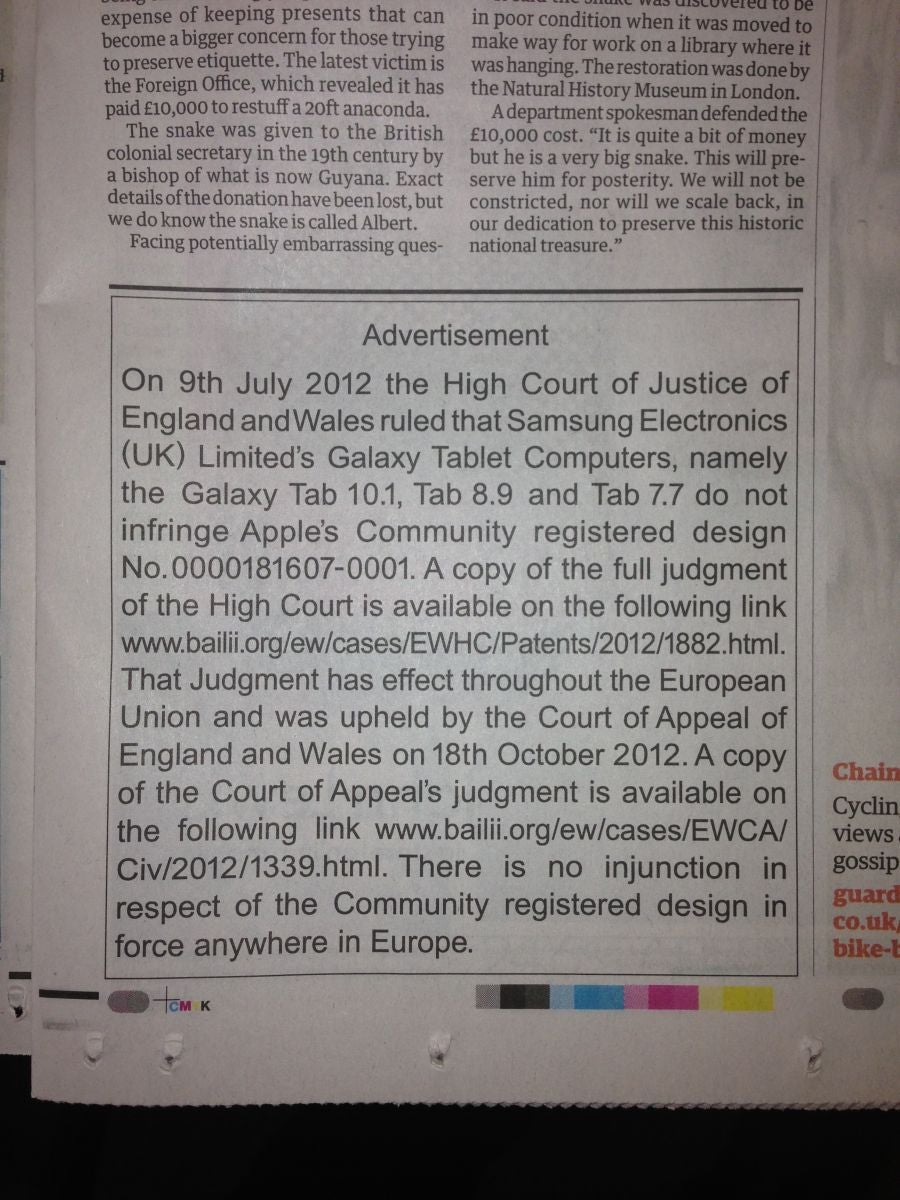