Today’s instalment of “you can’t have anything nice” comes courtesy of Texan comedian Sam Killermann. At the end of June, he set up a website with a simple aim: to allow the vast majority of decent, good human beings who enjoy videogames a forum in which to register their views.

The site was called Gamers Against Bigotry, and it asked readers to sign a simple pledge:

As a gamer, I realize I contribute to an incredibly diverse social network of gamers around the world, and that my actions have the ability to impact others. In effort to make a positive impact, and to create a community that is welcoming to all, I pledge to not use bigoted language while gaming, online and otherwise. Bigoted language includes, but is not limited to, slurs based on race, ethnicity, gender, sexual orientation, and disability.

Killermann added in an interview with The Mary Sue:

At times, and depending on the game you’re playing, it can feel like you’re the only one who is put off by the bigoted speech that’s tossed around in game chat. Every additional pledge is another person speaking up, publicly, that bigoted language isn’t okay.

He clarified elsewhere on the GAB site that he wasn’t against angry swearing, just angry swearing that targeted other gamers for their race, gender or sexuality: “The pledge doesn’t preclude you from making sailors blush, provided you’re making them blush with non-identity-specific four-letter words.”

Or, as geek idol Wil Wheaton put it when he posted a link to the pledge on his Tumblr: “In other words, Don’t be a Dick.”

Killermann backed up his pledge with an IndieGoGo project to raise funds for GAB, expressing his hope of funding attendance at PAX (the Penny Arcade Expo) and creating an app to allow gamers who prefer not to have a side order of rape jokes with their COD multiplayer to find each other.

You know what comes next, don’t you?

The same small sub-group of gamers which tried to silence Anita Sarkeesian for wanting to make some videos exploring sexism was roused again. The stamp of their tiny, privileged feet echoed round the internet.

Within days of launch, Gamers Against Bigotry was subjected to repeated hacking and DDOSing. When I spoke to Killermann yesterday he told me that the big attacks all appeared to come from the IP address 69.69.69. Gamers might not be adolescent boys any more, but some of them like their jokes fairly adolescent.

On 22 July, the hackers took over the site, posting an image all over it (graphic screenshot here). I’ll give you a hint about what that image might be with this delicious cupcake: 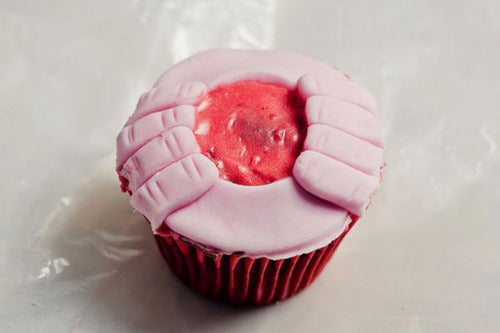 There was also some freestyling racism:

Even more dickishly, the hackers used a code exploit to wipe the database of the 1,500 pledges which had been collected.

At the time of writing, the problem still hasn’t been solved. As Killermann told me: “They’ve gone through and cleared out the database at their own whim a few times these past 20 hours. We racked up 100 new pledges, wiped clean; 20 pledges, wiped clean; and so on. I can’t figure out how they’re doing it, but I’m trying to get some security specialists online to help.”

Whoever was behind this also targeted all of Killermann’s personal sites (his blog and portfolio) with DDOS attacks which overloaded the server.

It’s bitterly inevitable that this has happened – after all, one of the incidents which pushed Killermann to set up Gamers Against Bigotry was the hounding of Anita Sarkeesian for wanting to explore sexism in gaming. But apparently, there are some people out there for whom even having these issues discussed poses an enormous threat.

Happily, Killermann is continuing with the project, and is trying to get hosting for the site which will better stand up to these kind of attacks. He told me: “I really think that the culture has to shift. Right now, ‘trolls’ are celebrated. There are entire social networks dedicated to it. For culture to shift, behavior has to shift. That’s where GAB, and other organizations that will likely follow in our footsteps, comes in.”