Something wonderful happened on the internet this week. And something horrible happened at the same time.

A Californian blogger, Anita Sarkeesian, launched a Kickstarter project to make a web video series about “tropes vs women in videogames”. Following on from her similar series on films, it aimed to look at women as background decoration, Damsels in Distress, the Sexy Sidekick and so on. Her pitch is here:

Sarkeesian was after $6,000 to cover the cost of researching the topic, playing all kinds of awful games, and producing the videos. Seems reasonable, doesn’t it? Even if you don’t like the idea – or don’t believe that women are poorly represented in games (in which case, you would be wrong) – then isn’t it fine for other people to give money to something they believe in?

Except some kind of Bastard Klaxon went off somewhere in the dank, moist depths of the internet. An angry misogynist Bat Signal, if you will. (It looks like those charming chaps at 4Chan might have had something to do it.)

In Sarkeesian’s own words:

The intimidation and harassment effort has included a torrent of misogyny and hate speech on my YouTube video, repeated vandalizing of the Wikipedia page about me, organized efforts to flag my YouTube videos as “terrorism”, as well as many threatening messages sent through Twitter, Facebook, Kickstarter, email and my own website.  These messages and comments have included everything from the typical sandwich and kitchen “jokes” to threats of violence, death, sexual assault and rape.  All that plus an organized attempt to report this project to Kickstarter and get it banned or defunded.

Let’s take a look at that Wikipedia page, shall we? 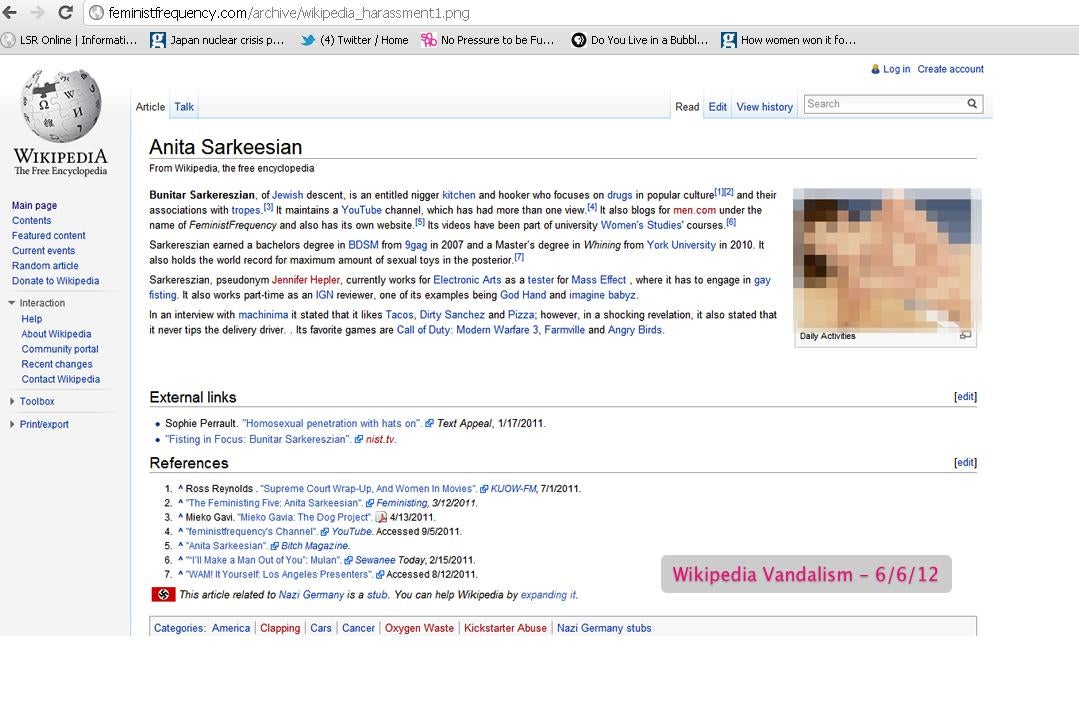 As the pixellated pinkness might suggest, that’s what tabloids call a “sex act” happening in the top corner. There are also references to Sarkeesian being “of Jewish descent”, an “entitled nigger” and having a “masters degree in Whining” (because why stick to one prejudice, when you can have them all?) More than a dozen IP addresses contributed to this vandalism before the page was locked.

Meanwhile, her YouTube video attracted more than 5,000 comments, the majority of them of a, shall we say, unsupportive nature. The c-word got a lot of exercise, as did comments about her personal appearance, and a liberal sprinkling of threats of violence.

Sarkeesian archived a picture of the abuse, and you can find it here. I’m sorry to subject you to it, but I think it’s important that you see the kind of stuff you can get called for the crime of Being A Woman On The Internet. Shall we play sexism bingo? Here goes:

LESBIANS: THE GAME is all this bitch wants

Why do you put on make-up, if everything is sexism? … You are a hypocrite fucking slut.

Would be better if she filmed this in the kitchen.

I’ll donate $50 if you make me a sandwich

… and so it goes on. The only light relief is this one, because I don’t think this is quite the threat this chap thinks it is:

Sarkeesian decided to leave the comments on her video, as proof that such sexism exists. I think it’s important that she did, because too often the response to stories like this, “Come on, it can’t be that bad”. There are two reasons for this: first, that if you don’t experience this kind of abuse, it’s difficult to believe it exists (particularly if you’re a man and this just isn’t part of your daily experience). Secondly, because news reports don’t print the bad words. We’ve got into a weird situation where you have to get a TV channel controller to sign off a comedian using the word “cunt” after 9pm, but on the internet, people spray it round like confetti. We read almost-daily reports of “trolls” being cautioned or even jailed, but often have no idea what they’ve said.

This story should be shared for several reasons. The first is that a horrible thing happened to Anita Sarkeesian. She did nothing to deserve the torrent of abuse, and the concerted attempts to wreck her online presence. It’s not the first time this happened: Bioware’s Jennifer Hepler was similarly hounded out of town for expressing some fairly innocuous statements about videogames. Every time this happens, more women get the message: speak up, and we will come for you. We’ll try to ruin your life, tear you apart, for having an opinion.

The second reason this story deserves wider attention is that in Britain, a law is being debated which will encourage service providers to identify internet trolls, without their victims having to resort to costly legal action. Until now, the perception has been that you can say anything you like on the internet, without any consequences. Recent cases, such as that of Liam Stacey (jailed for mocking footballer Fabrice Muamba) show that is getting less and less true.

A man who targeted Louise Mensch was yesterday given a suspended sentence, and banned from contacting a list of celebrities. Few papers reported Frank Zimmerman’s full remarks, with the notable exception of The Guardian: they included a reference to the film Sophie’s Choice, in which a mother is forced to choose which of her children dies, and the following: “We are Anonymous and we do not like rude cunts like you and your nouveau riche husband Peter Mensch…  So get off Twitter. We see you are still on Twitter. We have sent a camera crew to photograph you and your kids and we will post it over the net including Twitter, cuntface. You now have Sophie’s Choice: which kid is to go. One will. Count on it cunt. Have a nice day.”

We can argue all day about the sentence handed to Liam Stacey, but Frank Zimmerman made an unequivocal threat. He no more deserves anonymity than those who targeted Anita Sarkeesian with rape and death threats. But, of course, they will never be found out.

I said at the top of this blog post that something wonderful happened on the internet this week, at the same time as something awful. You’ll be pleased to know that Anita Sarkeesian’s Kickstarter project has gained 2,301 backers and a total of $55,671 at the time of writing. It’s more than enough for her to make a whole series of shows about tropes and women in games, and luckily, she still plans to do so despite all the abuse.

I am certainly not the first woman to suffer this kind of harassment and sadly, I won’t be the last. But I’d just like to reiterate that this is not a trivial issue. It can not and should not be brushed off by saying, “oh well that’s YouTube for you“, “trolls will be trolls” or “it’s to be expected on the internet”. These are serious threats of violence, harassment and slander across many online platforms meant to intimidate and silence. And its not okay. Again, don’t worry, this harassment will never stop me from making my videos! Thank you for all your support!