Misted with condensation, the Hub @75 is sandwiched between a fried chicken shop and a pharmacy on a small high street in west London’s White City. The shop fronts make up the ground floor of a redbrick low-rise block of flats, nestled in the area’s warren of council estates, modern developments and rows of houses.

Rain slaps down on the pavement as multiple people walk in and out of the Hub – it’s a foodbank drop-in, so visitors enter for everything from a chat over a cup of tea to an emergency parcel of food that will feed them and their family for the next three days.

The centre is run by the Hammersmith & Fulham Foodbank charity, and open six days a week. This wet afternoon, people sip soup or eat slices of cake at the smattering of tables in the brightly-lit, cramped front room as the six volunteers give advice and put boxes of donations together.

“There is no other way of surviving”

Other visitors sit at a bank of computers along the back wall. There are IT and employment workshops here as well as law and housing advice, cookery classes and board game and knitting afternoons.

The number of people who come in is rising, as it is across the country according to the anti-poverty charity Trussell Trust’s foodbank network. This financial year, the Hub has given the equivalent of 66,000 meals to 6,650 recipients – up from 6,050 last financial year. 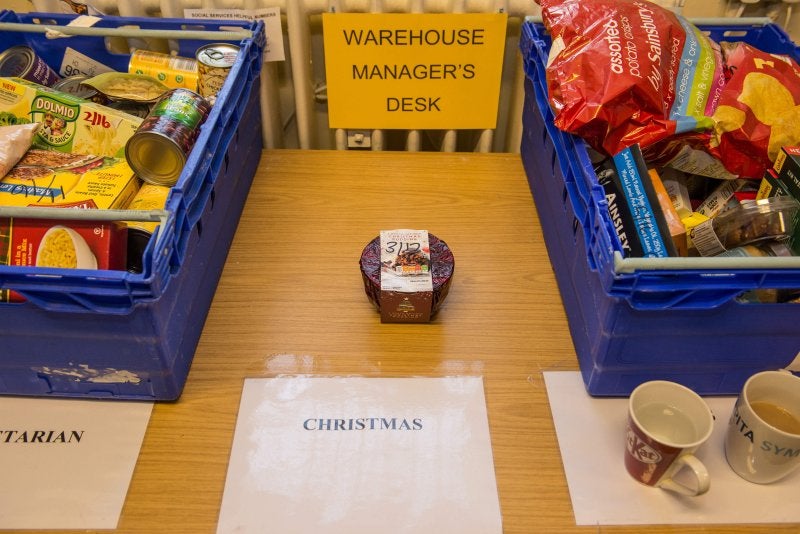 Christmas food to be restocked at a food bank. Photo: Getty

But you don’t need stats to see this is an overstretched operation. In the office behind the main room, no surface is left empty – the manager’s desk, cabinets and fold-out chairs host a portable hob, bottles of vegetable oil, crumpled stacked boxes of Scrabble, Draughts and other games, clear plastic boxes filled with honey, mince pies, more cooking oil, and three boxes contain sewing machines. An enormous printer towers over proceedings in the back left corner.

“They’re making all these houses, but not for us”

Daphine Aikens, who founded this charity in 2010, is sitting at the desk, fielding constant texts and questions from volunteers who pop their heads round the door. She wears tortoiseshell glasses and a stripy scarf over her grey jumper. A hat and gloves dry out on the radiator opposite. December sees people coming in for warmth as well as food.

“We used to be very much more of a crisis service – you’d see somebody two or three times,” she tells me, looking up data about visitors on the desktop.

“Whereas now, it’s like we’ve seen you coming in for ten weeks. Because actually they’ve got no money coming in, and no other way of surviving without three days’ worth of food coming in from the food bank.”

Nursing a cup of tea at a table by the window, Maurice Ephraim is in today because he’s homeless. He slept on the steps of a nearby housing block last night. The 63-year-old was evicted from his flat eight years ago, and has stayed with friends, sofa-surfed and slept rough ever since – remaining in this borough, where he has always lived, near his mother and ten children.

“The government is not doing enough to help homeless people,” he says. “They’re making all these houses, but not for us. What’re we getting out of it? It doesn’t make me very happy.”

Regeneration in this part of the capital has been patchy, with a 2009 study by the LSE finding White City to be one of the “most deprived areas of the whole country”.

Part of the borough of Hammersmith and Fulham, pockets like this are often overshadowed by the wealth of neighbouring areas (affluent Holland Park is just two stops away on the Central Line). Locals like Ephraim, who worked as a machine operator for 36 years, are overlooked. 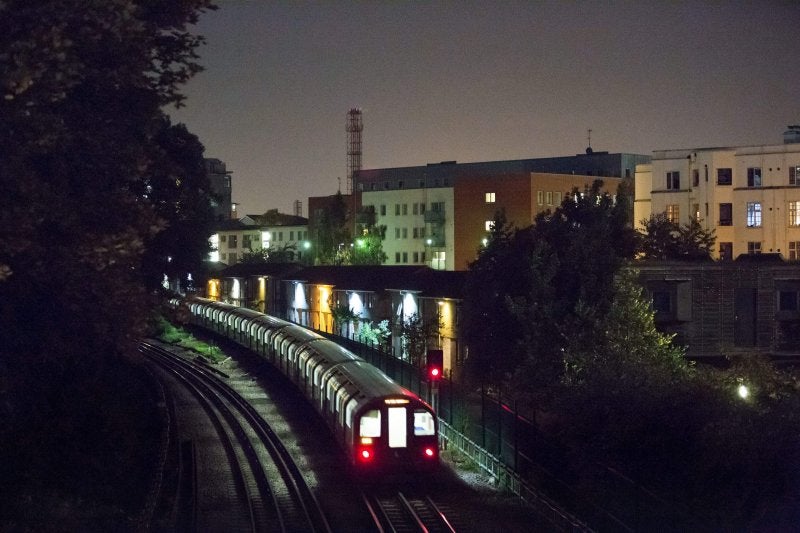 Ephraim is on pre-Universal Credit benefits, but finds the money “does not stretch as far” as it used to with “prices going up every time, and they do not come down, they stay up”. He will have Christmas dinner this year at the town hall, which hosts lunch for residents over 60. “Christmas isn’t the same anymore,” he tells me. “It’s like an ordinary day, to be honest.”

Searching through job listings on a computer in the corner, 48-year-old Ian has been unemployed for a year. He was a shift engineer in the hotel industry and wants to get back into work; he is now on Universal Credit – the new benefits system that is being rolled out nationally. “The first thing I did [when I lost my job] was sign on, on the Monday,” he tells me. “The frustration I had is you’ve got to wait.”

Ian waited nine weeks for his benefits to come in. “It’s frustrating, it held everything back – rent, and then I had to get food vouchers for the food here,” he tells me. He has a son in his twenties and will be spending Christmas with family – but it feels different this year, without money. “Christmas is only one day,” he sighs, turning back to the screen.

Aikens says “a lot” of the reason why she has so many more clients than last year is to do with the “long wait for Universal Credit”.

With an initial six-week inbuilt delay to payments, revised down to five weeks starting next year, people who rely on benefits are being left in the lurch for long stretches – and have no money to eat. Foodbanks in areas of full Universal Credit rollout have seen a 16.85 per cent increase in referrals (more than double the national average), the Trussell Trust calculates. 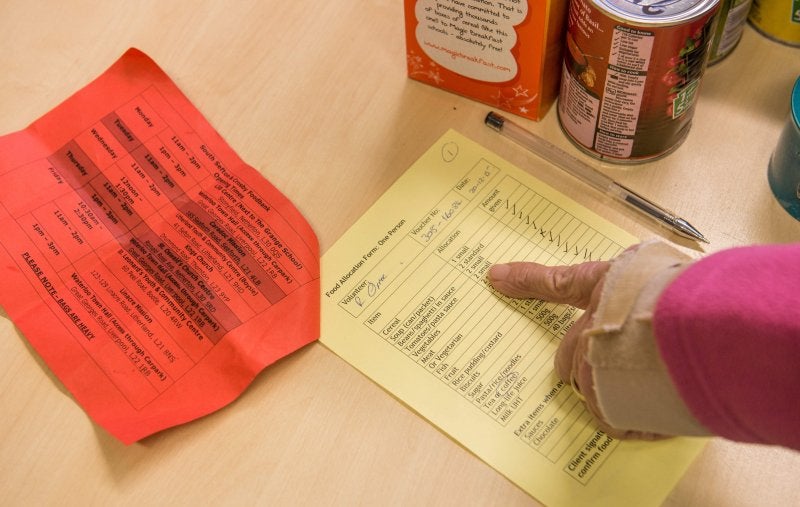 Lists of food to check off at the food bank. Photo: Getty

Advance payments, which are upfront loans that you pay back via a reduction in your monthly benefits, are available under Universal Credit if you can’t get through the waiting period. But many are still left uninformed by the Jobcentre that this back-up support is available.

Out of house and home

These problems have led to some anti-poverty campaigners and the Labour party calling for Universal Credit’s rollout to be paused and fixed, so it works the best it can for claimants – tens of thousands of whom will have to take out loans to have any money over Christmas.

“I know Christmas is about family, really, it’s not about presents and stuff like that, but it’s for the kids – the advance payment stuff definitely doesn’t help with that; it just covers your needs to live,” says Joe Coker, who is crowdfunding money via GoFundMe for his brother, whose family has just been moved to temporary accommodation hundreds of miles from home due to Universal Credit withholding their housing benefit.

“The main thing is the kids; this hurts them”

Coker wants them to be able to “go back home for the festive period” and give his two nephews, who are six and seven, “the Christmas they deserve”.

“It’s despicable, really,” he tells me. “The main thing is the kids; this hurts them. Later on in life, they’ll look back and remember these sorts of things. It’s a mental scarring the government doesn’t seem to see; they’re just a number on a piece of paper.”

Under the old system, housing benefit was paid straight to the landlord, whereas Universal Credit pays claimants directly. This means the payment delay leaves many without rent and vulnerable to eviction.

One woman I speak to – Mary*, 39, who works two jobs and has a seven-year-old daughter – faces eviction and has no idea where she will be housed next. This is because of a mistake in the system when she moved over to Universal Credit (which is notorious for glitches and delays) in September, which left her without rent.

“Six weeks passed [after I applied] and nothing happened,” she tells me over the phone. “I started contacting them, checking my [online] journal – still delayed. I wasn’t qualified for an advance payment as I was working.”

Eventually, she received her first payment, which was only £171. The £900 of rent she required was nowhere to be seen. She was taken to court by her landlord, she lost both her jobs, and is evicted a week after we speak. “I don’t know where the council’s going to take me to,” she says. “I haven’t got time to help my daughter with her homework; I can’t even take my daughter out.” 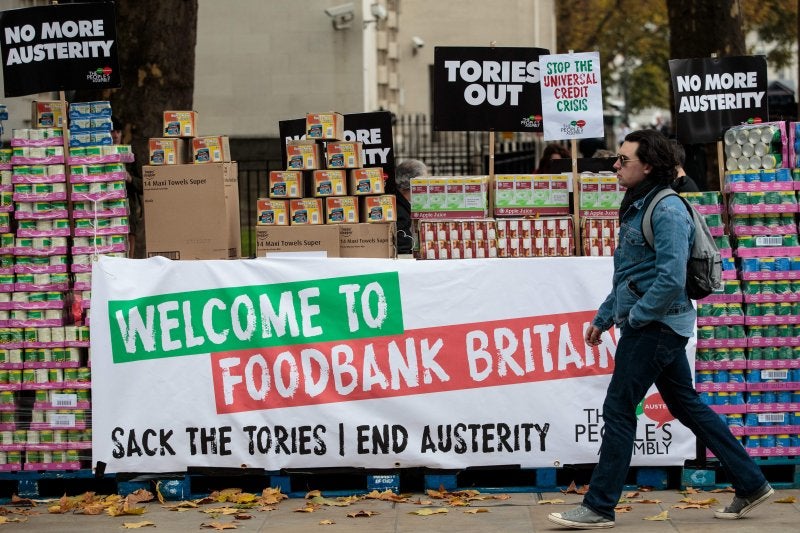 She says Universal Credit is “more than worse” than the old system: she receives less money, and has calculated that it costs her more to work. “Under child tax credits and housing benefit, it encouraged me to work, I had time to look after my daughter and some money at the end of the month.”

Families with children have lost out more than any other group from the welfare reform, as the new system is less generous than the last according to the Office for Budget Responsibility. The government’s welfare cap has meant freezing benefits, which has led to a real-terms cut. This makes the festive season particularly tough, even if you have Universal Credit coming in.

“They’re hitting people they should be helping”

“The Christmas period has obviously more financial pressure,” says Sumi Rabindrakumar, a research officer at the single parent charity Gingerbread. “There’s not going to be much let-up. Universal Credit for single parents is much less generous than the previous system.”

Single parents on average lose around 7 per cent – about £1,300 of their income – under Universal Credit, according to the charity’s research. “They’re hitting the people that Universal Credit should be helping – working, low-income families,” adds Rabindrakumar. 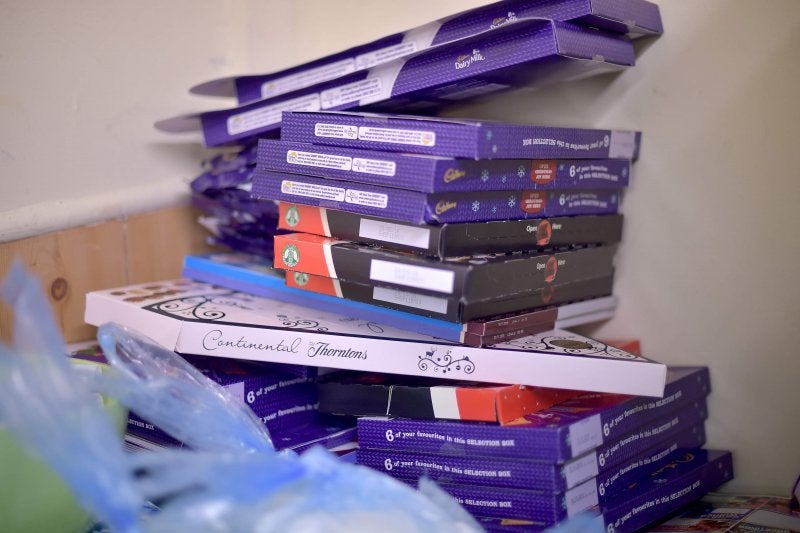 A pile of Christmas selection boxes at a food bank. Photo: Getty

The Hub has been stockpiling Christmas gifts as well as food for weeks, with donations from companies and individuals. From hats and gloves and Lynx bodycare sets to books, jewellery and perfume to big boxes of Lego and dolls’ houses, the Hub’s store room is peppered with treats as well as its usual crates of rice and tinned tomatoes.

“Just any little thing we can do to help make this period a little bit easier for people,” says Aikens, showing me the volunteers putting food parcels together.

With their allocated ingredients for ten balanced meals, visitors can also choose between tea and coffee, two toiletries (out of toothpaste, deodorant, soap and razors), and get one toilet roll each. And this month, piles of advent calendars and colouring books perch on a table at the end of the storeroom, ready for Christmas. But they feel like the sign of a country in crisis, rather than poised for celebration.

*This name has been changed on request of anonymity.