In 1986, when the future TV producer Jörg Winger was 17 years old, he went on a school trip to visit east Berlin. Having grown up in rural Cologne, near the Belgian border, life behind the Iron Curtain had been distant for him until that trip.

He was struck by the cameras on top of buildings. “Oh my god, they’re watching their own people,” he thought at the time.

Thirty-three years later, the second series of the hit show about an East German spy that he created with the screenwriter and his wife Anna Winger is set in the same year, 1986.

Its predecessor, Deutschland 83, became the most-watched foreign-language drama in British TV history when it aired in 2016.

The Conservatives are destroying themselves – and the British economy

But rather than the horror he felt at the German Democratic Republic’s (GDR) surveillance state, Jörg is concerned today about modern-day curbs on our freedom.

“They had no freedom, it was awful,” he tells me over the phone with Anna before the second series is released on Channel 4’s foreign drama platform, Walter Presents.

“We all have our smartphones with us and most of our cities are under total surveillance and our homes are surveilled by Alexa or Siri,” he says. “It’s amazing how we have given in to surveillance – which, it’s true, doesn’t use the data in the same way as the East Germans, where you ended up in jail very easily – but it is still something we’d like to tackle.”

Laughing, he adds: “Full disclosure: this is an Amazon show in Germany.”

When Amazon sent the Wingers, who live in Berlin, an Alexa (a voice-controlled virtual assistant system) as part of their marketing, Anna recalls her incredulity. “We were like, ‘err, I’m not sure if we want an Alexa system!’” she laughs.

“We have so many scenes where people have wires. It’s so funny how we live in a time how everything is wired with microphones and no one thinks about it. We were like: ‘Have you watched the show?’ They said they’d send a guy to set it up. ‘You’re gonna send a guy to set up recording devices all over my house?’”

Threats to privacy are just one aspect of modern life the Wingers have become increasingly aware of while televising Soviet communism’s last gasp.

The 10-part series sticks to a real historical timeline and is based on events they’ve dug up from the archives and anecdotes from advisers to the show, who worked in or with the security services at the time.

The characters, like the perpetually baffled and morally compromised protagonist, Martin Rauch (played by Jonas Nay) – an East German border guard who is co-opted into the foreign secret service – and some of their antics are imagined.

Deutschland 86’s first episode opens in apartheid South Africa, where the cash-strapped GDR uses its allies in the African National Congress (ANC) to help fix an illicit deal between two of its enemies: selling West German weapons to South Africa in order to bomb… communists in Angola.

Confused? So is our hero, Martin, who asks: “East, West – who are the good guys?” 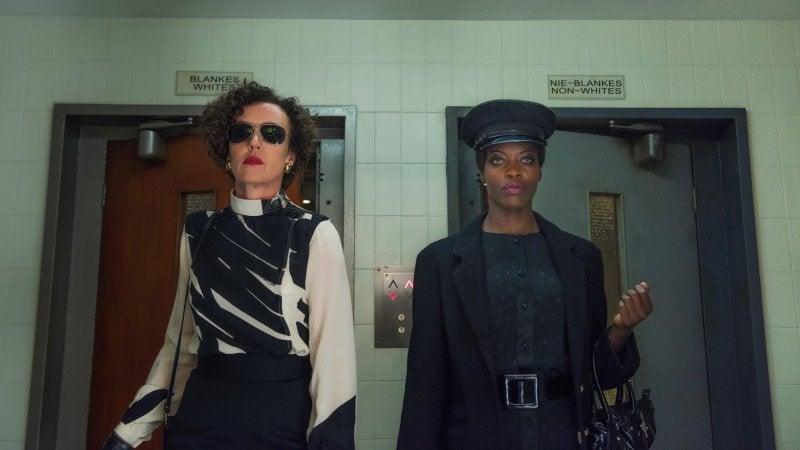 It’s a scenario that shows the desperate and contradictory lengths East German agents overseas were willing to take to fund their dying regime.

The Wingers worry that these excesses, and the apparent triumph of capitalism, have led to today’s “out of hand” financial system.

“The headline for ‘86 very soon became how the communists tried to save communism by becoming hyper-capitalists,” says Jörg. “They established this Mafioso-style capitalist system around the world and were trading weapons, art, refugees, blood, name it.”

He feels this resonates with the modern world.

“We have the one per cent and then the 99 per cent who get increasingly angry, and rightfully so. It’s a reminder not to forget the complexities of the past. The GDR was not sustainable, and now I think certain things are not sustainable and hopefully we’ll come up with something new.

“I think once communism was defeated, which really didn’t work for many reasons, they [the West] thought now the recipe is more capitalism. So we believe that our present had its roots in the end of the Cold War.”

Anna recalls learning about the history she is now dramatising when she was at school, growing up in the United States. Having researched all sides of the Cold War for the TV series, she now sees it very differently.

“I feel especially as an American, even in West Germany it’s the case, we’d been taught that the Cold War was very black and white and now we’re living in very complicated times when everything is really murky,” she says.

“But when we started looking at the Cold War, it wasn’t that black and white, it was also pretty murky too… there’s a misconception often that the West won the Cold War, but it’s also that the East lost it because they ran out of money and we wanted to track that.

Critics speculated that this nuance in the first series was off-putting to German audiences. Indeed, the actor Nay told me at the time that such recent history is a “grey zone”, and that it might “take time” for German viewers to “accept” the series.

When the last Deutschland 83 episode aired, it had lost half its initial German audience – despite being an international hit. The Wingers tell me this was because “people didn’t find it” on the original broadcaster, and cite Amazon’s purchase of two new series as proof of its popularity in Germany.

“The interesting thing about Deutschland 83 as well as 86 is that the series itself rarely takes a moral stance,” says actor Maria Schrader, who plays Martin’s ice-cold Stasi ideologue aunt Lenora. She grew up in West Germany and says she finds audiences from the West and East both enjoy the show.

“There is a certain twinkle in the eye of the series, a certain heightened approach, a certain humour, on the verge between pure fiction and reality and fun,” she says, calling this tone “rare” and “really different” from the usual way German filmmakers and TV producers “approach recent German history”.

“It feels like the series doesn’t carry the weight of history on its shoulders; it doesn’t try to take moral stands. It combines terrible things with humour – that is not very German,” she tells me. “It doesn’t condemn the GDR, it allows a colourful life; I love the complex picture that is painted. That you cannot tell ‘these are the good ones, these are the bad ones’.”