This mole, although attempting all week to eject that frankly petrifying lyric, “We can trade with the world again/When Nigel is at Number 10″ from its head, has spotted Part 97 of the Ukip calypso story in today’s Independent.

In today’s paper, Nigel Farage has a column, under the title “Another Voice” (as if he hadn’t already made this nation petrified of anything he considers “the other”) in which he mocks critics of the Ukip calypso, a song written, merrily sung, defended, than apologetically withdrawn, by Radio 1 DJ Mike Read.

Expressing his disbelief that people feel offended by the song’s nasty lyrics and mock-Carribean accent, he wrote:

If you were to play the Ukip Calypso song to me now and say, “Mr Farage. . . knowing what you now know, would you still endorse the track?” I’d say yes. Because it brought a lot of people a smile, and it was released with the best of intentions.

I wonder if, given hindsight, the same people who took the decisions which led to the calamity in Rotherham could say the same thing.

To suggest that people can’t be concerned with TWO THINGS at the same time is ridiculous and lazy, but the worst part is that he could have chosen any harrowing news event, perhaps more recent and topical, but opted for Rotherham.

This is dog-whistle politics at its most crass; he chose to bring up a tragic story, which his party shamelessly exploited during its Heywood and Middleton by-election campaign by blaming Labour’s “reluctance” to address immigration for child abuse perpetrated by those of predominantly Asian origin.

The bigger question is why would the Independent run such a piece? It’s not just an online rant either; it appears in the paper copy. Here it is: 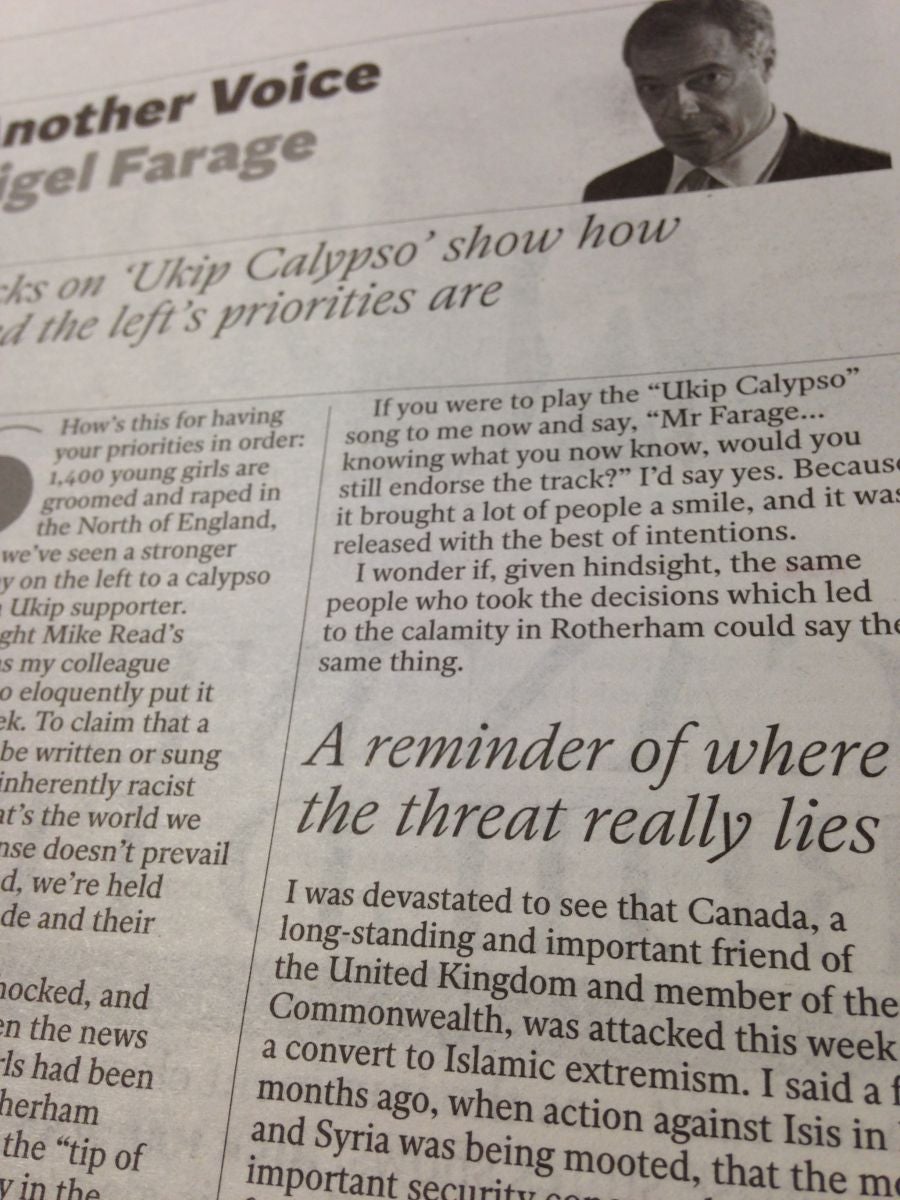 The editor, Amol Rajan, defended his decision to give Farage a column back in 2013. It’s about “diversity of opinion”, he said. And also that it’s fine because the Ukip leader enjoys cricket:

Mr Farage . . . is a cricket nut, and the more of them in our pages the better, frankly.