The Liberal Democrats have made two closely linked announcements. Firstly, they pledged to raise the threshold at which individuals start to pay National Insurance (NI) on their earnings, which currently stands at £7,956. This is to move it more in line with the personal allowance (PA), which is currently at £10,000 and scheduled to increase by £500 at the start of the next tax year.

The problem with the Lib Dems proposal is the other part of their plan; they will only act on the NI threshold when further increases in the PA have taken place, moving it to £12,500 over the next parliament. This, it is claimed, would save basic rate taxpayers £400, and, in the words of Danny Alexander, would be a tax cut “that rewards people particularly working on low and middle incomes“.

There are three major problems with this second announcement.

How to nationalise water by stealth

Secondly, raising the personal allowance tends to benefit families on higher incomes the most, those on middle incomes less so, and those on the lowest incomes hardly at all. This is because those on the highest incomes are the most likely to have two taxpayers, and those at the bottom of the income distribution are either not in work or not earning enough to pay tax. Any increase in the personal allowance from its current level does not help them at all. The chart below illustrates the distribution of gains from a PA increase of £500, estimated at the time of the budget. We would expect a similar pattern to hold from a rise to £12,500. One method that has been used to limit the gains to those on the highest incomes has been to reduce or fix the threshold at which workers pay tax at 40 per cent, but this itself has been controversial, with the OBR’s estimate that one in three may end up paying the 40p tax rate by 2033 causing concern. 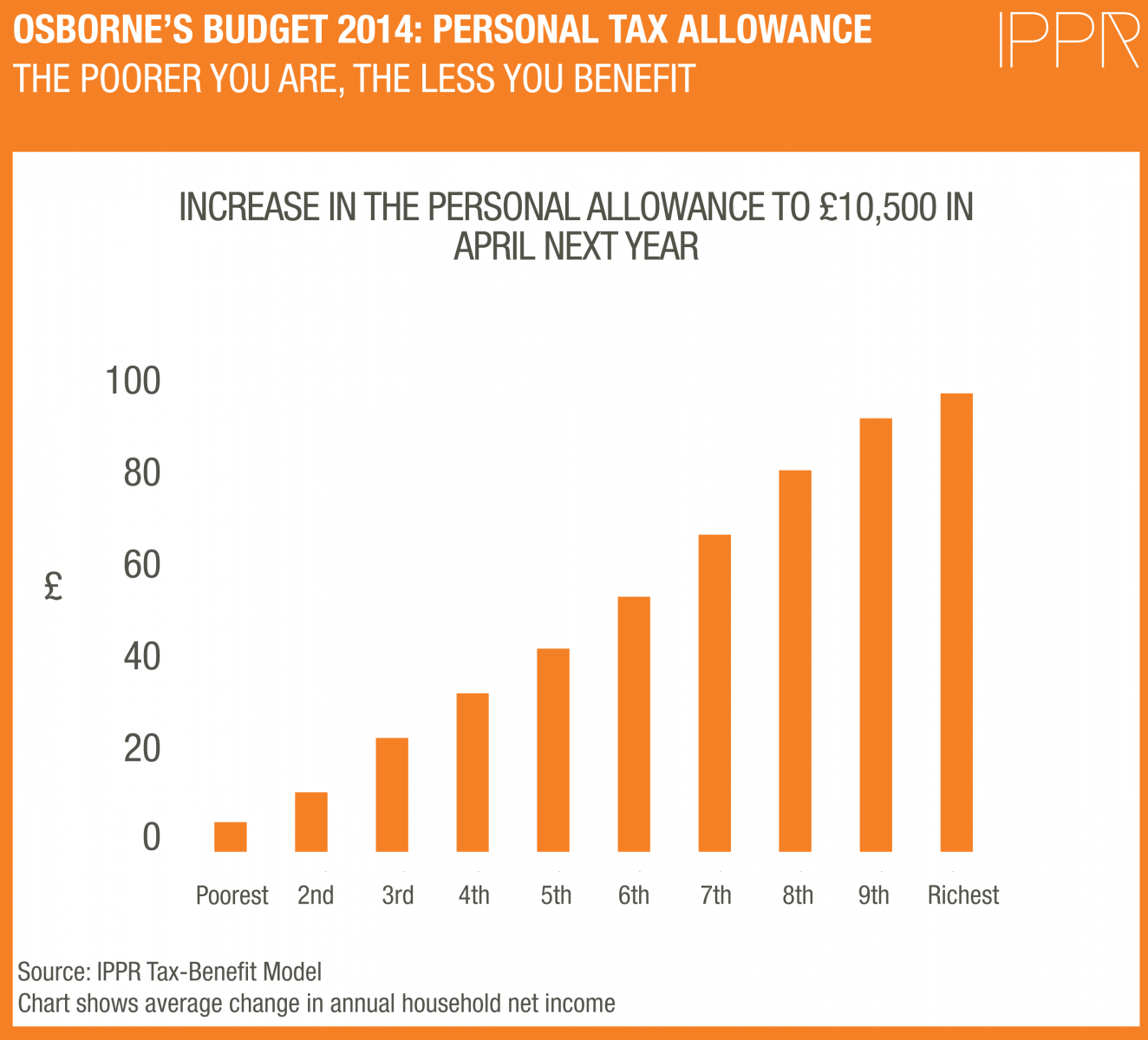 Finally, It is easy to see the attraction of wanting to take people out of tax. But we need to bear in mind that raising the personal allowance is very expensive. We estimated at the time of the budget that an increase in the PA of £500 would cost around £2.5bn. Clearly, raising it even further will keep adding to the bill. Do we really think giving more money to those on the highest incomes is the best use of scarce fiscal resources?

The plans by the Lib Dems to also increase the threshold at which workers pay National Insurance (NI), currently well below the PA, are far more sensible since they will help workers on lower incomes. But again they run into the question of cost. If the plan is to increase both the PA and the NI threshold to £12,500, we are likely talking about tens of billions of pounds of lost revenue. Therefore we really need to see detailed plans of how to pay for these giveaways before considering whether they should be adopted.

As a strategy for tackling low pay, raising the personal allowance ran out of usefulness several years ago. While it is probably right to start looking at the National Insurance threshold instead, if we really want to tackle the root causes of poverty, income inequality and low living standards, we need some new ideas.