The Chancellor certainly got out of the right side of the bed this morning. Walking into the chamber deliver the Spring Statement, Philip Hammond was all lighten and jokes, defiant to paint a positive picture of the country’s finances.

Hammond was keen to come across more Tigger than Eeyore, but Treasury watchdog the Office for Budget Responsibility quickly brought him back down to earth with a thud.

Despite weak growth, the Chancellor presented some upgraded forecasts to the economy, and promised that there was “light at the end of the tunnel” for the era of austerity.

But for Brexit, the tunnel appears to be very long indeed. A whopping 45 years long in fact: the OBR estimated that the UK would be still be handing over so-called divorce bill payments to the EU until 2064.

Why should CNN tweet about “individuals with a cervix“?

Rebecca Long-Bailey is fighting an opponent who doesn’t exist

While the main bulk of the bill will be paid much earlier, some expenditures will remain well into the latter part this century. Around half will be dedicated to meeting the rest of the UK’s outstanding payments, which will be paid over eight years. The rest “reflects pension liabilities” of EU officials, which accounts for why the UK will still be paying so many decades after the departure date. 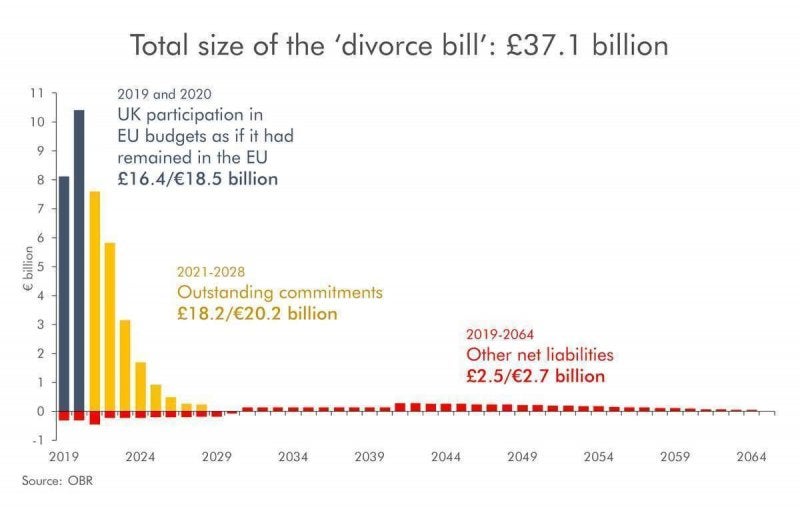 The OBR also predicted that the divorce bill would come in at £37.1bn, in line with the government’s figures of between £35-39bn. The Treasury watchdog carefully said there was now “sufficient clarity” to estimate the divorce bill, but that they continued to base forecasts on “broad-brush assumptions”.

In other areas, the Chancellor was slammed for his weak growth estimates. Institute for Fiscal Studies director Paul Johnson said that the forecasts – which would leave Britain near the bottom of the G7 growth league – were “dreadful”.

In a bit of true Tigger-like positivity, the Chancellor revised down the forecast deficit for this fiscal year by almost £5 billion. Deputy director of the IFS Carl Emmerson explained:

“This is good news and the deficit has been returned to pre-crisis levels. However the forecast for 2019–20 is for a £34 billion deficit, rather than the £10 billion surplus forecast just two years ago.”

Eliminating the deficit by the mid-2020s would involve even more, “difficult choices and missing it would certainly not be a surprise”.

So in a rather thin announcement, the lasting impression of this Spring Statement could end up being another Brexit headache. With nothing given out to the NHS, social care, or struggling councils, it wouldn’t be a surprise if the only thing that cuts through is the prospect of a never-ending Brexit.

Dulcie Lee is a journalist at BBC Panorama and BBC News.