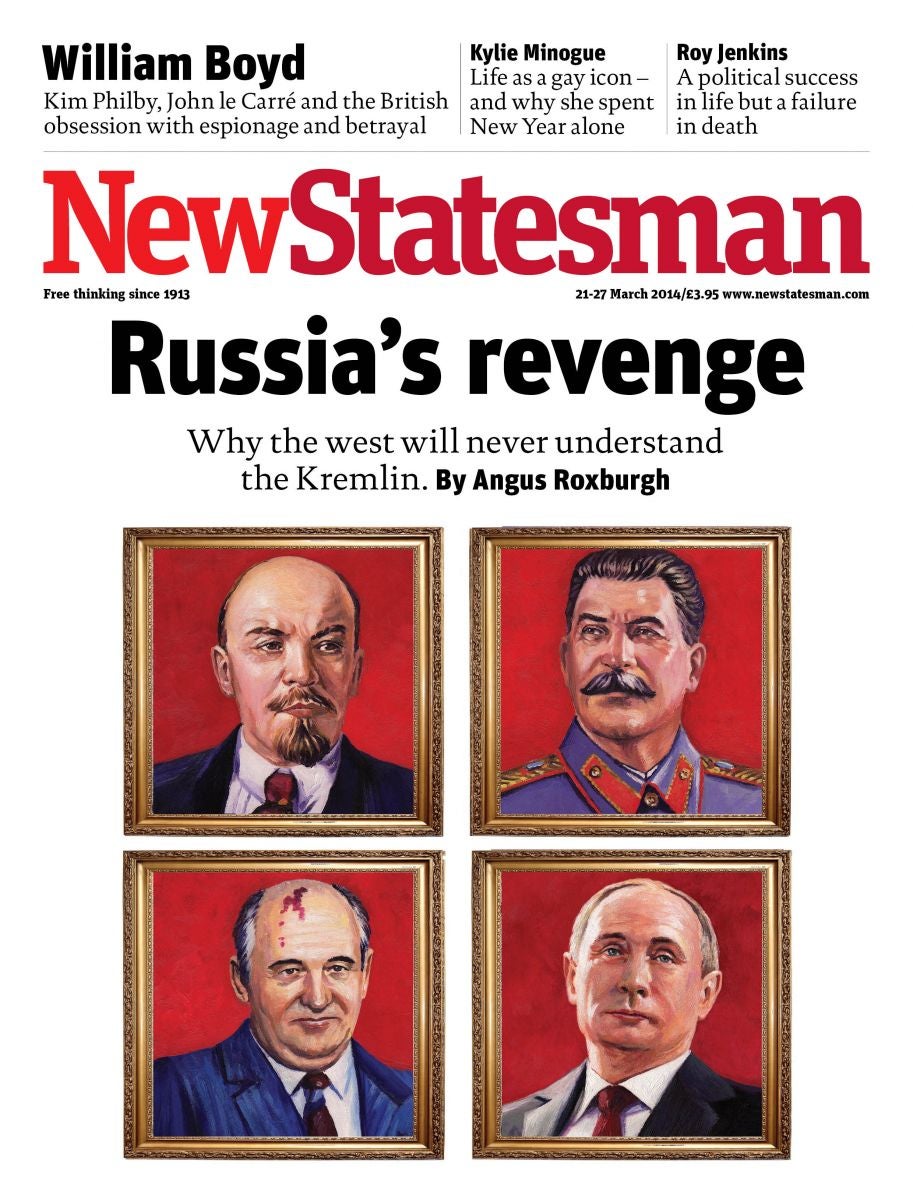 Angus Roxburgh: Crimea is Putin’s payback to the “gormless” and complacent west

Rafael Behr on Labour’s puzzling lead in the polls

David Marquand on the political legacy of Roy Jenkins

Kylie talks to Jude Rogers about mortality, sex and GBFs

Anthony Wedgwood Benn’s 1961 fight to stay in the Commons

In this week’s NS cover story, the former BBC Moscow correspondent Angus Roxburgh argues that recent events in Ukraine are Vladimir Putin’s payback for what he considers to be a quarter-century of humiliation since the collapse of the Soviet Union.

Even by the standards of Putin-era television (indeed, even by the standards of Soviet television) the propaganda is jaw-dropping. You have to slap yourself in the face to recall that just a month ago we were watching the opening ceremony of the Sochi winter Olympics – a magical evocation of everything that made Russia great: scientists and writers, composers and cosmonauts, poets and ballet dancers, philosophers and artists. This is the European, cultured Russia we aspire to be, they were saying. Even the Olympic ring that failed to open was somehow endearing, a reminder of what many westerners love about Russia – its maddening foibles, its pretensions to grandeur that often fall just a little short. The producers knew it and made fun of the lapse in the closing ceremony. You see: we Russians can laugh at ourselves. We are just like you.

And then, it turns out, they’re not.

Roxburgh warns that “a new cold war is starting” and blames the west’s “inept handling” of the collapse of communism for the present crisis:

By encircling Russia and undermining its security (which Nato expansion and the missile shield undoubtedly did), we created the enemy we didn’t want. Halfway through his second term, Putin decided that America did not want to share power in the world. And he was right – not with a man who was locking up his critics and rigging elections. Both sides were sliding into a spiral of mutual mistrust and hatred. For Putin, the battle for acceptance was lost and it was no longer worth “improving” himself to regain it. He became the menacing, vengeful warlord we now have to deal with. Gosh!

Our next generation of western Kremlinologists should bear this in mind: whoever is in the Kremlin – even the most likeable, “western” leader you can imagine – will have Russia’s interests at heart, not ours. They will want a say in the world commensurate with Russia’s size and nuclear status, they will care about Russians living abroad, and they will resist anything they see as a threat to their security.

When George Osborne’s plan for the economy was obviously failing, Conservative MPs had the consolation of understanding why they were losing to Ed Miliband. Now that the recovery is established, they find Labour’s lead in opinion polls mystifying. It is disorienting in a race to feel sure of having overtaken someone yet still see him out in front . . .

Cameron’s few cheerleaders insist the Tory vote share is a lagging indicator, tracking good economic news but with a delay. In support of this thesis they point to a small but discernible narrowing trend in the polls. Give it time, they say, and Miliband’s freakish endurance will end. Besides, the argument continues, voting intention is just one of three classic general election predictors and by no means the most reliable. On the others – who is trusted to run the economy; who makes the best leader – Cameron is ahead.

In his Lines of Dissent column, Mehdi Hasan exposes the double standards applied by western governments to the crises in Crimea, Syria and Egypt. He accuses the United States, in particular, of “brazen hypocrisy” in its foreign policy:

Speaking at the US embassy in Kyiv on 4 March, Secretary of State John Kerry told reporters “how incredibly moving” it had been to “pay my respects . . . at the site of last month’s deadly shootings”. He extended his condolences to people who “battled against snipers on rooftops”. What they stood for, Kerry continued, “will never be stolen by bullets . . . It’s universal, it’s unmistakable, and it’s called freedom.”

Unmistakable? Universal? Nice try, John. On 14 August 2013, at the Rabaa al-Adawiya square in Cairo, Egyptian security forces attacked a sit-in by Muslim Brotherhood members which had begun in July after the overthrow of President Mohammed Morsi, a member of the Brotherhood. As in Kyiv,
snipers on rooftops fired on the crowds below. More than 900 protesters were killed that day, in what Human Rights Watch called the “most serious incident of mass unlawful killings in modern Egyptian history”.

And Kerry’s response? He went through the motions of a condemnation, describing the violence as “deplorable”. Yet just three months later, on a visit to Cairo, he restated his view that the generals in Egypt were intent on “restoring democracy” and were “working very, very hard” to do so. There was no rousing rhetorical tribute to the brave Egyptians who had battled against snipers; no trip to Rabaa al-Adawiya to pay respects to the dead. The message was clear: our concern for the dead is shamelessly selective. So, too, is our outrage.

From the Archive: Anthony Wedgwood Benn

The NS remembers the late Tony Benn with an article he wrote for the 31 March 1961 issue entitled “A fight for common sense”, in which he argued that his father’s peerage should not exclude him from the House of Commons. Benn won the Bristol by-election the following May, but was disqualified. His Conservative rival, Malcolm St Clair, took the seat but resigned it in 1963 after the passage of the Peerage Act allowed Benn to return to the Commons:

The present law has never been embodied in statute. It has developed with uncertain authority from the customs and practices of past centuries. A peer by descent need never claim his peerage, nor go near the House of Lords. But, from the moment he inherits it, he is debarred for life from service in the Commons and can neither renounce nor surrender his title. There is therefore a direct conflict between common sense and the Common Law.


My personal battle against this nonsense is not, of course, by choice, but is dictated by necessity. From the moment of my election for Bristol in 1950, I knew that Father’s death would simultaneously remove us both from parliament. People sometimes ask why a transfer from the Commons to the Lords should be so intolerable. Both are Houses of Parliament so why the fuss? But what self-respecting paratrooper would agree to be seconded to the Beefeaters?

The Critics Interview: Kylie talks to Jude Rogers about mortality, sex and GBFs

Kylie on sexuality and feminism:

What is Kylie Minogue’s feminism? “It’s a tricky one,” she begins, but then implies straight away that it shouldn’t be. “I mean, women should have equal rights in everything – of course they should – but the rest is a minefield. I think it’s important to try and celebrate my femininity, but that’s not for everybody.”

On her GBFs and being a gay icon:

Minogue’s sexuality is often presented in layers of camp; it has a context in reality rather than a sense of distant, dead-eyed objectification. But her move towards becoming a gay icon has had an odd consequence – the primary fan base for this beautiful, sexy woman is one that doesn’t want to have sex with her.

What’s that like? She thinks for a while, and smiles. “Well . . . I see what you’re saying. But I guess it’s just been that way for such a long time . . . I don’t know.” She tails off. “I still flirt with those people. I have a ridiculous amount of GBFs [gay best friends]. But, yeah, I guess it’s everything in life but with the sex removed.” She gazes into the distance; it’s a question that she might come back to later, for herself.

I wonder out loud about the psychological effects of the cancer. “It was like living on another plane for a while,” she says eventually. “I mean, part of your brain’s functioning like normal and the other part is just so shocked and terrified it can’t compute. Also, I’ve always been compassionate, but to have compassion and a first-hand experience of something like that . . . it makes you a very different person.” She nods, lips tight. “I just wish you could jump-cut to that without the experience.”

On her Welsh roots:

Minogue may feel an affiliation to Britain because half of her family is Welsh. Her mother, Carol Ann Jones, born in Maesteg, South Wales, became a Ten Pound “plastic Pom” when her family emigrated in the Fifties. Minogue’s grandmother Millie, known in the correct Welsh terminology as Nain, is still flourishing in Melbourne at the age of 94, and her granddaughter still has a drink with relatives whenever she plays over the Severn. “I really do! It’s one of my great regrets that I can’t do a Welsh accent.” She tries and fails, valiantly, to say “thank you” in Welsh. “Or, er, Llanfairpwll . . . argh . . . five-days-later-go-go-goch.” She rolls her eyes. “Oh dear.”

For this week’s issue, the horticulturalist Stefan Buczacki recalls being cornered by the Two Fat Ladies and buttonholed on the subject of carrots v cardoons:

I have a particularly fond memory of Clarissa Dickson Wright, who died on 15 March. I was at one of those peculiar gatherings that constituted a BBC programme launch party when I was spotted across a crowded room by Clarissa and Jennifer Paterson, who were there to celebrate what was, I think, the last series of Two Fat Ladies. They bore down on me from two sides until I was pinned against a wall (and I do mean pinned; the ladies were not called fat for nothing) and Clarissa, who was well known for loathing carrots, demanded in a stentorian voice: “Now what do you think of cardoons?” I said they were constantly on my mind.

It wasn’t the sort of thing you forget in a hurry, not least because I am especially fond of cardoons and think them among the lost treasures of the English kitchen. They are relatives of the globe artichoke but you eat the leaf stalk not the flower. The only problem is that, like the wonderful Clarissa and Jennifer, they do take up a lot of room.

Buczacki also ponders the significance of the tree species planted by a succession of serving prime ministers in the garden at Chequers:

Margaret Thatcher planted a lime, Tony Blair a field maple, Ramsay MacDonald a cedar and Neville Chamberlain a tulip tree. No, I couldn’t see the connection, either. John Major planted a native oak, although I’m unsure which species. No matter, it is the embodiment of our national strength, something you might have expected of Churchill. In fact, Churchill did plant an oak, but not an English oak. For some bizarre reason and presumably at the suggestion of some civil servant whose knowledge of biogeography was no more sensitive than his knowledge of history, I discovered that in 1955 he planted on the east lawn a specimen of Quercus ithaburensis macrolepis, the valonia oak. And where does the valonia originate? It just happens to be one of the most characteristic forest trees of Gallipoli and the area around the Dardanelles. Someone has much to answer for.