This week, traders from a migrant hub in north London have been fighting the demolition of their market in court.

The Seven Sisters Indoor Market, known as the Latin Village for its number of Latin American stalls and businesses, is about to be demolished to make way for flats.

In plans underway since 2005, Grainger, a property developer, aims to build 196 new flats – none of which will be affordable (below market rate) or social housing – and a new retail space, with only six units allocated to independent stores.

As part of a project to regenerate Tottenham, Haringey Council gave the go-ahead to redevelop this site, known as Wards Corner – named after the defunct Edwardian department store building that has housed migrant stallholders since it closed in 1972.

How politicians failed to protect the public from crypto

The traders will be moved to a temporary market across the road during construction, and then moved into a new market on the site if they choose (a concession tacked onto the plans in 2008 at the request of then London Mayor Boris Johnson).

Afraid of rising rents, losing their livelihoods and the destruction of their community, traders fought the Compulsory Purchase Order (CPO) – requested by the council and granted by the government for the property developer to buy up the remaining land – in the High Court this week.

They were unsuccessful, and plan to appeal the decision and to demonstrate at the site on 26 October.

The tricky thing here politically is that the council is an early example of a Corbynite administration. Known as “the first Corbyn Council”, representatives of the Jeremy Corbyn-supporting network Momentum deselected and replaced the old guard last year.

Council leader Joseph Ejiofor and the former deputy leader and current cabinet member for housing, Emine Ibrahim, are two of four public office holders on Momentum’s National Coordinating Group, its “highest body”, responsible for “ensuring that the organisation operates in line with its aims and values”.

Ejiofor and his team were voted in on a manifesto pledging to “do housing differently” – reflecting Corbyn’s national policy to put tenants and residents first.

Of course, the Wards Corner development was agreed and initiated by a previous administration. The council leadership’s argument is that it could be costly to unilaterally exit such an agreement. They have calculated the cost of scrapping the scheme, but the figure has not been made public.

When they were elected, however, they fought to cancel another inherited controversial housing plan called the Haringey Development Vehicle (HDV), settling out-of-court with the developer.

So why can’t they do that this time?

One argument from the left is that they can’t afford to keep losing money like this when services are already stretched after nearly a decade of austerity.

Another is that the agreement goes back a lot longer than the HDV, which was only decided in 2017. (As one source on the council put it to me, the HDV is a “second-date snog” to the Wards Corner development’s “ten-year marriage”.)

While arguing that the council couldn’t afford to get sued, its leader Ejiofor defended the plan itself when I spoke to him earlier this year. “We’re treating this as a renewal. Nothing stays the same forever,” he told me, claiming “nothing will change” for the traders.

Could the council get out of it if it wanted to, though?

One way that it could be able to is if the developer, Grainger, had breached its Section 106 agreements – planning obligations under the Town and Country Planning Act that lessen the negative impact of a development and make it acceptable in planning terms.

In Grainger’s case, these include things like the ongoing support of the traders and their businesses in the current market, aiding them in their relocation to the temporary market, a community engagement strategy and diversity monitoring to mitigate negative impacts on equality, among other obligations.

If it doesn’t comply with these, “it is enforceable against the person that entered into the obligation and any subsequent owner”, in the words of the Local Government Association. “In case of a breach of the obligation the authority can take direct action and recover expenses.”

A document leaked to the New Statesman reveals that some Haringey councillors appear to suspect the property developer has breached its Section 106 agreements, which could hand the council a painless route out of the deal. Grainger strongly rejects rumours and allegations of such a breach.

The unpublished draft of a report by a panel of back-bench councillors from the ruling Labour group and opposition Lib Dems seen by the New Statesman urges the council’s leadership to investigate “whether there was a breach of the section 106 agreement”: 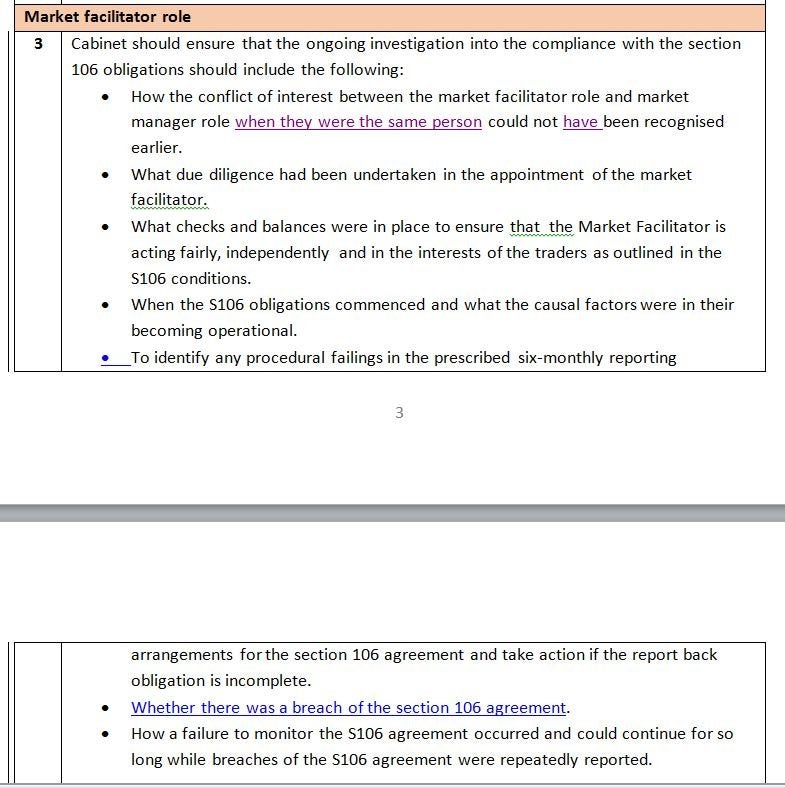 The document, an early draft of a scrutiny review report, also includes a whole section, since deleted, calling for the council to “acknowledge that there has been a breach of the S106 conditions in the Grainger case and ensure that the developer honours its obligations in a meaningful way that complies with all the legal requirements”:

In a section entitled “Consequences of Withdrawing from the Development Agreement”, one of the panel’s recommendations is for the council to consider “whether alleged breaches of the S106 provides grounds for termination without penalty”, as a “potential exit route” from the agreement:

Yet there is no mention of this concern in the public copy of the report, which was published on 7 October 2019. This copy has yet to be approved, and third parties (including the property developer) will have the opportunity to comment on its contents before it is finalised.

The public report is damning in itself – highlighting evidence of poor treatment of traders, accusing the council of providing inaccurate legal advice about the developer’s obligations to the traders, and referring to the “ongoing poor maintenance” of the market. It recommends that the council explores “the feasibility and cost benefits of all approaches for a full or partial buy-out of interests at the Seven Sisters market and whole site”.

Yet it omits the suggestion of a potentially uncostly way out of the agreement outlined in the earlier draft. A spokesperson for Haringey Council reveals that they are looking into claims of a breach: “We take the discharge of our statutory functions very seriously and are actively looking into what has happened in this particular case. It would not be appropriate for us to comment before we have concluded that work.”

“The question really is: does one of the first Corbyn councils in the country want to be responsible for dispossessing a migrant, working-class community?” asks Ben Beach, an architect who supports the traders and has helped design and submit an alternative community plan for the site.

“That’s the choice they’re ultimately going to have to face. People’s livelihoods are going to be destroyed – and from the supposedly left council leadership, there’s been basically no action.”

Regarding the public report, a spokesperson for Grainger says:

“We are in the process of legally challenging this draft report due to the many inaccuracies within it which continue to spread misinformation about Grainger’s work in Seven Sisters. It is important to recognise that, while the draft report insinuates many things, it offers no evidence of us having breached our s106 obligations.

“Grainger is committed to Seven Sisters and we continue to comply with our s106 commitments, many of which were agreed in partnership with the traders and the local community. We look forward to this draft report being corrected in full.”