“No-deal” Brexit has become a live issue this summer, with extensive discussion of whether it might happen and what the consequences would be if it did. One major missing voice in this discussion, however, has been the British public. Do they think “no-deal” Brexit is likely? What disruptions are they braced for if it comes to pass – and which would come as a surprise?

To answer some of these questions, we commissioned YouGov to poll a representative sample of British voters on the overall likelihood of “no deal”, and on the potential for various forms of disruption if it came to pass.

The public recognise the risk of a no-deal is substantial. While few rate it as certain, a majority of people see it as more likely than not. This majority is remarkably consistent across both partisan and referendum voting divides. The past few months of heated debate over no deal risks and preparations have cut through to voters, most of whom will not be surprised if a “chaotic Brexit” comes to pass next spring.

The Brexit negotiation is unusual, in that things will change regardless of whether a deal is struck. The public are well aware of this: less than one in 20 thinks no deal will mean Britain continues as an EU membership, and just eight per cent think “nothing really important would change” in a no deal Brexit. The public are braced for change and disruption. However, they aren’t sure what to expect.

The politics of lies: Boris Johnson and the erosion of the rule of law

The uncertainty begins with the meaning of no-deal itself. The most popular understanding is that both sides pack up and walk away from the table. A plurality of 44 per cent think a no-deal will mean an end to Brexit negotiations, despite the numerous and substantial issues that would be left unresolved. A substantial minority believe negotiations would continue, but with Britain now outside the EU. Another quarter admit they have no idea what Britain’s relationship with the EU will be if no deal comes to pass. 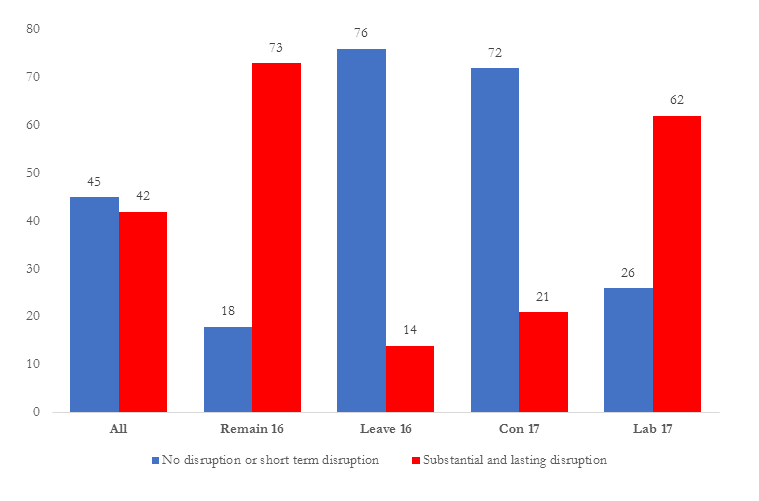 The public recognise a no-deal would bring costs, but Remain and Leave voters are divided over how extensive these would be. Roughly three quarters of Leave voters think the disruptions of no deal will be quickly resolved with no lasting effects, including a substantial minority who think there would be no costs at all. An equally large majority of Remain voters (73 per cent) think a chaotic Brexit will do substantial and lasting damage to Britain. Brexiteers see no deal as akin to tearing off a plaster; Remainers see it as more like losing a limb.

The mix of consensus and division we find in general questions about “no deal” extends to the more specific consequences we asked about. We asked voters to rate the likelihood of ten specific effects of a “no deal” outcome, focusing on major forms of disruption which have been discussed as plausible impacts of “no deal”. On the chart below we show the overall share (black dots) and the share of Remain (blue dots) and Leave (red dots) voters who rate each impact as “very” or “fairly” likely. 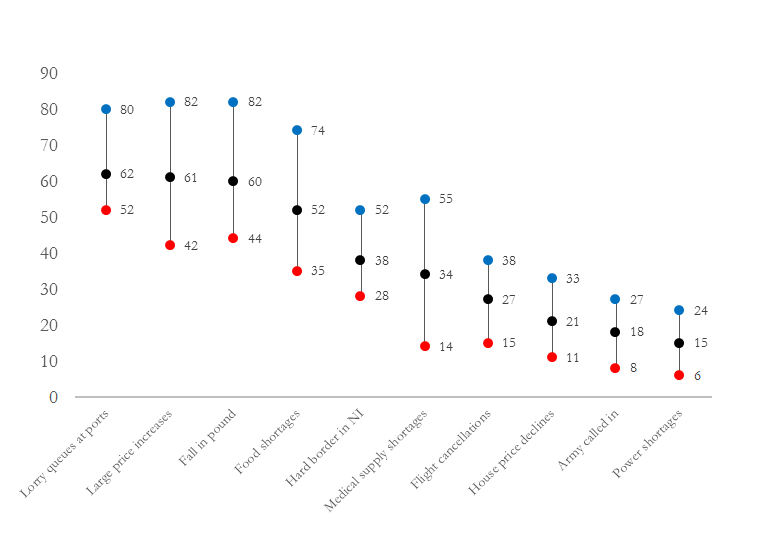 A large referendum divide runs right across the range of effects – “Remain” voters see every form of disruption as more likely to occur than “Leave” voters, and by large margins – the difference ranges from 18 percentage points to 40 percentage points. The general optimism of Brexiteers, and pessimism of Remainers, extends to every specific aspect of “no-deal” disruption.

Some of the impacts from “no-deal” are, however, recognised as more plausible by Brexiteers and Remainers alike. Majorities of the public overall expect to see queues of lorries at Dover and other ports, a big fall in the value of sterling and large increases in the prices of goods and groceries next year if Britain leaves the EU without a deal. This includes lopsided majorities of Remain voters but also many Leavers. Over half of Leave voters are braced for lorry queues, while 40 per cent plus anticipate a sterling slide and price increases.

Two other impacts of no-deal are seen as credible by a majority of Remain voters, but few Leave voters: the return of visible border posts in Northern Ireland and shortages of critical medical supplies. The Irish border and medical regulation and supply chains are both complex and technical issues, and importantly ones where voters have received very mixed signals from the government and the media. The divisions here may reflect voters selectively listening to authorities who share their views – so Remainers listen to anxious pharmacists and Irish politicians, while Brexiteers tune in to reassuring messages from the government and the Eurosceptic media.

The final group of impacts, on the right of the chart, are ones which Remainers and Leavers alike see as unlikely. Only minorities of respondents see power shortages, house price declines, widespread flight cancellations as likely outcomes of a “no-deal” Brexit, and the idea of the army being called in to deal with disruptions is also dismissed as implausible by most.

These more detailed impact assessments suggest that while most voters are braced for a chaotic no-deal Brexit, some of the no-deal effects which most concern experts retain the capacity to surprise the electorate. As explained in detail in the new UK in a Changing Europe report examining the possible effects of a “no-deal” Brexit, policy experts consider the return of border infrastructure in Northern Ireland and substantial disruption to flights to be likely impacts from a “no-deal” outcome, at least in the short term. Medical supply shortages are quite possible too, and power shortages have been flagged up by experts on European power infrastructure. These are perhaps the areas where “no-deal” is most likely to spring a surprise – outcomes that those who know the hard detail see as likely but where currently the public is unconcerned.

What is less clear, though, is how the public will react to “no-deal” disruptions. Even those which are seen as likely could draw an angry response. The contemporary British commuter has very low expectations from the rail network, but that does little to mitigate her anger at yet another cancelled train. Similarly, the expectation of traffic jams and price increases may do little to mitigate public anger if they arrive.

But at least expected outcomes can be prepared for. Issues such as flight cancellations and medical shortages may produce an even larger reaction, as if people do not see such outcomes as plausible they will not take any action to mitigate the disruption they cause – which will most likely magnify both the disruption and its political effects.

A “no-deal” Brexit will disrupt Britain’s politics as well as its supply chains and regulatory regimes. Could it have the potential to change the balance of opinion about Brexit itself? That is hard to say. However, political research suggests voters do not look kindly on governments who preside over major negative shocks and nasty surprises, and our new polling suggests potential for plenty of these if “no-deal” Brexit becomes a reality.