In October 2016 the UK government ran a national pandemic flu exercise, codenamed Exercise Cygnus. The report of its findings was not made publicly available, but the then chief medical officer Sally Davies commented on what she had learnt from it in December 2016.

“We’ve just had in the UK a three-day exercise on flu, on a pandemic that killed a lot of people,” she told the World Innovation Summit for Health at the time. “It became clear that we could not cope with the excess bodies,” Davies said. One conclusion was that Britain, as Davies put it, faced the threat of “inadequate ventilation” in a future pandemic. She was referring to the need for ventilation machines, which keep oxygen pumping in patients critically ill with a respiratory disease such as coronavirus.

Despite the severe failings exposed by Exercise Cygnus, the government’s planning for a future pandemic did not change after December 2016 – at least not formally. The government’s roadmap for how to respond to a coronavirus-like pandemic has long been available online, and the three key documents – the 70-page “Influenza Pandemic Preparedness Strategy”, 78-page “Health and Social Care Influenza Pandemic Preparedness and Response” and 88-page “Pandemic Influenza Response Plan” – were published in 2011, 2012 and 2014 respectively. These plans were tested and failed, yet these documents were not rewritten or revised.

They share a glaring shortcoming: not one of them mentions ventilators, which are now in such high demand that Matthew Hancock, the Health Secretary, told British manufacturers on 14 March, “If you produce a ventilator, we will buy it. No number [you produce] is too high.” He urged firms from Rolls-Royce to JCB to stop what they do and to begin making ventilators.

The government does not have a stockpile of ventilators, as the documents made clear and Hancock has confirmed. All three of the plans refer to stockpiles, but only of antivirals, antibiotics and personal protective equipment for NHS staff. Aside from face masks, the only mention of equipment in Public Health England’s Pandemic Response Plan is to do with IT staff being trained to use smart boards. Medical devices are not mentioned in any of the documents.

Hancock’s entreaty to manufacturers was the first time the government has publicly recognised Britain’s urgent need for more ventilators – six weeks after the first cases of coronavirus were reported in the UK on 31 January. But the necessity for the devices in any pandemic has long been clear. As the 2011 preparedness strategy puts it, “Critical care services… are likely to see increases in demand during even a mild influenza pandemic. In a moderate or severe influenza pandemic demand may outstrip supply, even when capacity is maximised… it may become necessary to make decisions concerning priority of access to some services.”

“Plans to increase capacity of these [critical care] services are an important aspect of planning,” the document continues, but these putative plans are strikingly absent from the government’s otherwise extensive documents. And Downing Street officials have, according to the Sunday Times on 15 March, found such planning to be non-existent. Pre-existing pandemic plans, an official is quoted as saying, “never went into the operational detail”.

Britain now faces a grave shortage of the machines that will keep critical patients alive. By combining government statements with publicly available documents, that shortage can be estimated. The government expects between 60 and 80 per cent of the population to contract coronavirus, or between 40 and 53 million people. Assumptions laid out in 2018 by the Scientific Pandemic Influenza Group on Modelling, or SPI-M – a working group of 10 academic teams – predict that 4 per cent of cases will require hospitalisation; this is in line with estimates for Covid-19, the disease that is caused by the virus Sars-Cov-2, both commonly referred to as coronavirus.

SPI-M’s modelling also assumes that a quarter of those hospitalised will need a ventilator; this, too, aligns with the World Health Organisation’s findings on coronavirus in China, and may even be an under-estimate. In short, at least 1 per cent of all cases can be expected to need ventilation, or between 400,000 and 530,000 people. Modelling released on March 16 by a team at Imperial College, which has informed government planning, suggests a 1.3 per cent rate. That rate has risen after new data from Italy.

The government has said that it expects 95 per cent of all cases to occur over a nine-week period, with 50 per cent coming during a three-week peak. This reflects modelling by SPI-M in 2018, available online, and the course of the 1957 influenza pandemic in the UK. This means that during the peak, which is expected to arrive in Britain in late May or June, 15 to 20 per cent of all coronavirus cases will hit the NHS every week for three weeks. Assuming only a 1 per cent rate, rather than the higher rate in Imperial’s latest modelling, the number of patients needing a ventilator would therefore range from 60,000 per week to more than 100,000.

The United Kingdom has 5,000 ventilators. Many are sure to already be in use, as ventilators are deployed with intensive care beds, and Britain’s intensive care beds run at 70 to 80 per cent capacity most months. Each ventilator will typically be required for at least ten days, making the gap between demand and supply more acute over time. 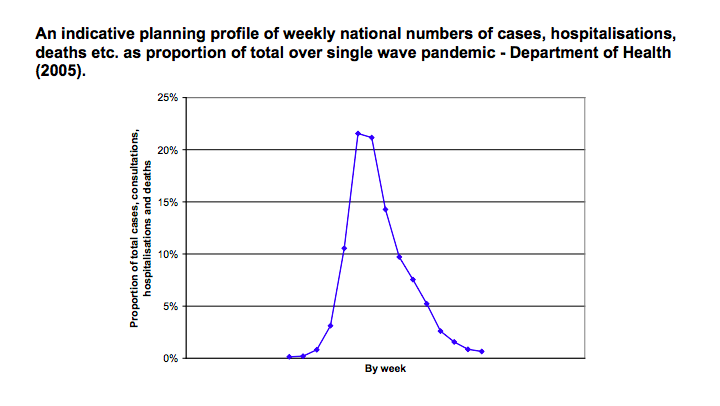 On 25 February, Bruce Aylward – the epidemiologist who led the recent WHO mission to China – returned from Wuhan, where the crisis began, and gave a warning to the world. China, Aylward explained, had done something extraordinary. It had managed to wrest control of an exponentially expanding epidemic. “When you spend 20, 30 years in this business,” Aylward said, holding up a graph that showed the improbable slowdown in cases across China, “it’s, like, ‘Seriously, you’re going to try and change that [curve] with those tactics?’”

The UK has not attempted to emulate China’s response, or those of other countries such as Singapore, Hong Kong and Taiwan that have successfully curbed, or held back, Covid-19. But the government’s high-risk strategy is informed by a belief that coronavirus cannot be stopped and that the success of others in checking it is only temporary – because the virus will return once people resume normal life. The government’s strategy is led by Christopher Whitty, the chief medical officer for England. Professor Whitty is an epidemiologist and is recognised as brilliant in his field. “He is a very thoughtful and careful man,” Deirdre Hollingsworth, a leading epidemiologist at Oxford University, told me.

Whitty is not only respected but has long prepared for a pandemic. As the professor of physic at Gresham College – a position which dates back to the 16th century and reflects his standing – his 2018 lecture series was on how to control one.

He now has a real-life pandemic to control, and his bold strategy is increasingly being doubted. He recently told a parliamentary select committee that the NHS will “flex” and cope in the face of coronavirus. But with a bewildering absence of ventilators, inexplicably unmentioned in official plans and already in short supply, it is not clear how.

Note: This piece was updated on March 17 to include Imperial College’s modelling. The follow-up to this piece (“Why weren’t we ready?”) is available here.