Boris Johnson is Prime Minister, and has announced his new cabinet. In one move, the Conservative government has lurched from the One Nation centre towards the extremes of the ERG and the “New New Right”. It is staffed by people who share two convictions: the absolute necessity of Brexit, and the absolute necessity of Boris Johnson. It is also a wartime cabinet, running a government on an election footing.

Johnson’s strategy is clear. His government will leave absolutely no room for doubt about its impeccable Brexiteer credentials. This is not just meant to make whatever Brexit emerges by October, deal or no deal, palatable to Leave voters – a move straight out of the “it takes Nixon to go to China” school of politics. It is also designed to starve the Brexit Party and what remains of Ukip of any room for manoeuvre. The goal is seemingly no longer a Conservative-Brexit Party pact, which Nigel Farage has pleaded for, but total Tory domination of the pro-Brexit right of the political spectrum.

How viable is this strategy? One thing to note is that little has actually changed in the Remain/Leave balance among the wider population. In the European elections, the Leave bloc (Conservatives, Brexit Party, Ukip) secured 42.7 per cent overall. The Remain bloc (Liberal Democrats, Greens, SNP, Plaid Cymru, Change UK) received 40.2 per cent. Excluding chronically undecided Labour’s 13.7 per cent, that is very nearly a 52/48 per cent split of the electorate.

The same is true of right- and left-wing voter groups. At the 2017 general election, the right bloc (Conservatives, Ukip) scored 44.2 per cent overall. In the last three weeks of polls, its equivalent (Conservatives, Brexit Party) has been getting 43.9 per cent on average. The rival centre-left bloc (Labour, Liberal Democrats, Greens, SNP, Plaid Cymru) managed 52.5 per cent in 2017; recently, the same combination has been scoring an average of 54.1 per cent. The blocs overall have barely shifted. What has changed is their internal composition. Voters on the right have shifted towards the extremes, and those on the left towards the centre.

This gives us two criteria to assess Conservative and Labour strategy for the next election: the “vote splits” of which parties Remainers/Leavers intend to vote for, and “vote switching” from the last election. I drilled down into the data beneath the headline polling numbers, and the situation is one of clear fragmentation. A third of Remainers each intend to vote for Labour and the Liberal Democrats, with the rest largely going to Conservatives and Greens. A third of Leavers each go to the Conservatives and the Brexit Party, and the rest mostly to Labour. 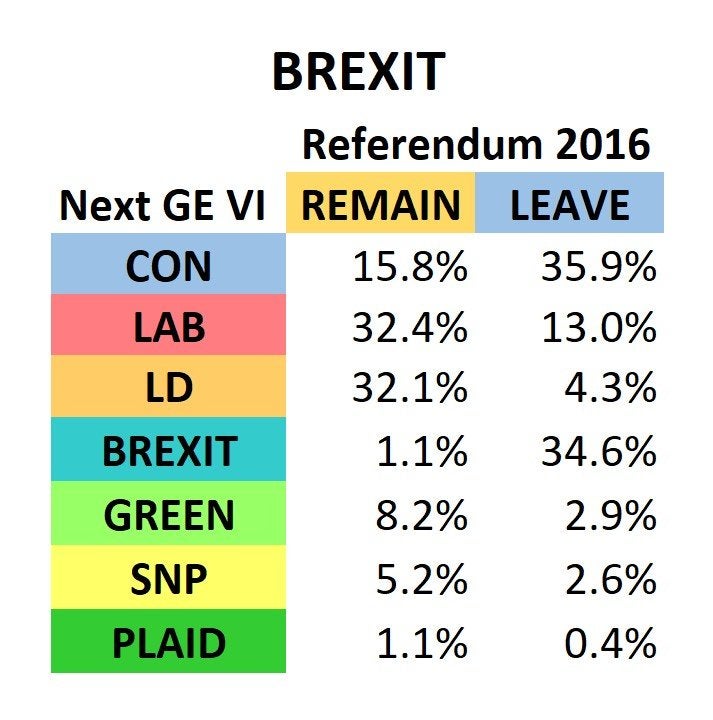 Looking at the equivalent data for vote switching, both Conservatives and Labour are retaining just over half their 2017 votes. With the Conservatives, most of the rest goes to the Brexit Party, and some to the Liberal Democrats. For Labour, the remainder is more evenly split, with half going to the Liberal Democrats, and around a quarter each to the Greens and the Brexit Party.

How might this play out at an election? As an illustrative exercise, I modelled this by applying the latest “vote split” and “vote switching” figures to constituency-level data for the last election and estimations for the referendum.

As things stand, if the next election were determined purely based on Brexit, it would be an overwhelming Conservative landslide, with close second places for Labour, Liberal Democrats, and the Brexit Party in many seats. If it were just down to party loyalties, it would produce a hung parliament just as tenuous than the current one, with the Conservatives 22 seats short of a majority.

What happens if Remainers/Leavers and other parties’ voters shift back to the two main parties? About 51 per cent of referendum voters and 43 per cent of 2017 Conservative/Labour voters are still to play for. The data also suggests which parties each main party must target: Brexit Party for the Conservatives, Liberal Democrats and Greens for Labour.

To show what is at stake, I modelled what would happen in four further scenarios:

Obviously, these are only indicative results. But they show how finely balanced the outcome of the next election might be. As the contours of Johnson’s new government take shape, the Conservatives are clearly making a strong play for pro-Brexit voters. They are doing so as much to shore up their own vulnerability as to encroach further on Brexit Party vote share. If the very latest polls are anything to go by, their strategy is already proving successful.

So far, Labour has yet to seriously follow suit. The party is in an incredibly precarious position, as it faces an uphill struggle to convert additional Remain/centre-left votes into a Commons majority. Without an immediate and serious change of position on Brexit, and an open appeal to other voters on the left, Labour is in danger of throwing away the next election.