Jeremy Corbyn is facing increasing pressure to shift Labour’s stance on Brexit. But to too many Remain advocates, there seems to be an assumption that an embrace of their preference will automatically result in a revival of Labour fortunes.

Questioning this assumption, I sought to find out how this might actually play out in practice – caveats about polling hypotheticals notwithstanding.

Q: What happens if Corbyn holds to his current position of delivering an alternative Brexit?

A: Quite possibly, a Liberal Democrat victory. 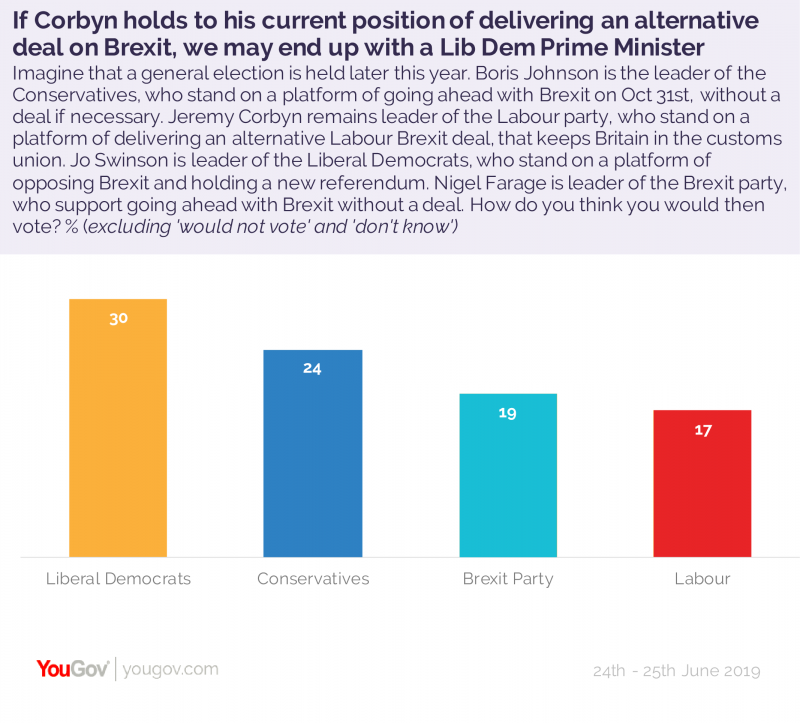 In this scenario, Labour retains 38 per cent of its 2017 voters, with slightly more moving to the Lib Dems (39 per cent). In essence, sticking to its current position results in Labour losing half (51 per cent) of its post-2017 defectors to the Lib Dems.

As for Labour Leavers, roughly one in five of those who voted Labour in 2017 but would not vote for them in a general election tomorrow, ie lost Labour voters, would move to the Conservatives or the Brexit Party instead. It should be noted that under all scenarios this pro-Brexit Labour defectors group remains roughly the same.

Q: What happens if Corbyn switches Labour’s position to outright opposition to Brexit and support for a new referendum?

A: Quite possibly a Conservative victory. 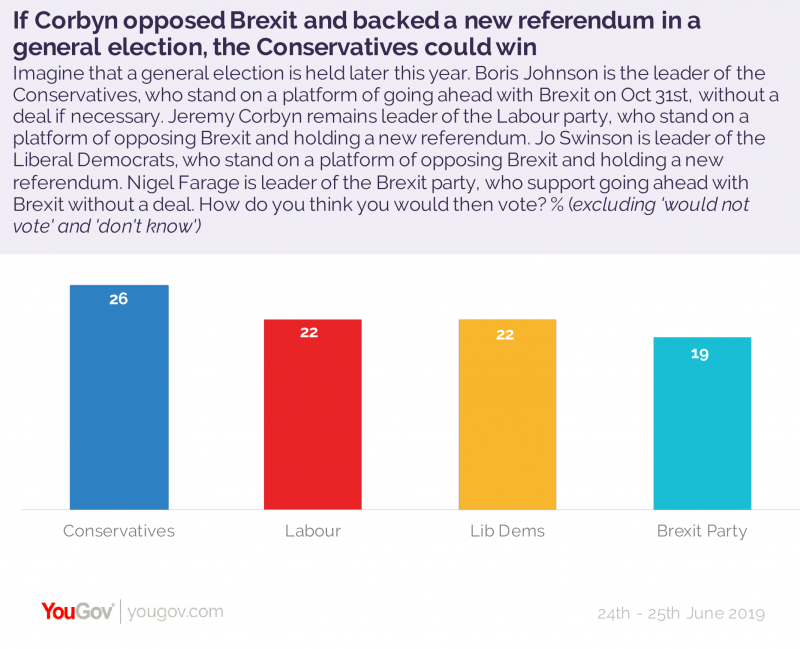 The Lib Dems’ fall and Labour’s rise could be driven by a split in the Remain vote. In this scenario, the proportion of Remainers who said they would vote Lib Dem falls to 40 per cent, while the proportion who would vote Labour rises to 33 per cent.

But whilst Labour retains 50 per cent of its 2017 voters in this scenario, one in four would still move to the Lib Dems (25 per cent).

Among the lost Labour voters, most would not move back to Labour even if Corbyn opposed Brexit: 41 per cent would still move to the Lib Dems. However, one in five (19 per cent) would return to Labour in this scenario.

As we can see, it’s not as easy as Remainers might hope to say that a shift to Brexit opposition automatically leads to Labour’s post-2017 defectors returning to the party. Indeed, such a shift could lead to the Remain vote being split equally between Labour and the Liberal Democrats with the result that the Conservatives would enjoy their strongest showing.

Q: What would it take for Labour to win a general election?

A: Possibly, a more enthusiastically Remain leader, such as Sir Keir Starmer, opposing Brexit and support for a second referendum. 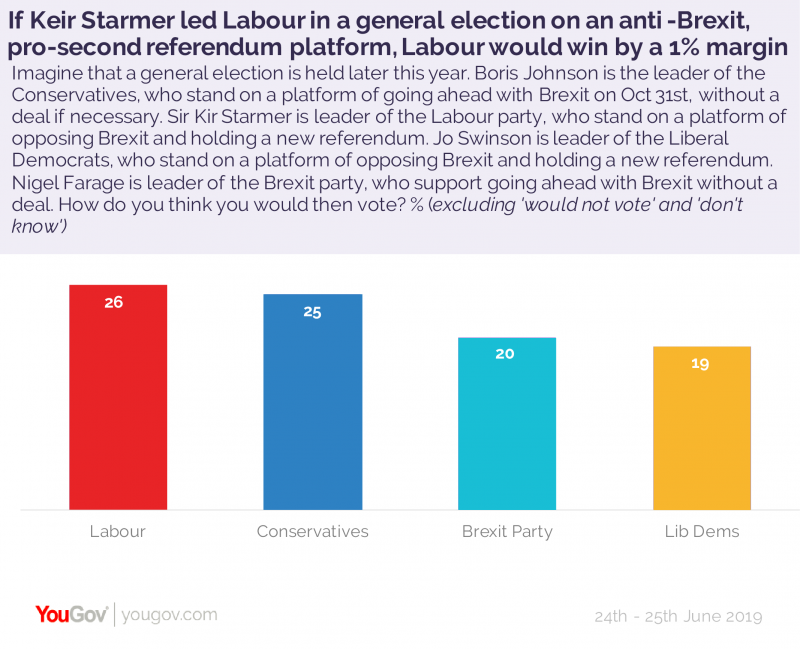 First, let’s note that this is a win only by the narrowest of margins – just 1 per cent.

Where under Corbyn, Remain voters were still more likely to vote Lib Dem even if Labour stood against Brexit and for a new referendum, under Starmer, Remainers are more likely to say they would vote Labour than Lib Dem (42 per cent Labour, 33 per cent Lib Dem).

What’s more, this is the only scenario in which a plurality of lost Labour voters would return to the party. 35 per cent would do so. 31 per cent would still vote for the Lib Dems instead.

Q: Why would Labour under Corbyn not see a significant polling boost should the party shift to a clear anti-Brexit, pro-second referendum position?

A: Quite possibly because trust matters as much or even more than political position and Corbyn has the highest “would not trust on Brexit” number of all the politicians we tested.

Between Boris Johnson, Theresa May, Jeremy Corbyn, Keir Starmer, Jo Swinson, Tom Watson, Nigel Farage and Jeremy Hunt, Corbyn is the least trusted to do what he says on Brexit by the general public as a whole (73 per cent do not trust, 17 per cent trust).

This may be because political messaging isn’t just about the message but the messenger. Voters usually need to feel that they can trust the person who promises them the thing they want, because the promise alone is insufficient.

It is worth noting that roughly two thirds of respondents say they “do not trust” any of the most high-profile politicians on the list to do what they say they will do on Brexit (Johnson 67 per cent, Farage 62 per cent, Hunt 63 per cent May 66 per cent and Corbyn 73 per cent). While people are less likely to say that they actively “do not trust” Starmer (38 per cent), Swinson (35 per cent), or Watson (38 per cent), this is probably related to the fact that nearly half say they “do not know”.

If you’re a politician hoping to land the politics of Brexit just right what you probably want is a base level of trust and not too high a level of distrust. The big “don’t know” numbers for lesser known politicians give them a chance to win more support over. That’s good news for Keir Starmer or Tom Watson and especially Jo Swinson.