On Tuesday morning after the Easter bank holiday, Daniel is visiting a foodbank for the first time.

The 42-year-old waiter is so tall that his head nearly brushes the mirrored disco ball hanging from the low ceiling of this church hall in Brixton, south London, where the Norwood and Brixton foodbank has been based since 2011.

The local vicar had noticed people ravenous for food during coffee mornings, and joined with other churches to approach the Trussell Trust foodbank charity to start one up.

It’s open on Tuesdays and Saturdays from 10am-1pm, with others in the area covering the rest of the week – including Streatham’s Wednesday evening hours for workers going hungry. It has a roster of 200 volunteers, with eight working each shift for around 25 daily visitors. 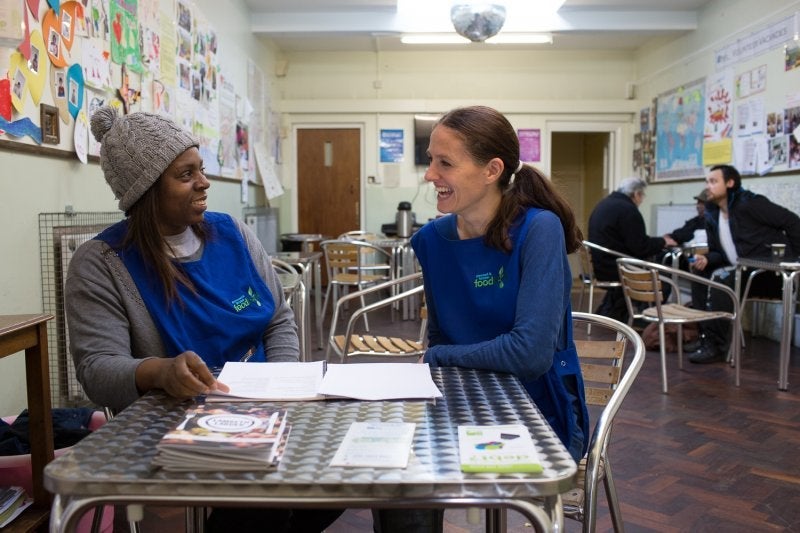 In a cosy grey fleece and blue jeans, Daniel smiles across a table – complete with a glass vase of fresh flowers, like all the silver patio tables set up for visitors here – as he waits for his emergency food parcel, designed to tide him over for three days.

He lost his job earlier this month, and hasn’t been able to find work since. His wife doesn’t work and is also looking for a job, as they try to provide for their six-year-old son.

Daniel was born in Romania but grew up in Spain, coming to the UK three years ago to live in nearby Camberwell. Unemployment and the poor Spanish economy, plus an attractive hospitality industry in Britain, brought him here.

He never imagined the UK was the kind of place he’d go hungry.

“I’ve applied for a lot of jobs, I’ve had interviews, and it’s the end of the month and I can’t afford to go to job interviews because transport is so expensive,” he tells me.

Taking up opportunities across London is financially impossible – one came up in west London’s White City but he couldn’t afford the fare.

“I sold my phone because I needed money, and so I can’t access my email or anything,” he sighs. He goes to the Jobcentre instead to use their computers. “I need to eat. It’s hard. But I’m a strong person, I’m okay.”

After he lost his job, Daniel applied for Universal Credit. It’s the first time he has needed benefits. He says he received the standard allowance of £317, but “it’s not enough for the family”.

“It’s one payment, and it would be fine if you went to work, but we need to pay our rent, we have no money, and no food,” he says. “They [the government] should do more, perhaps free transport for people who don’t have enough and need to travel to look for jobs.”

Jon Taylor, who has managed this foodbank for five years, sources him an Oyster Card that someone has donated. No one knows if there is any money on it. Daniel will soon find out.

Last year, use of this foodbank increased by 22 per cent, well above the 13 per cent national average; this year it’s up again by 1.2 per cent.

The main reason for foodbank use here is low income, followed by having “no recourse to public funds”, which leaves asylum seekers and those without documentation, like Windrush Generation citizens, without welfare.

Foodbank users in Brixton are also going hungry partly because of the benefit system, which – as Daniel is experiencing – is not covering their living costs. In Brixton, benefit delays and changes made up 14 per cent of reasons for referrals –the third most common reason why people rely on foodbanks.

Universal Credit is paid monthly, with a five-week payment delay for new applicants, and moving from legacy benefits onto the new system can deprive people of the money they need.

“Five weeks is too long,” says Taylor, for whom Universal Credit has been the biggest change in the time he’s worked here. “It’s a big, long wait with nothing to fill the gap.”

In Brixton, the number of people referred to foodbanks because of debt has increased by 68 per cent in just one year. “It’s been horrendous,” says Taylor. “Shocking and awful. It’s like banging your head against a brick wall. You’re fighting fire, doing your bit on a local level, hoping national politics will do something…

“We would really like not to exist, but while we are, we are as welcoming as possible. We know what it’s like to be on the breadline.” 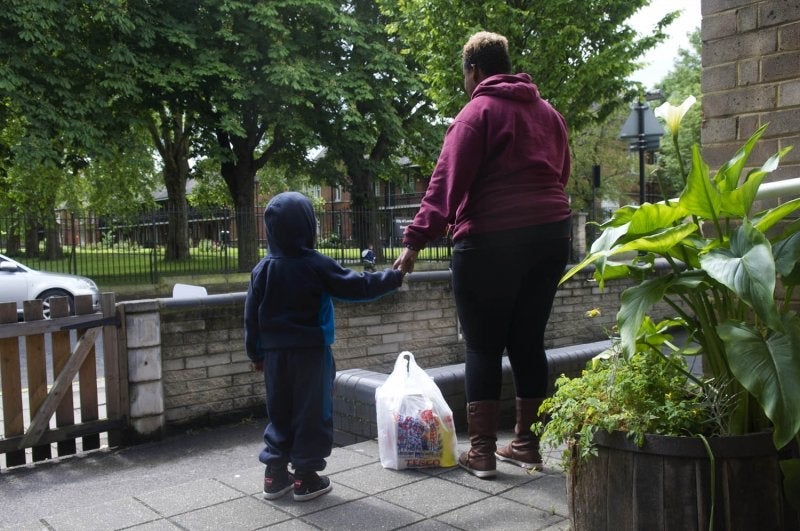 The government should end the five-week wait for Universal Credit, according to the national foodbank charity Trussell Trust, which has about two-thirds of the UK’s foodbanks in its network.

Its annual figures released today reveal a record number of people using foodbanks, at 1.6 million parcels in the past year – the most ever, up 19 per cent on last year, and 73 per cent in five years.

Nationally, the main reasons for foodbank use are benefits not covering the cost of living (at 33 per cent), and benefit delays or changes.

“Our benefits system is supposed to protect us all from being swept into poverty,” comments its chief executive Emma Revie. “We’re urging the government to ensure benefit payments reflect the true cost of living and work is secure, paying the real Living Wage, to help ensure we are all anchored from poverty.”

As in many foodbanks, a benefits adviser is on hand to help clients. Hassan Jalal has worked here for nearly six months. “For most cases, it’s problems with benefits – delayed payments, sanctions,” he says, sitting at his tablet beneath a large map of Lambeth. “If they’re unwell, they miss an appointment, they’re sanctioned straight away.”

Debt is a growing problem. Jalal sees people spending as much as 90 per cent of their benefits on debts, including paying back advance payments of Universal Credit – money upfront that is deducted through future payments.

“People take short-term loans from DWP [the Department for Work & Pensions], and most is deducted from their next benefit payment,” he says. “The loan payments are too high, they should be lowered.” (From October, claimants can repay at 30 per cent of the standard allowance, down from 40 per cent, and from October 2021, over 16 months instead of a year.)

Steve Taylor, a long-distance lorry driver who has had to use this foodbank in the past, feels the government could afford to help people like him.

“After the markets crashed in 2008, there was more poverty, but also more billionaires. People are starving and it’s not a lack of money – it’s wealth distribution,” he argues.

Dressed stylishly all in black in a leather jacket, polo shirt, fitted shorts and trainers, he walks around the room greeting other people, sipping on a soft drink and eating one of the low-cal jellies on offer to visitors alongside tea, coffee and biscuits.

Taylor has come in to visit the foodbank this morning for a chat, rather than a food parcel. His is a “socially inept job, like being in a balloon – you see people passing you, but it’s impossible to speak”.

Listening mainly to praise and worship music on his journeys, he drives to European destinations like Belgium and Luxembourg. He lives in social housing, his marriage didn’t last so “I’m on my own”, and he calls the foodbank a “case of survival”. He won’t tell me his age, but does note that the average age of lorry drivers is 54.

Taylor received his HDV licence in 1990, after pot-washing in kitchens, but has used the previous benefit system and Universal Credit in the past. While he says that Labour’s welfare system “could make you lazy”, Universal Credit is “the other extreme”, in his experience.

“Universal Credit is designed to make you fail,” he feels. “Even with a decent salary, you’re stretching at the end of it [the month]. They didn’t pay my rent for nine weeks. I’ve been left in debt and you have to go to foodbanks so that you can survive. It’s like the poor are deliberately being made poorer.” 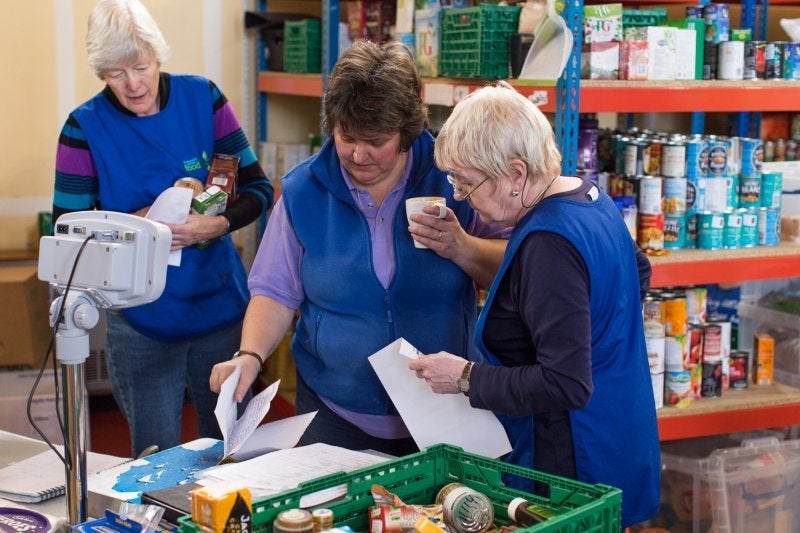 As Taylor chats to fellow visitors, a couple of volunteers in the storage room are putting together Daniel’s food parcel. The donations are meticulously categorised, a mini cityscape of cereal box towers and baked bean battlements. And it’s not only food. Full suits have been donated, tweaked to fit potential job interviewees by a volunteer tailor, for a Job Club run by the foodbank that helps visitors into employment.

Daniel is allowed rice or pasta, tea or coffee, one toilet roll, one tube of toothpaste, one shower gel, one shampoo, a small bag of sugar, porridge, and tins of veg, beans, soup, fish, meat, pulses and pudding.

Along with a packet of biscuits, he gets an additional “luxury item”, from a miscellaneous crate filled with dates, breadcrumbs, hot sauce and organic jackfruit all piled in together. There is also jam and an Easter egg.

It’s 13.1kg of food on the scale, and handed to him in supermarket bags after it’s been weighed.

“My first time,” he says, almost to himself, picking up the bags as he gets up from his table. “I appreciate it.”