In theory, the forthcoming European Elections on 23 May should be an opportunity for Remainers to translate the clear majority for staying in the EU that we see in the polls into actual votes. Remain has been ahead of Leave since the summer of 2017, and recent majorities have been above 5 per cent.

Indeed some in the smaller anti-Brexit parties have been suggesting exactly this: the EU elections should be about Remaining rather than Leaving. Unfortunately things are not that simple, as the following YouGov poll illustrates. 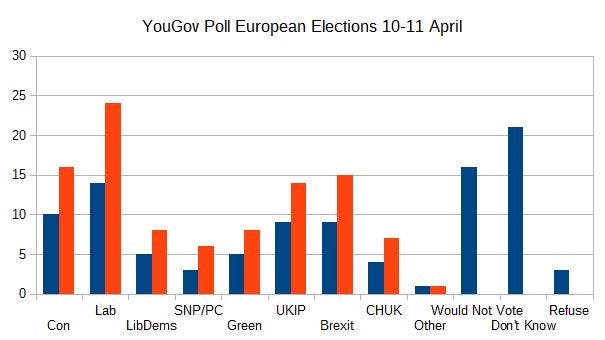 The smaller columns for the parties represent the data with “Would not vote” and “Don’t know” included.

The first point here is that the anti-Brexit parties are polling at around half the level of the pro-Brexit, anti-People’s Vote parties. The key problem, as it has always been for the Remain cause, is that the Labour vote is mostly made up of Remainers. In this poll, 77 per cent of Labour voters voted Remain in the 2016 referendum, and some of the other 23 per cent may have changed their minds since then. Labour is an overwhelmingly Remain party in terms of who votes for it – but its leadership is in favour of its own form of Brexit and appears ambivalent towards a People’s Vote.

Some Remainers would love voters to desert Labour and vote for one of the three unambiguously anti-Brexit parties. But this is very unlikely to happen. Many voters, even though they might support Remain, want a Labour government above all else, and they will vote for Labour despite the poll asking about elections to the European Parliament. This is of course exactly what happened in the 2017 general election. Voting left is hardly an irrational choice for these Remainers, because if we do not leave the EU, the European Parliament does play a minor role in EU affairs, and it is important to have left wing voices there.

The second point is that the elections for the European Parliament is actually about voting for MEPs, so seats matter, as well as the popular vote. The D’Hondt voting system used in British elections for the European parliament combined with voting for MEPs on a regional basis does penalise smaller parties. The Liberal Democrats only received 1 seat out of 73 in 2014, even though they got nearly 7 per cent of the overall vote. As a result, if the Remain vote splits badly, it is conceivable that the total seat count for the Remain parties combined may only be a few seats, which will not look good compared to the double figures that Farage will get.

A very good question is why the anti-Brexit parties have not cooperated. It would be difficult to choose just one of the three parties to stand in each district, but it would not be impossible. Without this cooperation, tactical voting is unlikely to prevent the anti-Brexit vote being split three ways in each England region. It would seem these parties think it is more important to fight among themselves than unite in sending a clear message on Brexit. That will be sad if this failure leads to MEPs only being in the job for a few months. Remain can get a million on the streets and 6 million signitures, but it seems getting small parties to cooperate is a more difficult task.

Given Labour’s position and the lack of cooperation among the anti-Brexit parties, Remainers should not turn these European elections into a vote about being anti-Brexit, because they will lose badly. The combined vote for UKIP, the new Brexit party and the Conservatives is almost certain to exceed the combined vote for the LibDems, CHUK and the Greens. A smarter tactic would be, through the People’s Vote campaign, to make these elections into a vote about a People’s vote. The key difference of course is that Labour can potentially be counted as being in favour of a People’s Vote, and so making the European elections as a kind of referendum on a People’s Vote might succeed. Using the poll numbers above, the pro-People’s Vote parties have an overall majority.

In reality, Labour’s position on a People’s Vote is nuanced, or perhaps just confused. It is in favour of a People’s Vote for a deal it does not like, but is rather ambivalent if the deal is its own. The leadership is divided on the issue. Apparently Keir Starmer was described by Tories in the joint government/Labour negotiations as the “ideologue” for wanting a People’s Vote, while his colleagues were described as seen as more reasonable. The European elections could force Labour’s hand on the issue. This is obviously what the People’s Vote campaign will hope for, but how much the Electoral Commission will allow it to campaign over the election is unclear.

If Labour did unambiguously commit to a People’s Vote in all circumstances it could take votes from the smaller parties, and this may well dominate any votes it may lose from Labour leavers. Labour has the opportunity for an overwhelming victory in these elections, as Brexit will take many votes away from the Conservatives to pro-No Deal parties. However that inducement may not be enough, in part because Labour are constantly thinking about the possibility of a General Election where they do not want to be painted as the anti-Brexit party. Remainers should also have the sense to see that a Labour victory in a general election would be a better option from a Remain point of view than a People’s Vote, for reasons I set out here.

Without a general election, the Brexit position has become a stalemate. Theresa May is set against holding a People’s Vote, and so are Brexiters. Behind all their guff about such a vote being an insult against democracy (“War is peace. Freedom is slavery. Ignorance is strength”), the real reason Brexiters hate the idea of a second referendum is that they think they will lose. Nor has parliament been able to force the government to hold a referendum, with the latest vote in parliament being 280 voting in favor of a People’s Vote and 292 against.

However, no other option looks like getting over the line anytime soon either. Brexit has become a war of attrition. Brexiters are in no mood to accept May’s deal, and instead some have pinned their hopes on replacing her. Even if they succeed, it is unclear how this changes the parliamentary arithmetic. The Tories also fear a general election, for the same reasons Brexiters fear a People’s Vote. Talks between Labour and the government are unlikely to get anywhere because a compromise that didn’t include a People’s Vote would be devastating for Labour; and any compromise by the government would pour oil on the fire of Tory divisions. Finally, the new October deadline set by the EU is unlikely to force anyone to change their mind, because there is a belief in the UK that the EU will always allow another extension rather than risk an exit with no deal.

In these circumstances, a People’s Vote (PV) is going to be seen more and more as the only way out. In parliament it is already the option with most votes. It is just possible that the European Elections could change some minds, if it was seen as an endorsement for holding a PV. But for this to happen, the PV campaign needs to persuade the smaller parties to stop talking about this election as being about Brexit and instead start talking about a People’s Vote.

As far as the media is concerned, the European elections will be about the showing of the pro-No Deal parties. Indeed, it could all be about Nigel Farage: his new Brexit party is well organised, well-funded (from sources unknown), and is likely to get extensive publicity from the BBC at least. (To see the BBC choosing his “put the fear of god into MPs at Westminster” line at their headline quote illustrates all too well the themes of last week’s article on how the media encourages far right extremism.) The poll above, taken before his party was formally launched, indicates that his Brexit party could easily end up beating the Conservatives and coming second, as UKIP voters switch to his party. This will become the main new story.

That will be painful to watch for Remainers – but ironically it could indirectly help the People’s Vote cause. Moderate Conservative MPs will see the poor showing of their party in the European elections and begin to understand more clearly the bind they are in. For as long as Brexit is an issue, they will be in danger of hemorrhaging votes to pro-No Deal parties; but if they accept No Deal, the Conservatives will not be in government for decades. A People’s Vote on May’s deal may be the only chance they have of changing that situation any time soon.

Simon Wren-Lewis is Emeritus Professor of Economics and Fellow of Merton College, University of Oxford. He blogs at mainlymacro.