Along the south coast of Ireland, in the town of Midleton, County Cork – population 12,000 – you will find a stunning monument called “Kindred Spirits”. It was recently installed to commemorate an event from An Gorta Mór, The Great Hunger, the Irish famine of 1845-1849.

In 1847 the Native American tribe Choctaw Nation donated a significant sum of money to Irish famine relief. Having at the time of the famine only recently been subject to the infamous Trail of Tears, the forced relocations of Native Americans, the Choctaw saw in Ireland a people being subject to similar colonial policies to themselves.

They wished to alleviate suffering during what was perhaps the most seismic demographic change in modern European history: the death by hunger of more than a million UK citizens and the migration of another million – at a time when food was being actively exported from the country to Britain and elsewhere.

And although it might be forgotten by some, Ireland was, during the famine, a full constituent part of the United Kingdom of Great Britain and Ireland, following the Act of Union in 1800.

The Kindred Spirits monument has nine 20-foot stainless steel eagle feathers arranged in a circular shape, representing a bowl filled with food, and its 2017 opening ceremony saw a large contingent of Choctaw Indians travel from their transplanted home of Oklahoma to Cork. There, citizens of both nations took part in Irish and Native American dancing, and the Native Americans spoke of their love for Ireland. Irish Taoiseach Leo Varadkar recently travelled to Oklahoma to launch a new scholarship specifically for third-level Choctaw students to study in Ireland, in gratitude for their donation. 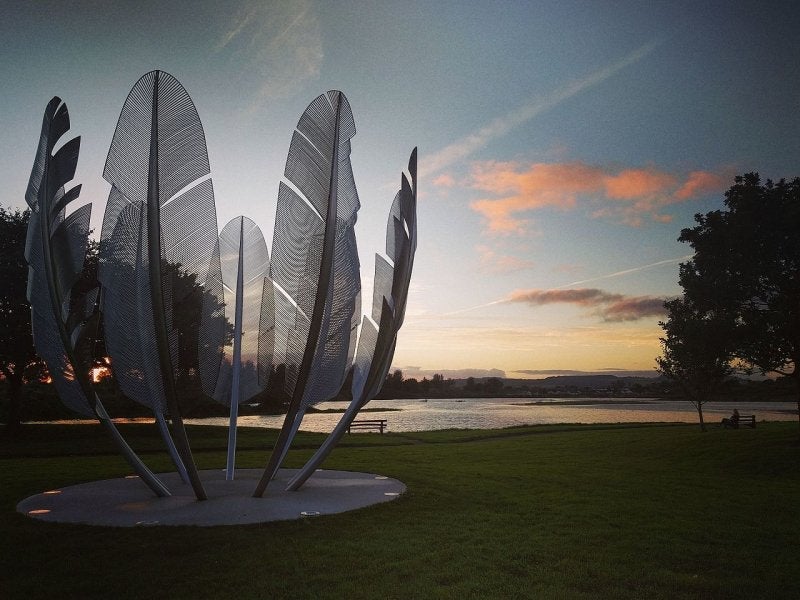 The famine – perhaps more so than any other event in Irish history – shapes Irish perceptions of its relationship with Britain.

It is worth recalling the laissez faire nature of London’s response, which largely involved a policy of letting Irish people starve, either because it was claimed that it was their own fault and they deserved it or because ideologically you could not give something to someone for nothing. Or as the assistant secretary to Her Majesty’s Treasury Sir Charles Trevelyan wrote, the famine was an “effective mechanism for reducing surplus population”.

“Judgment of God,” he continued, “sent the calamity to teach the Irish a lesson, that calamity must not be too much mitigated… The real evil with which we have to contend is not the physical evil of the Famine, but the moral evil of the selfish, perverse and turbulent character of the [Irish] people.”

Rugby fans in Britain will be familiar with Irish fans singing “The Fields of Athenry” during matches – the first verse is worth noting for its reference to the criminalisation and deportation of starving Irish people for the crime of stealing food: “For you stole Trevelyan’s corn… So the young might see the morn… Now a prison ship lies waiting in the bay”

So devastating was the famine, that Ireland is the only country in Europe with a lower population today than in 1840. And so recent was the event that the grandparents of most Irish people will have stories passed down from their parents and grandparents about the devastation the famine caused.

And so seismic was the event it would lead to the dominance of Irish nationalism in politics in the decades that followed it – up to and including a renewed push for independence.

As well as the Kindred Spirits monument, Midleton has – as most Irish towns do – a large memorial to the IRA.

The memorial is in two languages, Irish and English. The English side reads: “Erected in memory to the officers and men Battalion Cork Number 1 Brigade, the Irish Republican Army, who gave their lives in defence of the Irish Republic from 1916 to 1922… we speak with affection, of the men who died in the battle for freedom.”

This commemorates the local IRA brigade responsible for the killing of Crown forces – including the “Black and Tans”, the nickname for the Royal Irish Constabulary Special Reserve, and the hated Auxiliaries, or “Auxies” – during the Irish War of Independence. The Auxies were the counter insurgency element of the Royal Irish Constabulary (RIC) – infamously responsible for in 1920 drunkenly burning down Cork city centre, now the second largest city in Ireland. 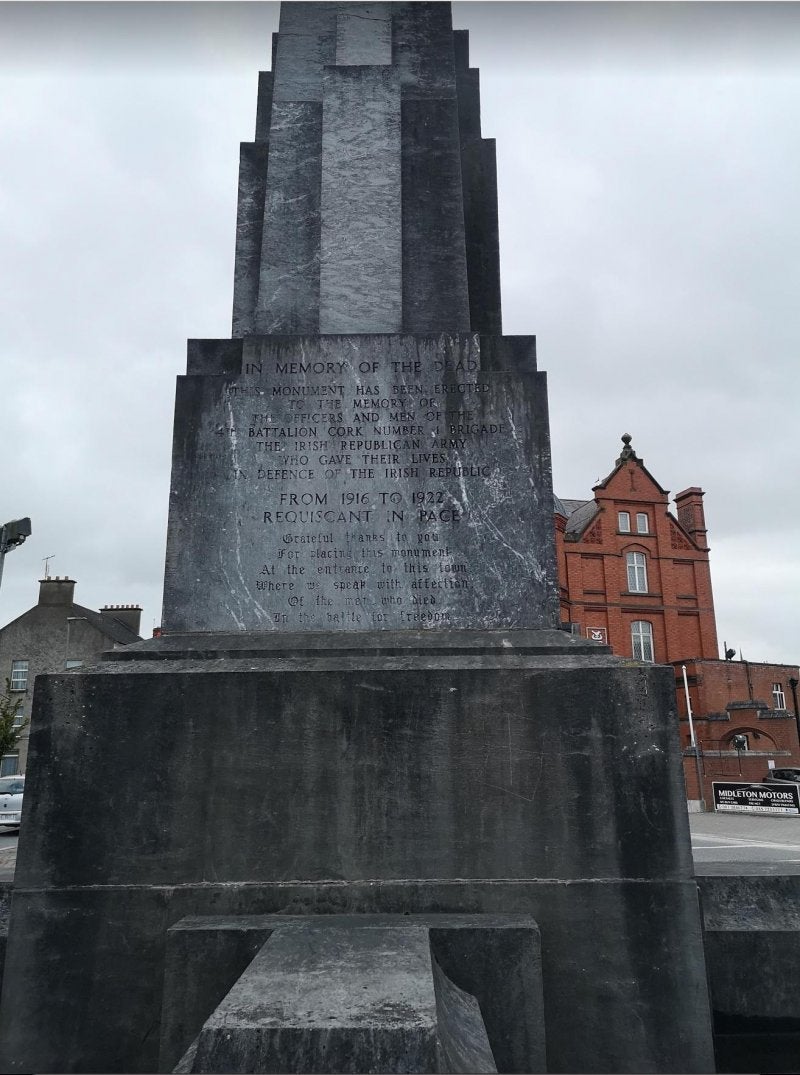 Memorial to the men of the IRA in Midleton, County Cork. Image credit: Gavin Sheridan.

The Irish side of the monument lists the names of IRA members killed during the war, including 12 who lost their lives in the Clonmult ambush just outside the town, and two prisoners, captured at the ambush, who were later executed by Crown forces. It was the IRA’s single biggest loss of life during the near two-year war.

It was a war that would eventually bring British prime minister Lloyd George and then colonial secretary Winston Churchill to the negotiating table, and to the Anglo-Irish Treaty of 1921 – the withdrawal agreement of its day.

Just before Christmas in 1921, the House of Commons was debating the agreement – signed a few weeks prior in London by Irish negotiators – which would bring about the first step in an Irish exit (or at least the “southern” part of it) from the UK.

During one of the debates, Churchill took a moment to muse on Anglo-Irish relations generally. “[Ireland] is a small, poor, sparsely populated island, lapped about by British sea power, accessible on every side, without iron or coal,” he said. “How is it that she sways our councils, shakes our parties, and infects us with her bitterness, convulses our passions, and deranges our action? How is it she has forced generation after generation to stop the whole traffic of the British Empire, in order to debate her domestic affairs?”

“Whence does this mysterious power of Ireland come?,” he asked.

Churchill of course was missing a trick. He forgot – or never realised – that the reason for all of this Irish “bitterness” and “passion” was his country’s brutal legacy of colonialism beginning several hundred years prior, stretching at least as far back as the mid-1500s conquest of Ireland by King Henry VIII and the 1606 plantation (ie colonisation) of Ulster by King James VI, all the way up to the events of the famine.

In those debates from nearly 100 years ago so many now familiar themes rear their ugly heads. Customs between Northern Ireland and the newly formed Irish Free State? Raised. Article 10: Ireland agrees to pay the pensions of former Crown servants. Drawing the actual border with Northern Ireland? Let’s set up a Commission to kick that can down the road (and look how that turned out).

And a word of warning from Irish history – the withdrawal agreement that was brokered by Irish negotiators did not go down well in Dublin upon their return. There was an immediate split between those who supported a stepping stone to a full republic (pro-treaty) and those who would accept nothing less immediately (anti-treaty).

It led to the short, brutal and divisive Irish Civil War, which had far-reaching consequences for Irish politics.

Which brings us to today.

The two largest political parties in Ireland – which are in government via a confidence and supply arrangement and, like pretty much everyone in Ireland, support the backstop – were both defined by that Civil War and our exit from the UK.

Fine Gael – Leo Varadkar’s party – was pro-treaty and Fianna Fáil was anti-treaty. Ireland is one of the few European countries without a clear left-right party divide; our political divide for most of our history has instead been whether or not you supported the treaty. And coincidentally, just as the UK is grappling with the Irish backstop, commemorations began last month for the 100th anniversary of the first shots being fired in the Irish War of Independence, a war that led to our own exit from the union.

The parallels with the present day are stark, and the two monuments in Midleton – to the Irish Famine and to the Irish struggle for independence from the UK – might help a British audience more closely understand Irish attitudes generally. It is in these two historical contexts that Irish people tend to perceive our present friendly relations with the UK, because we learn our history through the lens of our nation’s relationship with its former colonial master. And it is this historical context that partly frames negotiations with the UK over the backstop.

“…never was one country so absolutely dependent in economic matters upon another as Ireland and Great Britain,” Churchill said in the 1921 debate, “because we are her sole market and her only source of supply.”

Just recently, after citing incorrect trade figures on Ireland’s economic dependency to the UK, BBC presenter John Humphrys asked Irish minister Helen McEntee if Ireland would not leave the EU and “throw their lot in with us”.

If you understood Irish views of events such as the famine and the War of Independence could you blame Irish people for wanting to throw their radios (or laptops) out the window on hearing such a patently ridiculous question? Some people, it seems, are living in the world as it was 100 years ago.

It’s not the first time history has raised its head. Late last year Priti Patel – a former minister no less – suggested using the so-called UK land bridge for supply of goods – including food – as Brexit blackmail against Ireland in order to secure a better deal from the EU.

It is also unfortunate that Ireland barely features in the history lessons of British schools, even though it was a “member state” of the UK for more than 100 years. Knowledge of both the famine, and our exit from the UK are hard to find.

Overall though, Irish people certainly can’t help but breathe a long sigh at the historical irony of the current predicament. Northern Ireland  – a legacy of both King James VI’s colonisation in the early 17th century, and of Ireland’s exit from the United Kingdom in the early 20th century is now the thing that comes back to bite the UK in the political ass.

This, during a Brexit project driven in large part by English nationalists who hark back to the old days of the British empire, built on false or faulty foundations about what the EU is, and on idealised and shaky notions of the historical positive effects of the British empire on countries like Ireland.

As a result of our history, the attitude in Ireland towards the UK is sometimes “you reap what you sow”, with a certain sense of schadenfreude thrown in. Were he alive my own grandfather would get no end of joy out of watching the “old enemy” self destruct.

But leaving aside all of the nonsense from Brexit politicians, and leaving aside the radical improvement in relations in recent decades between Ireland and the UK partly due to the Good Friday Agreement, by far the prevailing attitude in Ireland is one of utter bewilderment and astonishment at the sheer lunacy, delusion and pointlessness of the entire Brexit project.

Where did all go wrong for the UK?

Gavin Sheridan is an investigative journalist and entrepreneur. He previously worked as director of innovation at Storyful and now runs legal tech company Vizlegal.

Newsletters from the New Statesman View all newsletters
Subscribe for the best of our politics, international affairs, culture and business coverage, straight to your inbox
THANK YOU
Topics in this article : Ireland