Theresa May is under increasing pressure to reconsider the appointment of conservative philosopher Roger Scruton to a government advisory role over comments he made about of the “once respectable subject of eugenics”.

In separate letters to the Prime Minister, seen by the New Statesman, both Labour and the Liberal Democrats have called for Scruton to be removed from the chairmanship of the Ministry of Housing’s new commission on the built environment.

The academic’s appointment to the unpaid role has provoked considerable controversy in recent days, with several MPs calling for his resignation or sacking. The Red Roar website reported on Tuesday that Scruton had told an audience in Hungary in 2014: “Many of the Budapest intelligentsia are Jewish, and form a part of the extensive networks around the Soros Empire.”

BuzzFeed News has since reported that Scruton has described homosexuality as “not normal” and Islamophobia, a concept he has repeatedly criticised, as a “propaganda word”. The same publication also revealed that Scruton claimed in a 2005 lecture that there was “no such crime” as date rape, and said sexual harassment “just means sexual advances made by the unattractive”.

May and the Housing Secretary, James Brokenshire, are facing increasing calls from opposition MPs to sack Scruton over his past comments. The philosopher has denied accusations of anti-Semitism and Islamophobia.

In a letter to the Prime Minister today, Andrew Gwynne, Brokenshire’s Labour shadow, urges May to “reconsider this appointment, and show this country that this government is not on the side of bigotry and hate”.

Gwynne cites a 2012 article by Scruton for Prospect magazine, in which he said: “The once respectable subject of eugenics was so discredited by Nazism that “don’t enter” is now written across its door.

“The distinguished biologist James Watson, co-discoverer of the double helix structure of DNA, was run out of the academy in 2007 for having publicly suggested (admittedly in less than scientific language) that sub-Sarahan Africans are genetically disposed to have lower IQs than westerners, while the economist Larry Summers suffered a similar fate for claiming that the brains of women at the top end are less suited than those of men to study of the hard sciences.

“In America it is widely assumed that socially significant differences between ethnic groups and sexes are the result of social factors, and in particular of “discrimination” directed against the groups that seem to do less well. This assumption is not the conclusion of a reasoned social science but the foundation of an optimistic worldview, to disturb which is to threaten the whole community that has been built on it. On the other hand, as Galileo in comparable circumstances didn’t quite say, it ain’t necessarily so.”

Gwynne told the New Statesman: “Scruton’s comments on homosexuality, rape, Islamophobia, anti-Semitism and now eugenics show that he is not fit to be a Government advisor. The Prime Minister needs to finally show some leadership and sack Scruton, to demonstrate that her Government is not prepared to stand by this bigotry and intolerance.”

Wera Hobhouse, the Liberal Democrat housing spokesperson, has also urged May to sack Scruton. In a letter to the prime minister, also sent today, she writes:”Since appointing Roger Scruton, there have been accusations of homophobia, misogyny, anti-Semitism and Islamophobia. An individual who holds such views has no place in advising the government at it is deeply concerning that the Ministry for Housing, Communities and Local Government has associated itself with such reprehensible views.

The New Statesman understands that there are no plans to dismiss Scruton or demand his resignation, and Whitehall sources have flatly rejected suggestions that he is anti-Semitic. James Brokenshire is scheduled to introduce a lecture by Scruton, and offer a vote of thanks, at the Policy Exchange thinktank next Wednesday.

A spokesman for the Housing Ministry restated the government’s support for Scruton, issuing the same statement: “Professor Sir Roger Scruton, as a long-standing public intellectual, has strong views on a number of issues.

“He received a knighthood in 2016 and advised the Coalition government on design. His commitment to driving quality in the built environment is well known and he has published extensively on architecture and place, which makes him an excellent candidate for the unpaid chairmanship of the Building Better, Building Beautiful commission.”

Responding to Gwynne, Scruton told the NS that he did not “regard eugenics as a respectable science, or indeed as a science of any kind”.

“The views attributed to me by Mr Gwynne are not mine but James Watson’s, apparently expressed in a letter to the Sunday Times. I have never expressed any such views, and certainly not in the article referred to in Prospect, which was a review of Jesse Prinz’s book Beyond Human Nature, on the nature/nurture dispute,” Scruton said.

“Prinz was discussing the question whether attributes of human beings frequently attributed to culture, and therefore regarded as subject to cultural change, are in fact the result of evolutionary adaptation, and therefore part of biological destiny. I referred to eugenics, since that was the first attempt to give a scientific basis to the notion of biological versus cultural inheritance, and in describing this ‘science’ as ‘once respectable’ I was referring to a well-known episode in intellectual history, when George Bernard Shaw preached eugenics – the ‘science’ of ‘better breeding’ – as fundamental to the socialist cause.”

“My language surely implies that I do not regard eugenics as respectable science, or indeed as science of any kind. Mr Gwynne has probably not read further in my review than the parts retailed by Buzzfeed and, although he has time to write malicious and mendacious letters to the PM, it is surely only right to assume that he does not have time to immerse himself in a difficult and sensitive argument about a question that it requires a measure of intellect and scientific knowledge to understand.” 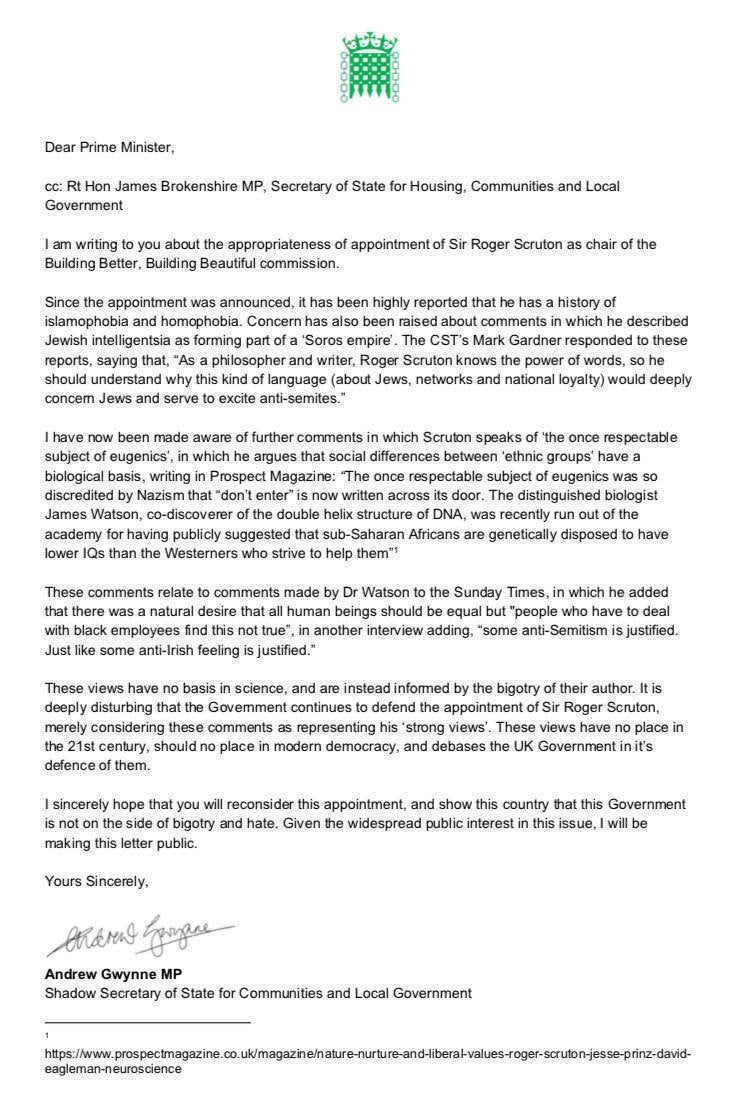 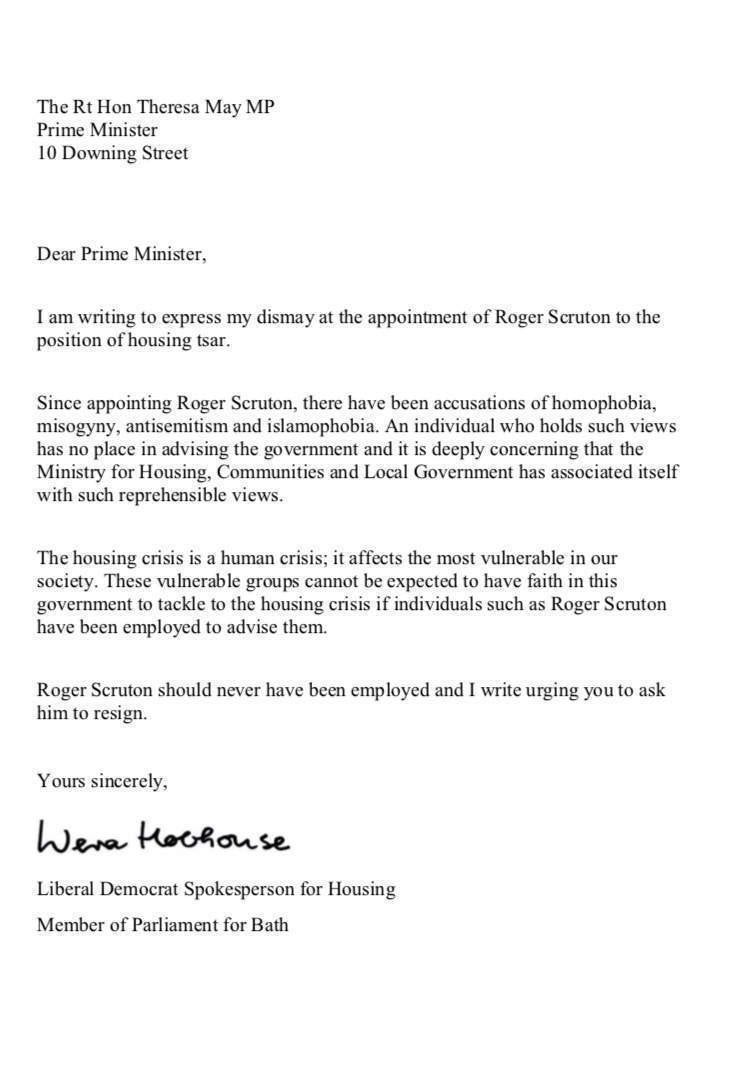 Update: This article was amended on 9 November to include a response from Roger Scruton.