Bastion of impartiality and out-of-work town crier Andrew Neil has deleted a sexist and wildly unprofessional tweet about a fellow senior political journalist.

In a bizarre response to someone entreating him to appear at the Royal Variety show (rapping to a Nicki Minaj song), Neil showed off his great journalistic experience and level of cool-headed authority by boasting:

“Nothing compared with having to deal with mad cat woman from Simpson’s, Karol Kodswallop.” 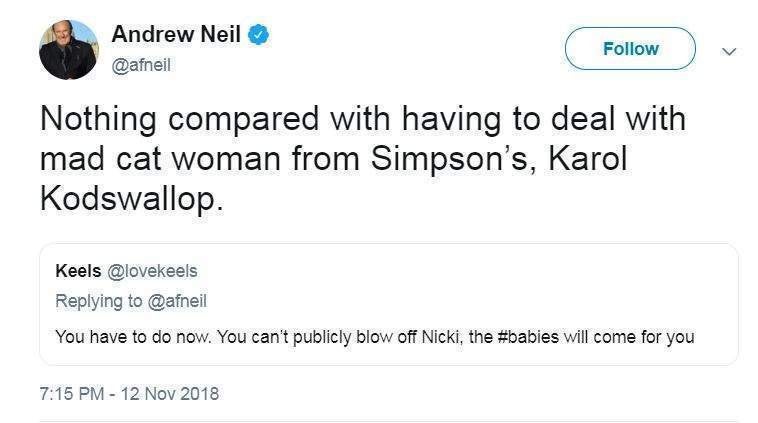 His sexist whining refers to Carole Cadwalladr, the prizewinning investigative journalist well-known for exposing the Cambridge Analytica scandal in the Observer.

The comparison? Eleanor Abernathy, a woman known as “Crazy Cat Lady” on The Simpsons (yes, no apostrophe needed). The character studied at Harvard and Yale, becoming a qualified doctor and lawyer – “because a woman can do anything”.

Well, clearly not according to Neil, they can’t. He has since deleted the tweet, but it says enough about his attitude towards a high-profile woman writing about politics that he would publicise such disrespect for her in the first place.