If Katie Hopkins crooned, this is what it would sound like. Yes, vegan reactionary and sad middling solo artist Morrissey has treated us to more of his political opinions, and they are a masterpiece of self-parody and wounded white whining.

Here are the top ones:

What next, a third referendum?!

And then what? A fourth referendum?! And after that, what do they want? A FIFTH REFERENDUM??? And I suppose then they’ll want a SIXTH bloody referendum won’t they?! Essentially, what he’s conveying in a highly sophisticated way is: WHEN WILL IT STOP?!

An attack on Tesco employees and the shadow home secretary

Snobbery and a lazy attack on the most-attacked politician. Take that, political elite. But he’s still a working-class hero and an individual with his own unique opinions tho.

It is impossible to retire

You can though. You can. Please.

Hitler was a leftie!

That bloody snowflake Hitler, with his identity politics and his LOONY LEFT obsession with no-platforming entire ethnic groups. Absolutely no regard for the left behind. No wonder there’s been a backlash from white communities. Political correctness gone mad.

If someone calls you racist, they mean you’re enlightened

Yep, I hear you. Whenever I express my visceral  disgust towards people of a different race than me, all I do is try not to get distracted from how enlightened I am. What’s that? Nope. Can’t hear you under all the enlightenment. La la la, enlightened.

Theresa May loves animals getting their throats slit 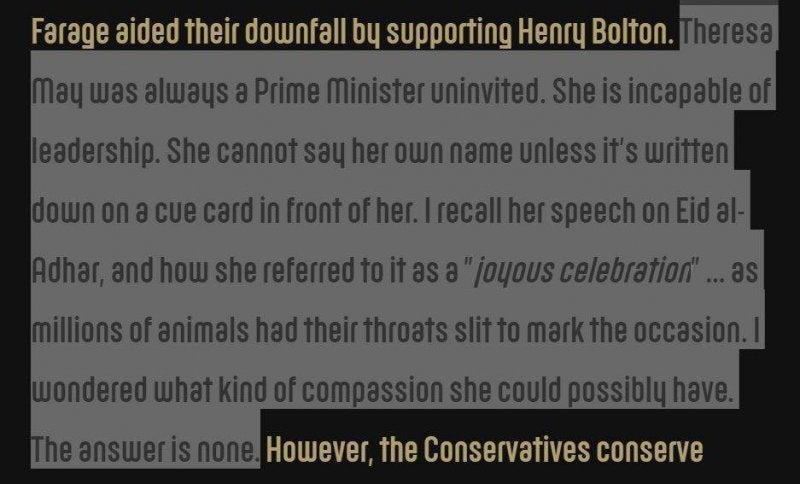 Sure. This is the cruellest of famed immigrant fan Theresa May’s political pronouncements.

IS decide our food standards

What is this comedy slaughter ad he’s talking about? Is he thinking of the Laughing Cow? What’s up, Moz?

I wanna go to the Palace. Invite me again plz.

Republicanism is dead boys, and it’s so lonely on a limb.

Eating meat is the same as gorging on Sri Lankan humans

Yes. This is the same. There is no problem with this statement. Nibbling a pepperami is the same as gorging on the flesh of people from a different country to you. 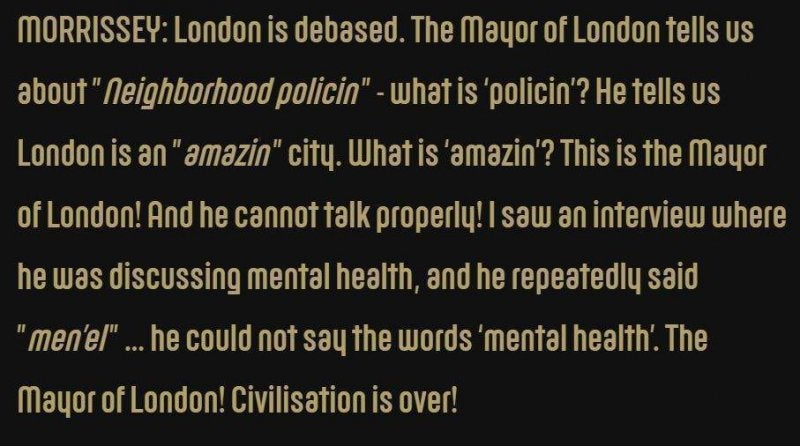 OOOOOoooofff. Did you hear that, political elite? Morrissey has spoken, and he has exposed the rotting heart of the civilisation you have destroyed with one searing political indictment: a mild south London accent. Made u think, Sadiq Khan, you nefarious T-DROPPER you.

Poundshop Daily Mail analysis aside, this is definitely a title for the next mediocre solo album. Accompanied perhaps by a picture of a pensive-looking young Enoch Powell in whimsical spectacles.