As I wake up to yet another story of a mass school shooting in the USA, the feelings and emotions of that crisp Wednesday morning on March 13th 1996 in Dunblane come flooding back into focus.

I had dropped my 3-year-old daughter off at her nursery around 9am and made my way to work. About an hour later, my mother phoned me in a blind panic to say that there had been shootings in Dunblane. My colleague and I had been oblivious. I quickly looked on teletext (this was pre-mobile and the internet days) and saw that the story was already headlining.

Dropping everything, I immediately went back to collect my daughter. The car radio was bringing sketchy updates, but it was clear that something major had happened and that several children had been killed. On arrival at the nursery, all was calm. It felt surreal that I had walked into a world that was closeted from outside, where everything seemed normal and as it should be, and yet all the while knowing other parents wouldn’t be collecting their child ever again. Standing there holding my precious daughter close, without realising the full extent of the carnage that would soon be revealed.

As I drove the five miles back to my house all I could think about was my neighbour and friend across the road. Her husband had died of cancer the previous October and I couldn’t bear to think that one of her children had been affected. I knocked on her door and an unknown woman answered. Was that good or bad? I couldn’t speak. After what seemed like an age, she told me the children were OK. I felt over-whelming relief and yet the full horror of the loss of 16 children and their teacher soon became apparent.

The whole town cried for days. Those of us not directly affected still felt like our hearts had been ripped out, and it was hard to fathom how the families who had lost a loved one could be feeling. The media had a field day, with crews from all over the world descending upon us. Literally a mile of flowers appeared, sent from communities around the globe.

All this took place in our small innocent country market town, deemed a city only because of the 12th century medieval cathedral, surrounded by rolling countryside, farmland and hills and with a thriving local community. This sort of massacre didn’t happen in Scotland. nor in prosperous Dunblane. This happened in other countries, in other cities, in other places around the world. In South Africa. In America. Not in rural Perthshire. 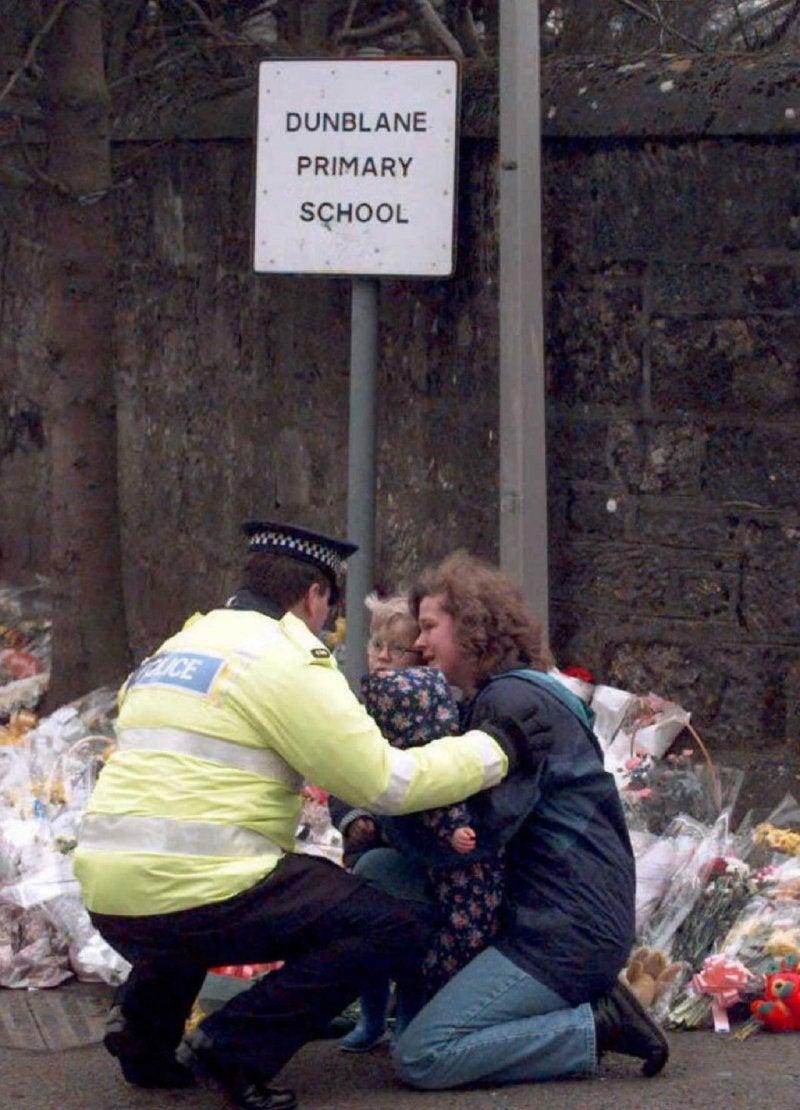 I had been going to a yoga class in Stirling, one which had a crèche, and it was there that I met Ann Pearston. A few days after the event we were at the class, and both felt that we needed to do something so that a similar tragedy would never happen again on UK soil. It should be the last time that licenced handguns could be used to tear lives apart, as they had for the 17 Dunblane families and their friends – not to mention the many more who would live with the physical and emotional scars of being in the gym and at school that day, or from being on duty as part of the emergency services.

When Ann said she was starting a petition to ban all handguns in the UK and asked if I would I be up for helping, I was in without a second thought. Three of us started the campaign and organised A4 sheets of petitions and so the Snowdrop Petition was born; named after the only flower in bloom at the time. Days later, we had our first street stall in Stirling to garner support. News of the petition gained traction and within a couple of weeks we had people all over Britain asking for copies and organising their own stalls. The completed sheets started to come back in their hundreds. Within ten weeks we had approximately 750,000 signatures demanding a change to legislation. By the time we had presented the petition to parliament, the number was above one million. It was the most successful grassroots campaign in the UK then and to this day.

We had engaged politicians from across the political spectrum, and connected with people affected from the Hungerford shootings in 1987. With so many people pressing for change, if one person’s energy waned, another would pick up the baton. It was difficult for even the most hardline gun enthusiast to not be touched by the heartfelt interviews with the parents who had lost their precious children. How could a weekend hobby be worth the life of an innocent child?

The Gun Lobby persisted with their usual tactics. “It’s not guns that kill people, it’s people that kill people.” But why, in a civilised society, do we allow people to own guns that are capable of mass murder in a matter of minutes? Our own massacre had been committed using legally owned rapid-fire handguns, and the perpetrator had 743 cartridges of ammunition on him – enough to have killed every child in the school. Yes, he was a loner with a difficult upbringing; and yes, most gun owners are responsible and would never think of turning their guns on anyone, but surely the risk is too great even if only one more life is lost due to a legal gun owner who “flips”.

It took a change of government in 1997 to bring the handgun ban into effect, but our persistence and steady campaign had paid off. The UK has not seen another mass shooting using handguns. Indeed, there has only been one mass shooting since in 2010, when 12 people tragically lost their lives to a man who legally owned a shotgun and 0.22 calibre rifle.

In Scotland, as we have our own legal system, we have strengthened the law further and since December 2016 all air weapons require a licence. While the UK record of deaths from firearms is very low, at below one per million people annually, it is even lower in Scotland.

This brings me back to the United States. To a country whose response to the 22 Sandy Hook deaths is for people to ask for school teachers to be armed, rather than calling for people to disarm and to move for proper regulation of firearms and thorough background checks. There are 101 guns for every 100 Americans. That’s the legal ones.

How many more are actually in circulation? A country where millions of dollars are spent protecting its borders from “terrorists” from outside the US, who killed 68 Americans in 2016; when there are 96 deaths every day, of which seven are children and teens, or 13,000 a year, killed because of the nation’s obsession with the second amendment and the “right to bear arms”. An amendment that was supposed to allow Americans protection against their government, and not be used so that people could terrorise each other. Since Sandy Hook in December 2012, a gun has been fired on school grounds nearly once a week, that’s more than 290 times. In the six weeks of 2018, there have already been 18 school shootings.

Then you listen to politicians, the National Rifle Association, and others who say that the latest families from Florida have their “thoughts and prayers”. I tell you what, I wouldn’t want thoughts and prayers, I would want policies and regulation and a grown-up discussion about changing the American gun culture. “Thoughts and prayers” won’t bring any of those children back, but regulation could stop more families facing the torture of life without their child, wracked with guilt about letting them go to school that morning.

The American gun lobby is a mighty force, but cultural change can happen. Where there is a will, there is a way. Who would have thought that New York, Ireland, and Scotland would be the first three places in the world to ban smoking cigarettes in public places? Who could now imagine putting innocent lives at risk by driving home after a night of drinking, which was culturally acceptable just a few decades ago?

There is no doubt that Scottish and British culture is different to American culture, but not that different. The British reaction to Dunblane was to embrace the shift that was necessary to reduce legal gun ownership on our shores. Surely it’s time for America to do the same?