On a less-than-glowing day for the UK’s rail companies (ticket prices have gone up 3.4 per cent on average), the East Coast branch of Virgin Trains has just made things much, much worse – with a spectacularly terrible lesson in customer service.

Responding to a passenger tweeting about being called “honey” by a train manager she complained to, the company’s social media account replied asking whether she’d prefer to be called “love” or “pet” instead. 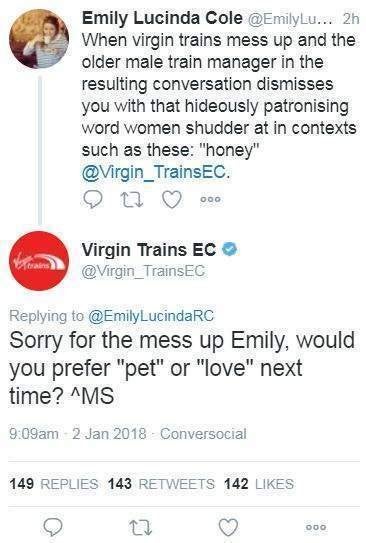 When asked to comment on this employee’s casual sexism and mockery of a passenger, a Virgin Trains east coast route spokesperson told your mole:

“We apologise unreservedly for this tweet and for the offence caused. To avoid causing more offence we have deleted the original post.”