Even now, there are some who persist in claiming that Boris Johnson’s use of the £350m a week figure was accurate. The UK’s gross, as opposed to net EU contribution, is precisely this large, they say. Yet this ignores that Britain’s annual rebate (which reduced its overall 2016 contribution to £252m a week) is not “returned” by Brussels but, rather, never leaves Britain to begin with.

Then there is the £4.1bn that the government received from the EU in public funding, and the £1.5bn allocated directly to British organisations. Fine, the Leavers say, the latter could be better managed by the UK after Brexit (with more for the NHS and less for agriculture).

But this entire discussion ignores that EU withdrawal is set to leave the UK with less, rather than more, to spend. As Carl Emmerson, the deputy director of the Institute for Fiscal Studies, notes in a letter in today’s Times: “The bigger picture is that the forecast health of the public finances was downgraded by £15bn per year – or almost £300m per week – as a direct result of the Brexit vote. Not only will we not regain control of £350m weekly as a result of Brexit, we are likely to make a net fiscal loss from it. Those are the numbers and forecasts which the government has adopted. It is perhaps surprising that members of the government are suggesting rather different figures.”

The Office for Budget Responsibility forecasts, to which Emmerson refers, are shown below (the £15bn figure appearing in the 2020/21 column). 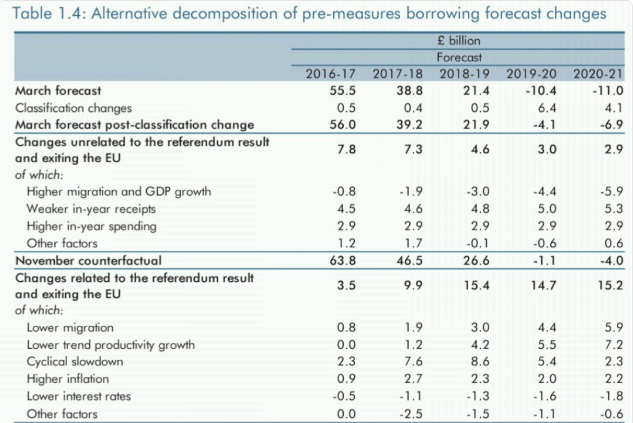 Some on the right contend that a blitz of tax cuts and deregulation following Brexit would unleash higher growth. But aside from the deleterious economic and social consequences that could result, there is, as I noted yesterday, no majority in parliament or in the country for this course.