Thursday 21 September is the UN-designated International Day of Peace. At noon on this day, which has been celebrated for the last 25 years, the UN general secretary will ring the Peace Bell on the UN headquarters in New York and people of good will around the world will take part in events to mark the occasion. At the same time, spending on every conceivable type of weaponry will continue at record levels.

The first couple of decades after the end of the Cold War saw a steady reduction in conflict, but lately that trend seems to have been reversed. There are currently around 40 active armed conflicts around the world with violence and suffering at record levels. According to the 2017 Global Peace Index worldwide military spending last year amounted to a staggering $1.7 trillion and a further trillion dollars worth of economic growth was lost as a result. This compares with around 10 billion dollars spent on long term peace building. 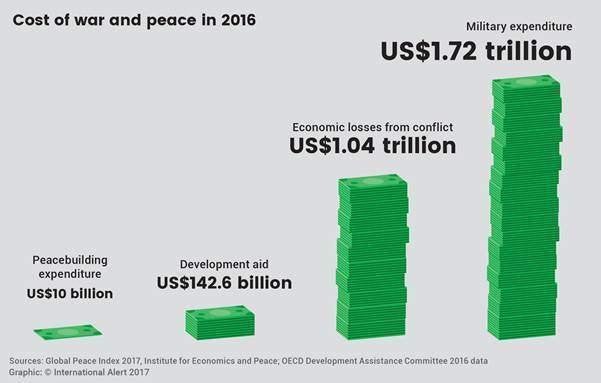 To mark World Peace Day, International Alert, a London-based non-government agency which specialises in peace building, is this week publishing Redressing the Balance, a report contrasting the trivial amounts spent on reconciliation and the avoidance of war with the enormous and ever growing global military expenditure.  Using data from the Institute for Economics and Peace, the report’s author, Phil Vernon, argues that money spent on avoiding and mitigating the consequences of conflict is not only morally right, but cost-effective – “every dollar invested in peace building reduces the cost of conflict”.

According to Vernon, “the international community has a tendency to focus on peacemaking and peacekeeping at the expense of long term peace building.”  There are currently 100,000 soldiers, police and other observers serving 16 UN operations on four continents. He says what’s needed instead of just peace keeping is a much greater sustained investment, involving individuals and agencies at all levels, to address the causes of violence and to give all parties a stake in the future. Above all, although funding and expertise can come from outside, constructing a durable peace will only work if there is local ownership of the process.

The picture is not wholly depressing. Even in the direst conflicts there are examples where the international community has help to fund and train local agencies with the result that local disputes can often be settled without escalating into full blown conflicts. In countries as diverse as East Timor, Sierra Leone, Rwanda and Nepal long term commitment by the international community working with local people has helped build durable institutions in the wake of vicious civil wars. Nearer to home, there has long been recognition that peace in Ireland can only be sustained by addressing long-standing grievances, building resilient institutions and ensuring that all communities have a stake in the outcome.

At a micro level, too, there is evidence that funding and training local agencies can contribute to longer term stability. In the eastern Congo, for example, various non-government organisations have worked with local leaders, men and women from different ethnic groups to settle disputes over land ownership which have helped fuel 40 years of mayhem. In the Central African Republic training and support to local Muslim and Christian leaders has helped reduce tensions. In north east Nigeria several agencies are helping to reintegrate the hundreds of traumatised girls and young women who have escaped the clutches of Boko Haram only to find themselves rejected by their communities.

Peace building, says Vernon, is the poor cousin of other approaches to conflict resolution. In future, he concludes, it must become a core component of future international interventions. “This means a major re-think by donor governments and multilateral organisations of how they measure success… with a greater focus placed on anticipation, prevention and the long term.” Or, to quote the young Pakistani winner of the Nobel Peace Prize, Malala Yousufzai: “If you want to avoid war, then instead of sending guns, send books. Instead of tanks, send pens. Instead of soldiers, send teachers.”

Redressing the Balance by Phil Vernon is published on September 21.   Chris Mullin is the chairman of International Alert.