With polls suggesting Andrea Leadsom will be one of the two Tory leadership candidates put to a vote of the members, it’s only natural to be curious about what this potential prime minister believes.

Luckily, she’s been busily keeping a blog for the last decade.

It turns out she has strong views on babies’ brains, and thinks she may have discovered the secret to preventing a repeat of the riots which plagued London in 2011.

Intriguingly, for a Leave campaigner who has talked down financial panic in recent weeks, she also thinks losing UK’s AAA credit rating is a Very Bad Idea.

Here are some of the more controversial and divisive positions she has taken:

1. Gay couples to the back of the adoption queue

Back in 2009, Leadsom used an adoption case – in which the two children of a heroin addict were given to a GAY couple (!?!?) – to question just when enough is enough when it comes to gay rights. “And if that weren’t enough, the two strangers are a gay couple, who have been selected ahead of several heterosexual couples.” 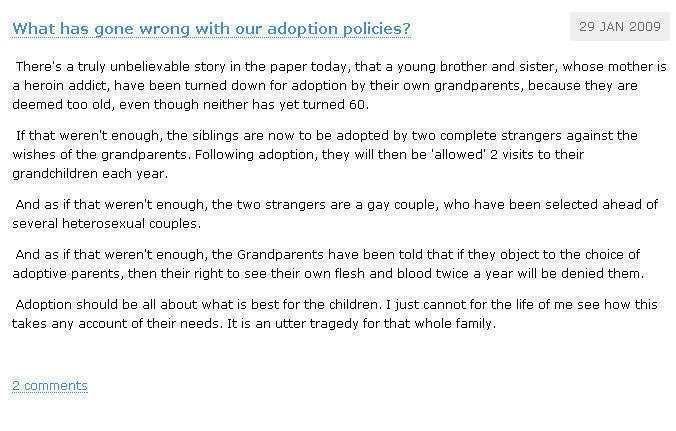 2. Watch out for those single parents

Tough luck for all you children of single parents out there.

3. And that anti-marriage media

“The self indulgence and carelessness of non-committed adult relationships is proving fatal to the next generation,” she wrote in 2008.

Not married? Prepare for a life of DANGER.

4. Losing a triple-A credit rating is bad news after all

“If a downgrade happens, it is a huge blow for our economy, and will potentially set us back several years on repaying our debts, and returning our finances to health,” Leadsom wrote in 2009.

Since the vote for Brexit, both S&P’s and Moody’s have downgraded the UK’s credit rating from AAA to AA-. Shouldn’t someone have reminded her of this 2009 blog post during the referendum campaign? 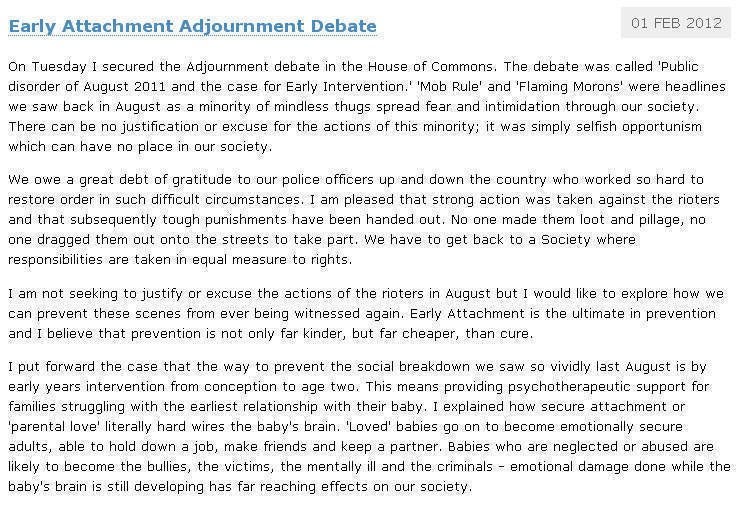 Leadsom has long campaigned around parental attachment, and reportedly spent several minutes talking about babies’ brains at the first Tory leadership hustings, to the bemusement of fellow MPs.

6. No money for wind farms

“I completely welcome the announcement from the European Commission made recently regarding the possibility of ending all subsidies for winds farms,” she wrote in 2014.

Leadsom became energy minister the year after this comment. The renewables industry employs more than 250,000 people in the UK, as well as helping to build a sustainable energy policy, but clearly it’s still a waste of money.

7. Who needs a special relationship?

“He [Obama] shouldn’t be sticking his oar into an issue that isn’t his concern,” Leadsom wrote after the US president warned that Britain would be “at the back of the queue” in trade negotiations if it left the EU.

Let’s hope she develops a more favourable relationship with any future US President.

8. Those US Presidents getting invites before us

“How can France be hosting the 65th anniversary of the Normandy landings with Sarkozy and Obama (neither of them a twinkle in their father’s eye in 1945) in attendance, and yet the Queen of Britain, Canada, and Australia (who was not only alive, but who also served in the war) was not invited until two weeks ago?”

9. She likes bankers getting bonuses

“I should think the Finance Ministers of France, Germany and Switzerland (to name but three!) will be rubbing their hands with glee at the prospect of London’s financial services pre-eminence being scuppered in one move… Big populist gestures like this one now proposed by the Chancellor will not solve the problem.”

We must not do anything to antagonise bankers! Of course, a Brexit that leaves the UK’s financial services industry in jeopardy is quite another matter.