‘‘Brexit” is an ugly, embarrassing word for a ugly, embarrassing debate. After months of bad arguments in bad faith from bad actors running campaigns of confusion and fear with both eyes on their sordid political career, I don’t want to write about this any more than you want to read about it. Yet here I am, about to try to persuade you to vote for Britain to remain in the EU, even though we’d all rather stay indoors and stare into the abyss until it starts staring back. I know I would. Still, I’m going to drag myself out on 23 June anyway, because more than anything, I don’t want to be stuck on an island with Boris Johnson.

I could tell you a story about Europe that might tug the sails of your heart, driving you to the polls on a clear day with the wind in the right direction. I could tell you a story about noble ideals of unity across borders and cultures, dreamt up in the ruins of two world-ravaging wars – but those ideals are currently burning in the banlieue of Paris and drowning in the Mediterranean. The truth is duller and more dispiriting: the EU, rather like the British government, is a structurally undemocratic institution that is run in the interests of business. And the more terrible truth is that it is the best option we have right now.

That is what it means to be a political writer today. We have to encourage people to pick the least-worst option in order to avert immediate disaster. Leaving Europe without a clear plan for what happens next would be a stupid idea even if the most brutally incompetent Conservatives ever to disgrace the unquiet spirit of Margaret Thatcher weren’t running the country.

Brexit has become a terrible game of shag, marry, kill. Who disgusts you less? George Osborne or Boris Johnson? David Cameron or Donald Trump? Would you rather be ruled by ruthless, right-wing ideologues who aren’t even good at being ruthless, right-wing ideologues, or by crypto-­fascists with cartoon haircuts, laughing as they drive this clown car over the precipice of sanity? Reader, this demeans us both. 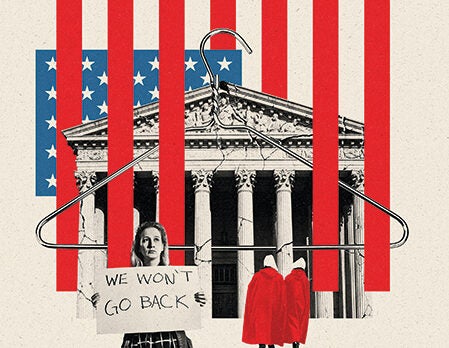 Roe vs Wade and the land of lost liberty

The reason why nobody in either the Leave or the Remain camp can come up with a strong and positive story is that right now there is no strong, positive story to tell. To speak of what is happening in Europe as a “democratic deficit” is to call a sucking chest wound a graze.

The injuries that have been done to the body politic by decades of neoliberal gerry­mandering, of power shunted towards an unaccountable centre – these injuries are profound and they are systemic. They cannot be healed by stepping out of the EU. Nor can a union that is engaged in driving Greece back into fascism be trusted to rectify the damage.

Hope, in this referendum, has been taken off the table. In its absence, both camps have resorted to fear. Team Brexit has playground xenophobia on its side and that’s a jingle it is hard to get out of your head. It’s a campaign so duplicitous and so nakedly reliant on what it imagines to be the worst impulses of its target demographic that employing Nigel Farage as a figurehead actually looks like a sensible idea.

There is no heroism on either side of this sorry mess of a debate, no passion at play beyond the reflexes of prejudice and panic. This is an embarrassing sideshow written hastily by talentless fools in back rooms. You can force us to watch but you cannot make us applaud.

Britain is in political chaos. Call to mind your least stable friend, the one who has spent his or her entire life being messed about by unremitting bastards and now treats self-sabotage as a competitive sport. Imagine that person on a wild bender, full of booze and pills, reeling and yammering and mooning passing tourists before sitting down, head between knees, wailing that they don’t know what to do any more about anything. Now imagine asking that person to make an important life decision, right then and there. That’s what the EU referendum is. It’s not that the people of Britain don’t deserve agency. It’s that we need to drink some water and have a sit-down first, because we’re sick of soundbites and sour politics and we know, with the kind of creeping certainty that arrives at the end of a night of bad decisions, that it’s going to hurt in the morning.

And we won’t be the only ones hurting. A British exit from the EU – forgive me but I refuse to type that God-awful portmanteau word more often than I have to – would bring pain to millions of European citizens who live in Britain and the 1.3 million Britons who have made their home abroad.

If our politicians had an ounce of respect for the people who elected them, they would explain precisely what they plan to do if the country does cede from the Union. Right now, all we know is that Michael Gove might be allowed to write the constitution, which is about as sensible as signing over the nuclear programme to Skeletor, without the exciting He-Man theme tune or, thank God, the Spandex.

Should the British people have more of a say over the way their country is run? Absolutely. But that choice is not on offer at the polls this summer.

It is OK to want more than this ugly, ­demeaning excuse for realpolitik. I think I speak for a great many fed-up British people when I say that I do not want to secede from Europe. I want to secede from modernity. I want out of a notionally representative system that ceased long ago to ­represent the will of the people.

I will be voting for Remain on 23 June and so should you, if you care for the immediate health and safety of your friends and neighbours. But I won’t be doing it with a spring in my step and a song in my heart, and you don’t have to, either.