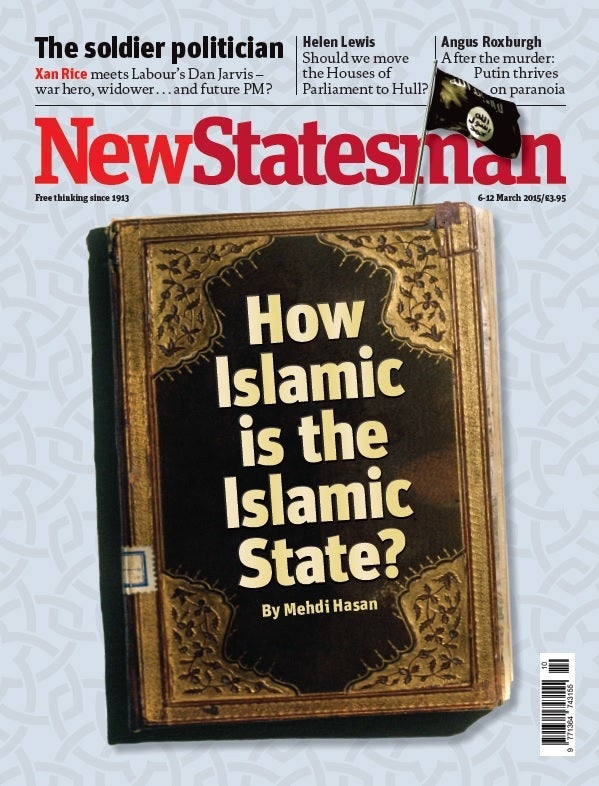 Cover Story: “How Islamic is Islamic State?”
Mehdi Hasan argues that the Quran cannot be blamed for violent political extremism

Helen Lewis makes a modest proposal to turn parliament into 364 affordable flats and make our MPs decamp to Hull.

The Politics Column: George Eaton writes that, in the struggle over housing,the Tories’ blind spots have given Labour the advantage.

First Thoughts: Peter Wilby on hacking at the Mirror and his Tory nightmare.

In a wide-ranging report, Mehdi Hasan writes that Islamic State’s motives are political, not religious.

Asking if Isis is “a recognisably ‘Islamic’ movement” with “recruits motivated by religious fervour and faith”, Hasan consults a range of experts, including the forensic psychiatrist Marc Sageman, who has spent years trying to understand the extremist mindset. Sageman tells Hasan that it isn’t religious faith but a “sense of emotional and moral outrage” which propels people to venture into war zones, and notes that today “Orwell would be [considered as foreign fighter like] a jihadi”.

“Religion has a role but it is a role of justification. It’s not why they do this [or] why young people go there.”

Isis members, he says, are using religion to advance a political vision, rather than using politics to advance a religious vision. “To give themselves a bit more legitimacy, they use Islam as their justification. It’s not about religion, it’s about identity . . . You identify with the victims, [with] the guys being killed by your enemies.”

Hasan speaks to Richard Barrett, the former director of global counterterrorism operations for MI6, who subsequently led the al-Qaeda and Taliban monitoring team at the United Nations. He says that although we “should not underestimate the extent of their belief”, Isis is “mostly to do with the search for identity” and “belonging”, rather than religion:

“The Islamic State offers all that and empowers the individual within a collective. It does not judge and accepts all with no concern about their past. This can be very appealing for people who think that they washed up on the wrong shore.”

Hasan also interviews the former militant Mubin Shaikh, who explains how studying Islam helped him leave his violent views behind:

Religion plays little, if any, role in the radicalisation process, as Sageman and countless experts testify. It is an excuse, rather than a reason. [. . .] To claim that Isis is Islamic is egregiously inaccurate and empirically unsustainable, not to mention insulting to the 1.6 billion non-violent adherents of Islam across the planet. Above all else, it is dangerous and self-defeating, as it provides Baghdadi and his minions with the propaganda prize and recruiting tool that they most crave.

Xan Rice meets the Labour MP Dan Jarvis and they discuss his time in Afghanistan, his role as a shadow minister, and his problems with the laziness of some of today’s politicians:

“I remember on my first day in the House of Commons [7 March 2011] a Conservative MP said to me: ‘The thing that you need to learn about this place is that it is only really a part-time job.’ I was pretty stunned to hear that and it’s completely not the case. You can potter around and do it as a part-time job if you want, but to do it effectively requires a huge amount of effort. I think people deserve that. I am not making any comment about whether I am effective or not. I think people will see that I put the work in.”

Jarvis also expresses his dislike for the “political pantomime” of Prime Minister’s Questions:

“When I go round the schools I cannot justify that level of behaviour to kids who see it and ask me about it. Some people say it makes it more of a spectacle and fewer people would watch if it was not that sort of confrontational environment. I don’t really buy that.”

Jarvis adds that he has an issue with the number of career politicians in parliament, as “the public wants more people with life experience”. He also sees this as partly a representation issue:

“There is an over-representation of people [in parliament] who have been to public schools. That is a fact of life that we should seek to address.

“It’s not to say we have not got exceptional people who went to public schools who can do exceptional things. But we need a parliament that is truly representative of the public that it is there to serve.”

As the Liberal Democrat activists’ darling, Tim Farron MP, launches his re-election campaign in the Lake District, he talks to George Eaton about the future of his party. Farron still shows a great deal of admiration for the Lib Dem leader, praising Nick Clegg “so fulsomely that he is moved to tears”:

“I’ll tell you the thing I am most proud of, most proud of, that nearly nobody knows about, is that there are nearly 3,000 children of asylum-seekers who are not under lock and key now because of what Nick Clegg did with his popularity.

“I hear Nick Clegg being attacked regularly; if you want to know the integrity of somebody, it’s that he spends his political capital, gets nothing for it and makes people’s lives better. That’s a man with integrity.”

Of the number of seats the Lib Dems seem likely to lose, he says:

“I’ve got in my head what I think is a number. There are various sets of numbers, which you think are acceptable, disastrous, brilliant and more shades in between. I was talking about 1997 before: that was our leap forward from being an outsider party to a main-player party. We need to be nearer that ’97 result [46 seats] than, shall we say, the results that came before it and that’s as close as I’ll get to giving you a number.”

Despite that, Farron insists:

“We are absolutely competitive in all the places we’ve been traditionally competitive in.” But he adds: “A major job for us, on day one after the election, is to begin rebuilding everywhere else; you have to protect the citadels first and then we can go out and repopulate the plains.”

Helen Lewis: A modest proposal – let’s turn the Houses of Parliament into 364 affordable flats and make our MPs decamp to Hull

For her Out of the Ordinary column, Helen Lewis writes that when it comes to the Palace of Westminster:

. . . the laudable urge to preserve our history has clotted into an unhealthy attachment to the outdated and antiquated. Any attempt to drag parliament into the 20th century, let alone the 21st, is treated by a certain cadre of MPs as a heresy akin to taking a leak on the Bayeux Tapestry.

She observes that these archaic ideals are visible in the architecture of the palace:

Woven into the very fabric of Westminster are assumptions about who the building – and, by extension, our democracy – is intended to serve. The sashes to hang your sword in the cloakroom may be a quaint relic of an age long gone, but the lack of convenient disabled access and the shortage of ladies’ loos in the old palace are daily reminders that parliament wasn’t built with those groups in mind.

Lewis argues that modernisation is a must for modern democracy, and concludes with the proposal by the campaign group Generation Rent, which has “semi-flippantly suggested that the palace could be turned into 364 affordable flats for hard-up Londoners, and “Parliament could be shipped off to somewhere like Hull”.

It won’t happen, of course. There will be enough trouble trying to persuade MPs to move out temporarily while £3bn of essential repair is done to the building: most would prefer that the work be done around them, even though this will cost more. There is also much sniffing about a new education centre turning parliament into a “tourist attraction”, as if many of those tourists aren’t the voters they are elected to represent. The irony is that, if the Commons does crumble into the Thames, it will be largely because the ultra-traditionalists resisted any kind of modernisation for so long.

The NS political editor, George Eaton, writes that in the struggle over housing the Tories’ blind spots have given Labour the advantage:

On the wall of Ed Miliband’s office is a 1945 Labour poster promising “a non-stop drive to provide a good home for every family”. For the opposition leader, it is a permanent reminder of the need to emulate this crusade. The issue of housing is playing a greater role at this general election than at any other in recent history. Between 1992 and 2010, the subject was consigned to the lowly rung occupied by agriculture, energy and the arts. Once asked why New Labour devoted so little attention to housing in government, the former cabinet minister Hazel Blears candidly replied that no one was interested enough.

He writes that “unlike the Conservatives”, Labour has “recognised the economic reality that, even with state assistance, property will remain prohibitively expensive for many”. The party’s pledges to cap rent increases and ban letting agents from charging fees to tenants should win it votes, while the Conservatives, Eaton says, “have remained largely mute on the subject.”

In future elections, housing will rank alongside the economy, immigration and the NHS as an issue of supreme salience. That Labour enjoys a convincing lead in this area is cause for optimism among the party. As headline polls suggest the Tories may have achieved the hitherto elusive “crossover” required for election victory, it is one the opposition must exploit now.

Peter Wilby on his Tory nightmare.

The Diary: Stefan Buczacki on the pleasures of riddling, Hitler’s phone number and another BBC solecism.

Will Self: Our statues will outlast us – so let’s think twice before making
any more naff public art.

This article was updated 6 March to give context to a quote.