Will we ever get through a story on mental health without the front pages making me imitate Munch’s The Scream in the newsagent’s? It’s looking increasingly unlikely – and frankly, I’m starting to worry everyone in the Whitechapel Londis.

Take this morning, for instance. Yesterday, a press conference shared the news that the co-pilot in the Germanwings crash may have brought the plane down intentionally. Furthermore, it’s been revealed that he had a history of depression, at one point taking a break from his training.

In terms of “topics you might want to cover a bit sensitively”, this one ranks pretty high. But the front pages this morning have admirably stuck to their line of being as awful as possible.

and we wonder why many people with mental health problems feel like they can’t speak out pic.twitter.com/D98svNQLEC

The Daily Mail in particular looks like their reporters scanned the Samaritans guidelines, went “challenge accepted”, and then proceeded to see how many suggestions they could contravene in one go. The guidelines urge journalists to be sensitive when reporting on mental health, reminding them that their writing “might have an effect on vulnerable individuals”. They also advise that stories steer clear of drama or over-simplification. 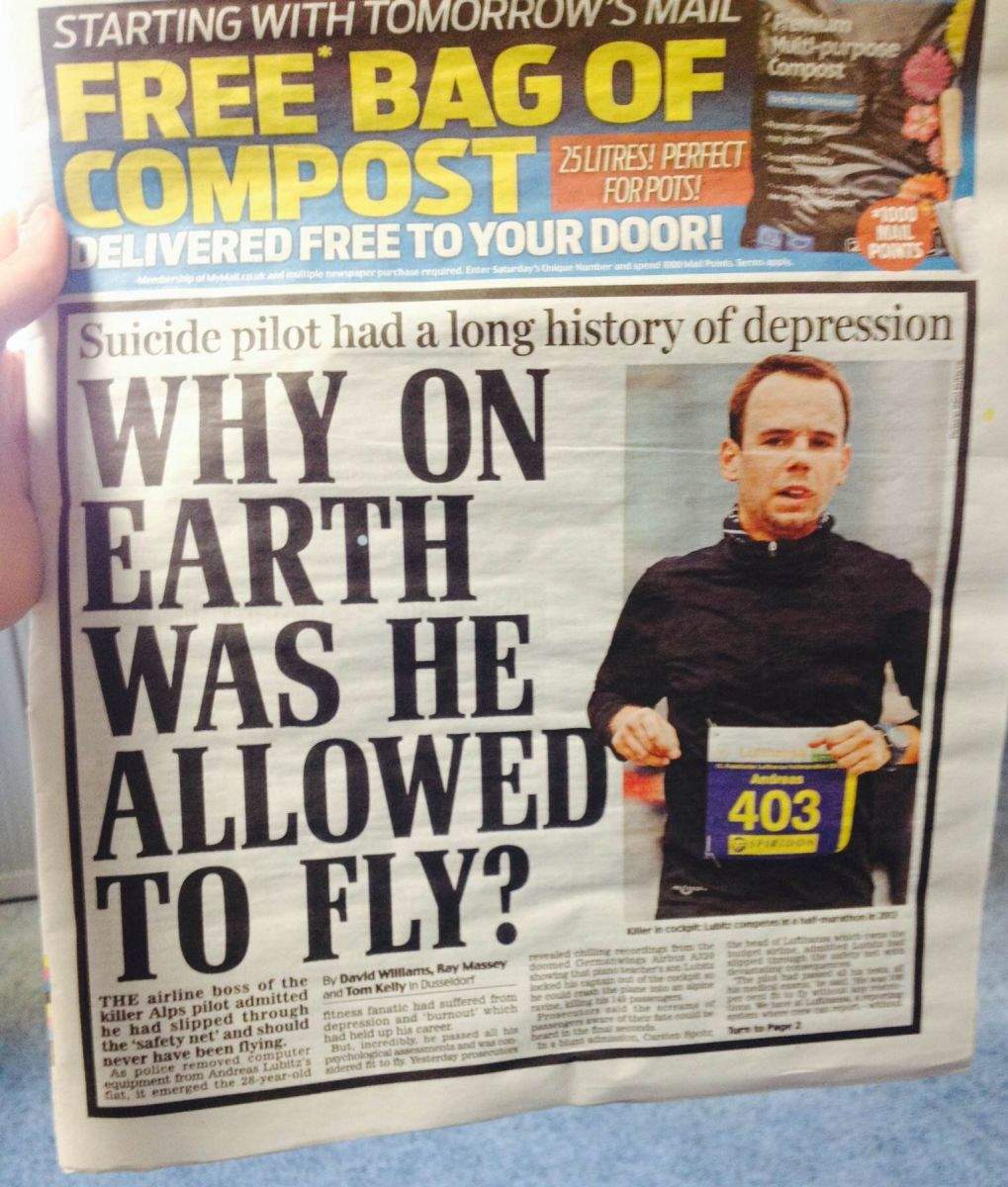 This is probably not a good idea

In a statement this morning, mental health charity Mind helpfully jogged the press’ collective memory re: their obligations:

Clearly assessment of all pilots’ physical and mental health is entirely appropriate – but assumptions about risk shouldn’t  be made across the board for people with depression, or any other illness. There will be pilots with experience of depression who have flown safely for decades  and assessments should be made on a case by case basis.

Today’s headlines risk adding to the stigma surrounding mental health problems, which millions of people experience each year, and we would encourage the media to report this issue responsibly.

The statement reminds us that the front pages today aren’t just insensitive: they also make little sense. Look, I won’t speculate on what might be behind the Germanwing pilot’s actions, because like these papers I don’t actually know yet. But what I do know is that asking in massive bold font why someone with a history of depression was allowed to have their job is misleading and ridiculous.

If we followed the Mail’s logic, the economy would be screwed. Because people with mental illnesses hold down jobs all the time. According to the Mental Health Foundation, 1 in 4 British adults experience a diagnosable mental health problem in any one year. As prescient commenters were quick to point out, it’s statistically likely that the paper has a number of people on staff who suffer from one. All over the world, people with mental health problems manage to work reliably in important jobs: as doctors and nurses, in the police, as firefighters, as politicians.

The truth is, most of us rely on people with depression all throughout our everyday lives – in the vast majority of cases, we don’t even spot it. What must it be like to go through the world outraged by this? Are these folks kept awake at night by the fact that people with depression sometimes drive cars with passengers in? How do they deal with the clinically depressed having children? (Actually, don’t answer that, I’d really rather not know.)

The Daily Mail story begins by narrating the pilot’s “’burnout’” and history of depression, before writing that “incredibly, he passed all his psychological assessments”. Aside from how outrageously incorrect the use of “incredibly” here is – the thing clearly happened –  the suggestion that it’s impossible for someone with previous psychological problems to later be mentally well is naive and insulting. Again, people recover from depression all the time; going on to barely think about their illness.

Suggesting otherwise is – and here I refer again to the Samaritan guidelines – something likely to discourage vulnerable individuals. Given that one of the key symptoms of depression is feeling hopeless, an article that opens with the inference there’s no hope of recovery is what we in the trade call “totally fucking unhelpful”.

Because those of us who live with depression – our own, or our loved ones’ – know only too well what a headline like this does. On their way to work this morning, thousands of people who suffer from a disease whose symptoms include feelings of worthlessless and lack of confidence will have passed a headline that implies they oughn’t to be allowed certain jobs. To be fair, you’ve got to hand it to the Mail sub-editors: 16 words is a pretty efficient length in which to kick people while they’re down.