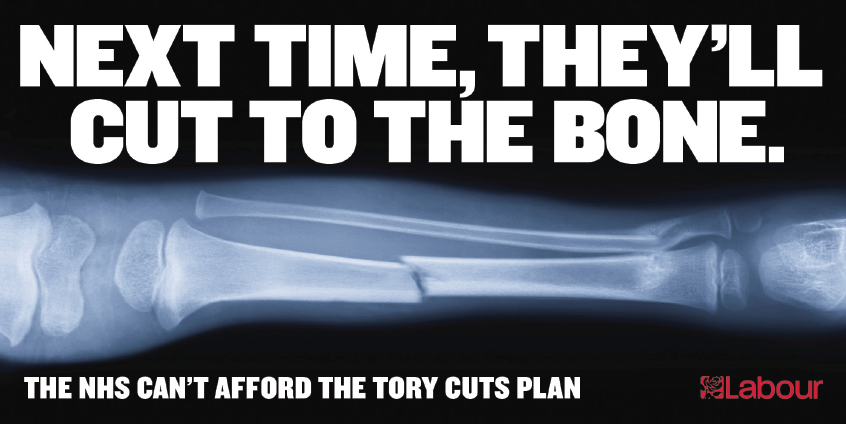 Labour have unveiled their first billboard poster of the election campaign. Designed by Trevor Beattie of the advertising agency Beattie, McGuiness and Bungay, with a line in controversial advertising campaigns – he was the mastermind behind the French Connection ‘fcuk’ campaign – and a long association with the Labour party from his days at TBWA (jokingly nicknamed ‘Tony Blair Wins Again’).

The poster has unveiled in Harlow – target 81 in Labour’s 106 target seats – by Ed Balls and Andy Burnham. Ed Balls said:

The cuts to public services like police, defence and social care under these plans would be so deep they’d be almost impossible to achieve. People will conclude that to make their sums add up the Tories will end up cutting our NHS.
OECD countries which have cut public spending at the pace which George Osborne plans ended up cutting health spending. If equivalent cuts to health spending were imposed on the UK, this could mean £7 billion being cut from the NHS. This would have a disastrous impact on services and staffing levels. Britain needs a better plan. Labour will get the deficit down in a more sensible and balanced way.”

Labour believe that the deficit reduction timetable laid out by Osborne – despite being tweaked to deflect the “back to the 1930s” jibe – is still undeliverable without major cuts to the Health Service and they intend to put the pressure on the Conservatives. But the Tories are already pushing back with a quote from Douglas Alexander in January of this year, saying that Labour’s focus would “not be on negative billboards but on taking a positive message of hope”.

Susan Rienow
Topics in this article :