The unprecedented size of the fall in real wages in the UK since the Great Recession has been well documented. Part of this fall – perhaps more than you might think – is a result of a failed macroeconomic policy. I want to argue that this points to a fundamental flaw in the macroeconomic consensus that has governed policy in the UK and elsewhere for the last two decades. I will suggest how this flaw can be corrected so that macroeconomic policy can be better used to support growth in wages and living standards.

Macroeconomic policy generally focuses on GDP rather than real wages, but the two are directly linked if we look at GDP per head rather than just GDP. Growth over the last four years has been unusually low, just at a time (recovery from a major recession) when you would expect above-average growth. The average rate of growth since the Coalition took power is 1 per cent, compared to a historical average before then of over 2 per cent, and even higher growth rates during recovery periods. 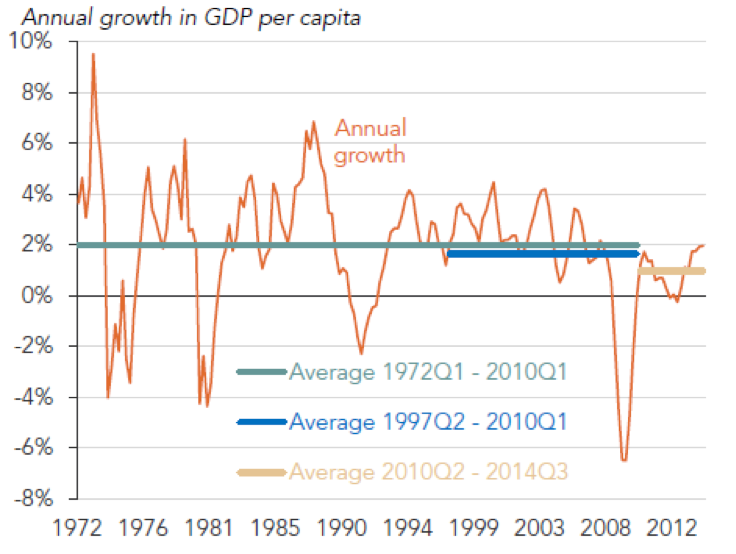 Commons Confidential: Will Allegra be next to turn on Boris Johnson?

Why has this poor performance influenced wage growth? Real wages can only grow strongly without growth in GDP per head by squeezing profits, cutting taxes or through a strong currency appreciation. None of these are sustainable or, indeed, desirable in the longer run. So how much higher could both GDP per head and real wages have been if we had had a better macroeconomic policy? The Office for Budget Responsibility (OBR) estimates that fiscal austerity reduced GDP growth by 1 per cent in both 2010-11 and 2011-12. However there are a number of reasons to think this is very much a lower bound on the impact of austerity.

How much any particular change in government spending or taxation influences output is called a fiscal multiplier by economists. Normally, if changes to fiscal policy threatened the objectives of monetary policy-makers, they could raise or lower interest rates to counter the impact of fiscal changes on demand, thereby reducing the fiscal multiplier. However, since 2009 UK rates have been stuck at 0.5 per cent: what economists call a liquidity trap or interest rates being stuck at their zero lower bound (ZLB). As a result, monetary policy has found it much more difficult to offset the impact of austerity.

In these unusual circumstances, fiscal policy multipliers from changes in government consumption and investment could be much larger than the OBR assumed based on historical evidence. Using a quite plausible value of 1.5, for example, would mean that the austerity enacted in the first two years of the Coalition government could have reduced GDP by as much as 4 per cent, rather than the 2 per cent assumed by the OBR.[1] Furthermore, with interest rates stuck at the ZLB, there is no clear reason why this reduction in demand and output would not persist into later years, leading to a very large cumulative loss in income. Using the OBR’s numbers, and making the most optimistic assumptions about how quickly the economy recovers, implies that austerity in the first two years of the Coalition government had, by the beginning of 2014, wasted resources equivalent to £1,500 for each adult and child in the UK. A more realistic calculation would raise that number to £4,000.[2]

It therefore seems clear that there has been a major failure of macroeconomic policy since the Great Recession. How do we put this right, both in the short term and looking further ahead? In the short term, the answer is pretty straightforward: bring fiscal austerity to an end while interest rates are at or near their lower bound. Even if the central forecast suggests that growth should be healthy (because, for example, oil prices are low).

The reason to delay austerity is straightforward: if growth is stronger than expected, interest rates can quickly be raised to contain inflation, but if growth is weaker than expected, the ZLB means monetary policy cannot support the economy, which is exactly what happened in 2010 and 2011. Regrettably none of the major political parties seem to recognise this implication of basic macroeconomic analysis, but clearly the Conservatives’ fiscal plans take a greater risk with the economy than those of Labour.[3]

The fact that such an obvious macroeconomic proposition – do not undertake austerity in a liquidity trap – should be absent from the thinking of the major UK political parties and their equivalents abroad points to a deeper malaise. It is noticeable that most attempts to reduce deficits since 2010 have focused on cuts in public expenditure rather than increases in taxes. Deficit reduction may therefore be a convenient pretext to achieve a very different goal, which is to reduce the size of the state. If this is the underlying strategy, it has been remarkably successful. Its success comes in part from inappropriate analogies between government and household budgets, which have a particular appeal when households are trying to reduce debt and government deficits are large. This leads to what I call ‘mediamacro’ – elevating deficit reduction far beyond its real importance – which forces those politicians who do not have an interest in a smaller state to follow the deficit reduction line.

These pressures have important implications for future macroeconomic policy. The next time we have a major recession and enter a liquidity trap it will once again be attractive for those that seek a smaller state to argue for deficit reduction when the appropriate policy is fiscal stimulus. We could once again see austerity delay a recovery from a large recession.

The delegation of monetary policy to independent central banks was in part designed to avoid politicians ‘playing politics’ with demand management. As a civil servant once told me, the then Chancellor knew full well that interest rates needed to rise to avoid an increase in inflation, but there was no way that was going to happen until after the party conference. Yet there was an Achilles heel in this plan to delegate demand management policy: the ZLB. At the ZLB central banks can no longer stimulate the economy sufficiently but it seems politicians cannot be trusted to do so either, and may actively make things worse through austerity.

So how do we avoid this Achilles heel? Central banks have tried quantitative easing (QE), and this has had some effect, but it remains a very uncertain and ineffective policy. There is a simple and straightforward alternative which would be much more effective: creating money and giving it to people to spend. This is what economists call helicopter money, although some have recently called it QE for the people. QE involves creating large amounts of money to buy financial assets, with highly uncertain effects on demand. Helicopter money would involve creating much less money with a much more certain positive impact on demand.

Although a number of economists have suggested helicopter money (including Adair Turner generally and John Muellbauer for the Eurozone), it is taboo among central banks.[4] One reason is that banks fear that if they later need to restrict the money supply and raise interest rates, they will be unable to do so. I have explained elsewhere why these concerns are wide of the mark.[5]

Helicopter money is taboo elsewhere because of fears that it will lead to governments spending too much and, because this spending is financed by money creation, this will generate excess inflation. However, a key principle for helicopter money is that it should be initiated by independent central banks and not governments, and only when there is a substantial risk that interest rates will hit their ZLB. In these circumstances, inflation fears are unfounded.

After the election, the new UK government should initiate a debate on helicopter money, with the aim of putting in place this policy in some form. One key question that needs to be resolved is whether central banks should give money directly to the public (and if so, by what means), or whether it should be given to the government on condition that it is used to pay for some form of fiscal stimulus. We should begin this debate now, while the failure of the current macroeconomic policy framework to generate a swift recovery from the Great Recession is fresh in people’s minds.

Introducing helicopter money in some form, to be activated when interest rates came close to the ZLB, could allow politicians to focus on steadily reducing the deficits that inevitably occur after a recession without derailing any recovery. This should continue to be done in the context of medium-term rules, such as the broadly sensible five-year rolling deficit target introduced by the Coalition. In deciding what these medium-term targets should be, governments should increasingly rely on the advice of independent fiscal institutions like the OBR.

To make sure that helicopter money is used expediently by central banks, it is in my view important to give the Bank of England some form of dual mandate, where the objective of achieving the maximum level of employment consistent with long-term inflation stability is given as much weight as achieving the inflation target. A number of macroeconomists have reacted to the failure of macroeconomic policy since the financial crisis by suggesting other radical changes, such as increasing the inflation target from 2 per cent to 4 per cent, or targeting the level of nominal income rather than inflation.

The problem with both these suggestions, which do have clear merits, is that their main appeal is in reducing the number of times we experience liquidity traps, rather than dealing with them when they occur.[6] The advantage of helicopter money is that it gives monetary policy an additional and effective policy instrument that it can deploy when a liquidity trap occurs, so such events no longer have more than a transitory impact on the ability of incomes and real wages to grow. In this regard at least, the existing macroeconomic consensus needs to be changed.

A full version of this article is published in the Resolution Foundation book Securing a Pay Rise: the path back to shared wage growth. All of the essays, along with details of how to receive a hard copy of the book, are available here.