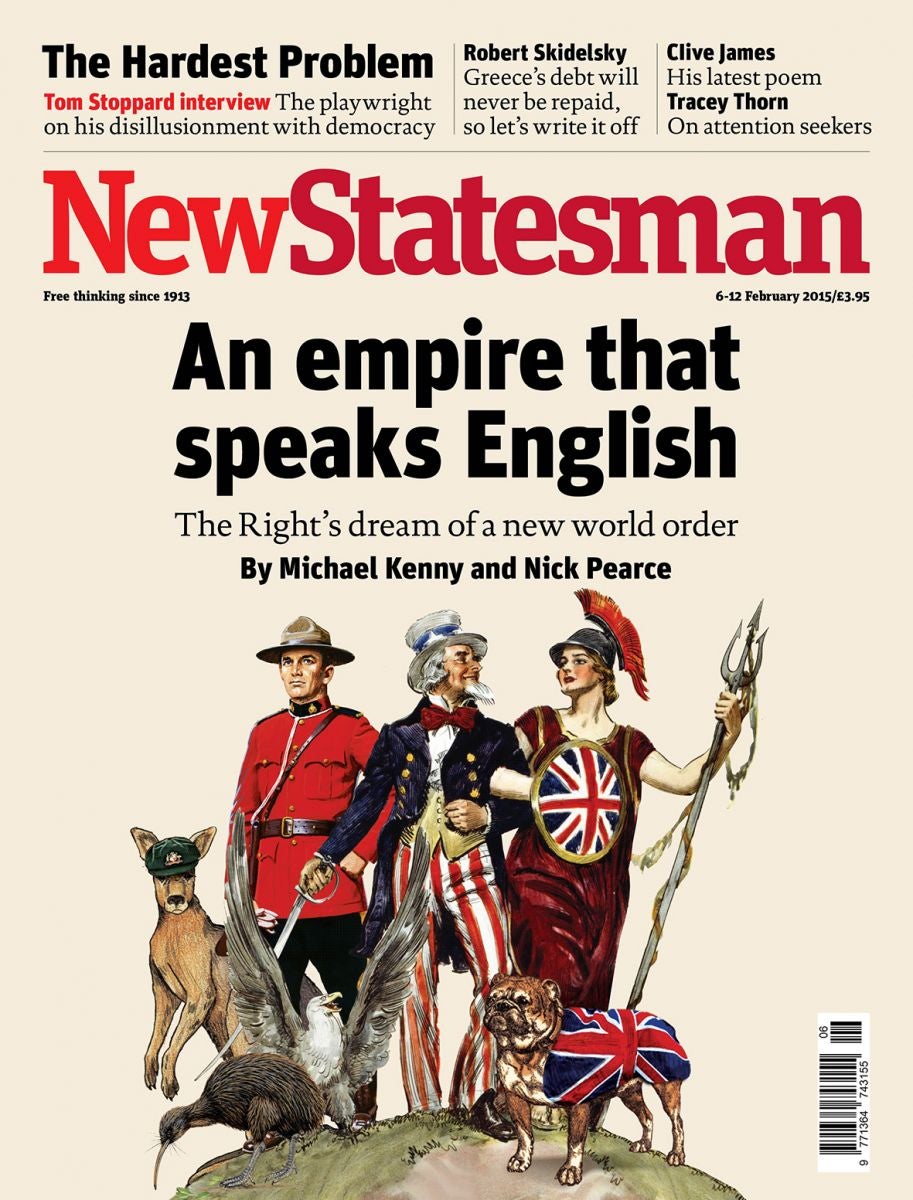 Cover Story: “An empire that speaks English”
Michael Kenny and Nick Pearce on how the right dreamed up a new conservative world order.


The NS Profile: Erica Wagner talks to Tom Stoppard on art, free speech and why it’s a bad time to be a voter.

Robert Skidelsky writes that he agrees with Syriza: the way back to prosperity is not austerity but debt relief.

Fiction: David Vann’s retelling of the bloody tragedy of Medea.

The Politics Column: George Eaton asks if tribalism will prevent a coalition between Labour and the Lib Dems.

The rise of the Anglosphere

Michael Kenny and Nick Pearce write that, beneath the chaos of a highly turbulent period in British politics, a significant shift in the mindset of those at the top of the political right has gone unnoticed:

Among a growing number of conservative-inclined Eurosceptics, the long-standing ambition of an alliance made up of some of the leading English-speaking countries spread across the world has quietly moved from marginal curiosity to a position of respectability. The idea of the “Anglosphere” – and the policies and strategies pursued by some of the political leaders of its constituent countries – has become a source of increasing, almost magnetic influence on British conservatives. And it may well provide the governing intellectual framework for the Eurosceptic campaign to quit the European Union in a post-election referendum.

The concept of the Anglosphere – which they define as centred around the UK, Australia, New Zealand, Canada and the US – depends on the long-held belief that Britain’s best interests lie in forging closer relationships with those countries that share a language and have broadly similar cultures and political structures, and gives Britain the opportunity to operate as a “global economy”.

Tracing the history of the idea back to the Second World War, Kenny and Pearce write that an assortment of political forces makes this seem attractive to many on the right:

The appeal of this idea is not just a reflection of growing disillusionment with Europe. For many, the rise of China, the increasing threat of radical Islam and the uncertainties of the global economy all make the question of locating political allies and sympathetic states much more imperative for the UK. The future of the west, some argue, may be contingent upon a closer coalescence of the Anglosphere countries.

They conclude that it is not a political concept the left should ignore:

The Anglosphere is far from being just a quirky, nostalgic idea. It is at the heart of a re-emerging political world-view. Understanding its power, reach and history is imperative for a centre left that needs a more clearly defined strategic ambition and sense of political direction if it is to do more than survive buffeting by the storms.

Erica Wagner meets Tom Stoppard following the final dress rehearsal for his new play, The Hard Problem. They discuss the relevance of modern playwriting, as well as politics.

On his own political instincts, Stoppard agrees with the assessment of him as “conservative with a small c”:

I think it has a literal meaning, to do with conserving things. It suggests a kind of prudence in moving forward; a certain caution. Maybe there are one or two things I’m more radical about but ‘conservative with a small c’ is perfectly fine.

He also notes that he’s unsurprised by disillusionment in the current political climate, which he finds “scary and depressing”:

It’s a bad time to be a voter. Where does one actually place one’s devotion, dedication, enthusiasm? You end up trying to calculate the least worst. It’s very troubling that we pay lip service to democracy as an ideal but we are becoming less democratic the more we promote democracy for other people.

Asked if his plays still have relevance to the political sphere, he admits that:

. . . I deal in luxury goods nowadays. I don’t actually make a habit of quoting myself but there is a woman in Arcadia, or maybe it’s another play, who says: ‘It’s needing to know that makes us matter.’ That impulse feels like luxury goods now, compared to doing something about the fact that half the population of the Lebanon is now refugees. Shouldn’t I write about that? Shouldn’t I go to Beirut? Rather than wonder whether I should go down the Fulham Road to visit a guy doing experiments?

Wagner notes that Stoppard’s “mane of hair [is] now grey”. He realises that time is shorter than it once was:

I’m 77. Fifty years ago, I would have thought, frankly, if you get to be 80, you’ve won. Everything else is gravy. Now I don’t feel this at all and it’s quite worrying, if one cared to worry about it. I don’t think I’d like to leave things as they are. I want to think there’s something to follow [The Hard Problem] and plays are the only thing I write which are truly my own.

Robert Skidelsky: the way back to prosperity is not austerity but debt relief

The Greek election confirmed what everyone knew but wouldn’t say: most of the Greek government’s external debt of €317bn will never be repaid. It would be best if Europe’s leaders openly acknowledged this and stopped trying to “pretend and extend”. They should convene a European debt relief conference, as Syriza has suggested. This would agree to cancel a percentage of the external debt of all heavily indebted eurozone countries. Italy, Spain, Portugal and possibly Ireland would qualify. The percentage would vary with the amount of the outstanding debt and the economic plight of the different debtors. For Greece, a debt write-off of about 50 per cent, leaving it with a debt/GDP ratio of close to 90 per cent, would give a real chance of a fresh start.

Skidelsky argues that the deciding factor in issues of repayment is not “the morality of debt forgiveness” – which “can be endlessly debated” – but “the political clout of the creditor and debtor forces”. He asserts:

Morality and politics aside, there is a compelling economic argument for debt forgiveness. The huge external debts of countries such as Greece menace the recovery of the eurozone from the Great Recession. They can only be repaid by transferring resources from the debtor to the creditor countries. To do this, the heavily indebted countries will have to run export surpluses of up to 10 per cent or more over several years. (Greece’s current account surplus is under 1 per cent.) No one supposes that they will achieve productivity gains sufficient to make this possible. This means that further large cuts in their living standards will be required to generate the necessary exports.

[A]ny honest attempt to “pay back the debt” will almost certainly create a Europe-wide depression. To avoid this, the IMF and ECB will have to lend the debtor countries more money on condition of more austerity and “structural reform”; and so the debts will pile up, accompanied by ruinous political, economic and financial turmoil, as Europe spirals downwards. What a mad way to run our affairs!

I agree with Syriza: the way back to prosperity and solvency is not debt collection and austerity but debt relief and public investment. This is Europe’s choice.

In an original short story for the NS, David Vann, the prizewinning author of Legend of a Suicide, offers his own version of the myth of Medea, who murdered her children in revenge after her husband betrayed her. The story begins:

This lavender flesh so soft and impossible and no surface to it, no underside, patterned through. True flower. She would have this flesh herself, no inside and outside, no heart, no lungs, no womb, no blood, no history or home but only pattern of colour and light unending and still.

She unsheathes her knife, bronze face of a grandfather, throat of a brother, cuts flower from source, opens a grove of poison. She expects the blade to melt or hiss, some fear in her, but of course this poison is without sign, without scent, fire in purest, quietest form.

Bulbs plain as clods of dirt. She washes each carefully in a basin, as if they were infants, pats them dry and then slices each in half, severed flesh white, exposed, and slices again into quarters until all before her are in pieces.

Form of a world, form of her life, endlessly repeating.

The NS political editor, George Eaton, writes that the most fruitful potential coalition could be one that has attracted little discussion in recent months: Labour and the Liberal Democrats.

A new study by the Labour-affiliated Fabian Society and the liberal CentreForum, Common Ground, charts the large degree of policy crossover between the two parties, including a mansion tax, borrowing for infrastructure investment, a 2030 decarbonisation target, greater oversight of free schools and academies, an elected House of Lords, the reduction of the voting age to 16 and political funding reform, part of 100 measures in total. The report, both organisations emphasise, was not commissioned by the parties but is intended to serve as “a resource” for them. As such, it represents the closest document we have to the first draft of a Labour-Lib Dem coalition agreement.

Eaton writes, however, that the Lib Dems fear being cast as “the nasty party” in a coalition with Labour, due to their harsher austerity policies, and that some within Labour view the “yellow bastards” as worse than the Tories. Nonetheless, he concludes that both parties should seriously consider working together:

The complexion of the government that emerges from May’s election (minority, minority coalition, or majority coalition) will be dictated by the arithmetic. Yet even before any votes are counted, Labour and the Lib Dems may need to co-operate tacitly. In the past fortnight, three shadow cabinet ministers have told me of their fear that a collapse in Clegg’s party’s vote could allow the Tories to win upwards of a dozen seats in which they currently lie in second place (of the Lib Dems’ 56 seats, the Conservatives were runners-up in 37 in 2010). Tactical voting, the means by which the centre left has historically sought to secure a so-called progressive parliament, will matter more than ever. Whether Labour and the Lib Dems are capable of creating an informal pre-election coalition could determine whether they have the chance to form one afterwards.

The artificial majority provided by Clegg’s party has enabled the Tories to pass all of their major legislation and to govern uninterrupted for five years. If the numbers align on 8 May, Labour would be remiss not to learn from this example.

A new poem by Clive James.

Helen Lewis: memo to the right: if Labour is as rubbish as you say, why aren’t the Tories streets ahead?

Ryan Gilbey reviews the new films Selma and The Interview.

Suzanne Moore: I felt confident about taking a lie detector test. Then I remembered my Robin Hood past.

Will Self: We like to feel cosy in our happy little tribes – but it’s a big world, after all.