Terrible scenes unfolded on Thursday night as the merry europhobic frog Nigel Farage locked horns with randy scarecrow Russell Brand in what was probably the most stressful line-up on the BBC’s Question Time since that episode when a nonplussed pigeon flew in.

And in fact, this was rather a pigeonlike performance from the two populist posturers: lots of squawking, and rarely a leg to stand on.

I watched it so you didn’t have to. Here are the best (or worst, depending on how at peace you are with our political life) bits:

The first question was about petty, adversarial British politics and what should be done about it. A treat for both Brand and Farage, who like to position themselves precariously outside the establishment, even though they represent everything that is wrong with the way politics is shaped and covered.

Boris Johnson is entering his moment of greatest peril

Why price controls are the right response to soaring gas prices

Is Wes Streeting the next Labour leader?

“We’re not doing real politics anymore,” Nigel Farage asserted, gravely. With Russell Brand facing him, shirt unbuttoned to dangerously sub-Tony Blair levels, this must be the truest phrase ever to be uttered on a QT panel.

Brand seemed uncharacteristically nervous. His voice trembled and he appeared to have forgotten his incessant inner thesaurus when answering a question he is usually so well versed in. He slammed the “petty, adversal nature of politics” before rounding on Farage for his background in the city: “That dude… had the perfect training to be a politician”:

On that subject, Labour’s shadow international development secretary Mary Creagh politely suggested people don’t like men interrupting women all the time, only to be interrupted by David Dimbleby, who was ostensibly chairing the debate.

Brand did redeem himself slightly by coming out with the soundbite of the night, warning the audience that Farage is not a “cartoon character”, but rather “a pound shop Enoch Powell – and we’ve gotta watch him”.

A disabled man in the audience tore Brand to shreds, telling him he doesn’t “like people preaching”, nor the accusation that Farage has criticised the disabled. His question ended in him repeatedly challenging Brand to “STAND” for parliament.

“I would stand for parliament but I would be afraid I would become one of them,” Brand replied limply, his Medusan curls wilting under the pressure and sadness of it all. This led to the man shouting, “RUBBISH” at him for quite some time. Dimbleby either didn’t notice, or was simply enjoying the scene.

And then it was Farage’s turn, as a woman continuously screamed at him for being “racist”, before issuing the ultimate Kent-based threat: “I live in South Thanet and I’m coming for you, Farage.” She was accused of being the “rudest woman I’ve ever met”,  by a woman who was interrupted calling for immigrants to be “vetted”. Which is also pretty rude. 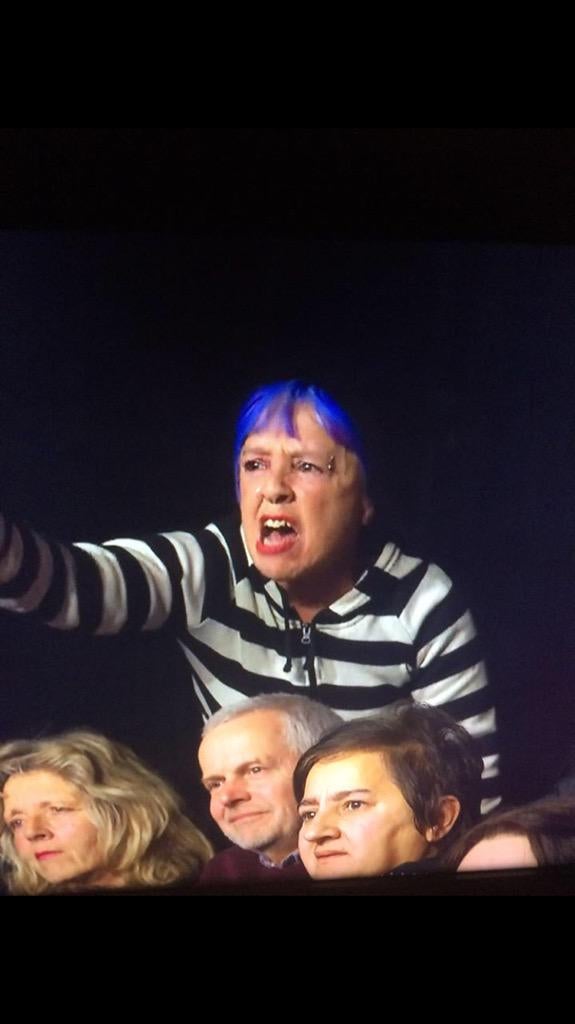 Dimbleby also let this go on for some time, for purposes of balance presumably.

Mary Creagh being sensible on immigration

Perhaps not the night’s most electric moment, but shadow cabinet member Creagh had what Labour’s message should be on immigration down to a tee, addressing the housing shortage, public service problems and low wages rather than giving credence to the tale of Britain being “overcrowded” with immigrants.

Another rock in a stormy televisual sea was the journalist Camilla Cavendish, who gave measured views on each subject and gently admonished the media, which shot Brand’s tired old “mainstream media, vested interests, etc etc” fox.

“Weaponising”: the strange, Brandesque fake verb Ed Miliband apparently used about the health service, according to Mordaunt. Even Creagh couldn’t be bothered to display loyalty to her leader on this one, appearing as baffled as the rest of them.

More telling was Farage’s answer to the question about private money in the NHS. His party has been embarrassingly all over the place about its stance on the health service in the past few months, as it attempts to take a populist stance on the subject to creep further into Labour’s core vote.

Farage’s revealing language about ruling out outsourcing “in the short term”, and his insistence Ukip would “fight the election” on the grounds of outsourcing to private providers having “not delivered” adequate results, suggests that the party will change its stance on this after the election.

But he went to a private school