These are turbulent times in British politics – support for Ukip has been surging for several years, with record breaking results in local and European elections and a huge by-election win in Clacton, Rochester and Strood. Now the Greens are on the rise as well, overtaking the Liberal Democrats and threatening to add further confusion to the most fragmented and chaotic election in recent British political history. The surge in support for Ukip and the Greens are two very different expressions of the same fundamental shift – the growing political importance of the value differences which divide the nation’s old and young.

The graph below shows how this generational divide plays out across a range of issues. Britain’s young have grown up in a diverse, secular, socially liberal and outward looking society, and their values reflect this. The under 35s are comfortable with diversity, accept high immigration and reject interpretations of Britishness which exclude the foreign born or non-Christian. The young want a Britain at the heart of Europe, supporting the EU, which they would vote for by a two to one margin in a referendum. 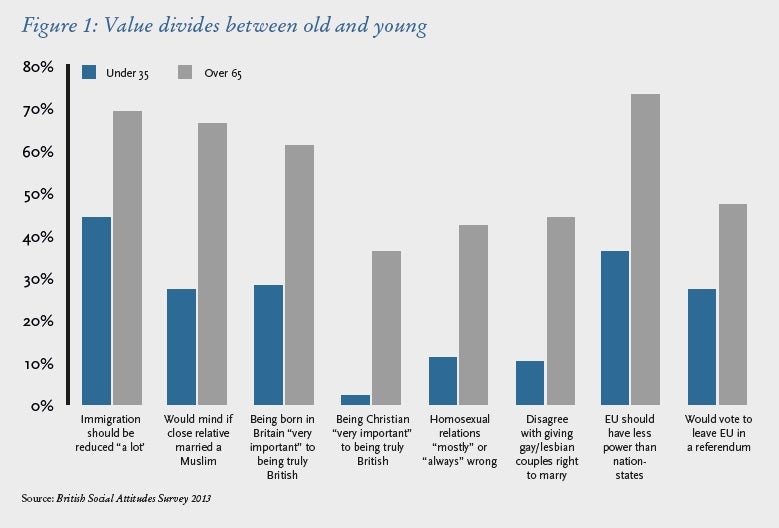 Britain’s pensioners are a world apart from their grandchildren on all of these issues. They grew up in a socially homogenous country, where differences in language, dress or religion were rare, and where migrants were people who came from the next county, not the other side of the world. They find the dramatic shifts of the past fifty years unsettling, as the country they knew has transformed into something they struggle to recognise or accept. These older voters still hold to the traditional sense of Britishness, one which does not easily accommodate newcomers from abroad or differences in religion. British pensioners find ethnic and religious difference unsettling and are much more ambivalent about gay rights (though most do support these). British pensioners, who grew up in a Britain which looked to the Commonwealth rather than to Brussels, are profoundly sceptical of the European Union – they want its powers reduced, and if this is not possible, they want to leave.

The generational divide has many sources including differences in social and economic experiences growing up, the rapid expansion of higher education, the long running trends towards secularism and social liberalism found in most developed democracies, among others. It also has deep roots – many of these divisions between young and old have been visible in social survey data for decades. But three key changes have mobilised it into the heart of politics.

Firstly, the traditional divides of class and ideology which defined “left” and “right” in Britain have lost the force they once had. Politicians in all the mainstream parties have converged on a consensus on the big issues of free markets and public services, creating space for other arguments to move to the fore. Secondly, arguments over immigration and Europe have persisted for over a decade, eroding voters’ faith in the traditional parties’ solutions to these problems. Thirdly, the mainstream parties themselves are now dominated by younger university graduates who may differ on some elements of the value divide (particularly the EU) but who tend to share the socially liberal, outward looking world view of the rising young.

Ukip have established themselves as a major player in the political system by becoming the voice of the grey end in this value divide. Almost all of Ukip’s positions – from immigration restriction to Euroscepticism, from grammar schools to law and order – reflect the world view of the grey voter. The Greens and, to some extent, the SNP are looking to mobilise the other pole into politics – cosmopolitan, Europhile, pro-immigration, and liberal.

Both mainstream parties have struggled to respond to this new division because both have traditionally built political coalitions across generations. They are now hamstrung in trying to compete with the insurgents, as any appeal to one side of the generational divide risks alienating the other. A full throated Conservative appeal to Ukip voters may bring short-term gain but would be a long-term disaster, alienating the ethnically diverse, cosmopolitan rising electorate who the party must win if it is to have a future fifteen years from now. Similarly, Labour may be tempted to embrace the cosmopolitan young agenda, and see off the Green challenge, but they know doing so could put at risk the many Labour seats, like Heywood and Middleton, where the party relies on greying Old Labour voters for victory.

Dr Robert Ford is Senior Lecturer in Politics in the School of Social Sciences at the University of Manchester, and the co-author of Revolt on the right. This is an article from the latest edition of Bright Blue’s magazine, entitled “From Global Empire to the Global Race: modern Britishness”, out today.