Net migration to the UK rose to 260,000 in the year to June – 78,000 higher than the previous year. The figure is also higher than net migration in the last year Labour was in government.

David Cameron pledged to cut net migration to “tens of thousands” before next year’s election – a promise which will now be broken.

He told the BBC’s Andrew Marr in January of that year – four months before he became Prime Minister: “In a country like Britain you’re going to have large numbers of people going and living abroad every year and working abroad, and also large numbers of people coming in. It seems to me what matters . . . is the net figure. In the last decade, net immigration in some years has been sort of 200,000, so implying a 2 million increase over a decade, which I think is too much. We would like to see net immigration in the tens of thousands rather than the hundreds of thousands. I don’t think that’s unrealistic. That’s the sort of figure it was in the 1990s and I think we should see that again.” 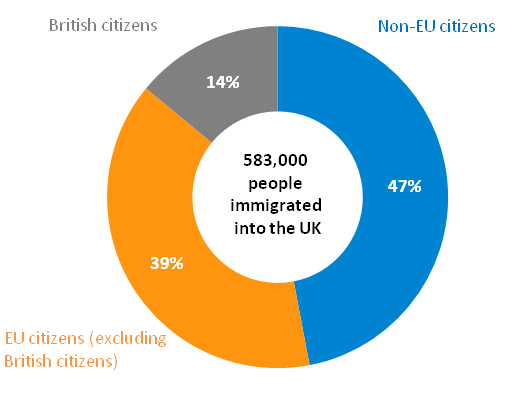 Although, as Oxford’s Migration Observatory states, it should “come as no surprise” that the Tories haven’t brought net migration down to their target, it is a blow to Cameron and co. This is mainly due to Ukip, who have long been garnering support by saying the Prime Minister cannot be trusted on his pledge regarding immigration in the UK. Indeed, the Tory-turned-Ukip MP, Mark Reckless, told me this was one of the key reasons he left the Conservative party – to escape the supposedly false promises made to voters by Cameron on the net migration level.

And unlike their eventually inevitable defeats in the Clacton and Rochester and Strood by-elections to Ukip, the Conservatives have done little to “price in” their missed target. The Home Secretary Theresa May has been attempting in recent weeks to cushion the blow, first by calling Cameron’s target a “comment”, and then by admitting it was “unlikely” to be met, and Cameron’s big speech about immigration is planned for tomorrow morning, it has been clear for more than three years that this government’s policies alone would be nowhere near enough to hit the “tens of thousands” net migration target.

This delayed reaction from the Tory leadership shows they have either been trying to bury their heads in the sand over the subject, something they can no longer do with Nigel Farage nagging forcefully at their elbow, or have been deluding themselves. Either way, the figures today will give succour to Cameron’s critics in his own party and beyond.