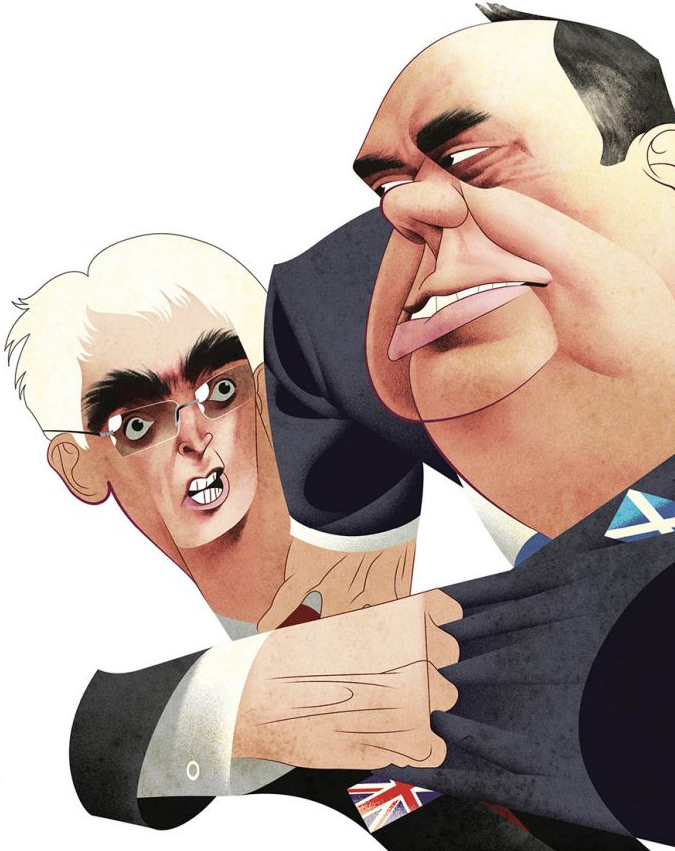 The recriminations have already started inside the cross-party Better Together campaign, with senior figures briefing against one another and the toxicity of the Tories being blamed for the existential crisis engulfing the British state. The British government’s reluctance to allow for a multi-option ballot could well prove to be a fatal error, with devastating consequences for David Cameron’s premiership.  So deep is the crisis that the Prime Minister of the state that could be shattered in 10 days’ time is unwelcome in Scotland and is thus unable to make a substantive contribution to saving the Union in which he so passionately believes. He has been rendered virtually mute by the decisive defeat of conservatism in Scotland. To paraphrase Charles Kennedy: Margaret Thatcher did more for independence than any Scottish nationalist. Her party’s legacy could yet be the break up of Britain.

But it is not the failure of the Tories alone that is powering the nationalist surge. There has been a catastrophic loss of trust in Labour and, according to the YouGov poll for the Sunday Times that has so unnerved the British establishment, a majority of Scots of working age now support independence. As our pro-independence blogger Jamie Maxwell has long predicted would happen, low income Scots are abandoning Labour and falling in behind the Yes campaign. The anti-politics mood in the country at large – the mood that the likes of Nigel Farage and Russell Brand have channeled so effectively – is also contributing to the collapsing authority of the old established parties.

When I visited Alex Salmond in June last year at Bute House, his official residence in Edinburgh’s magnificent New Town, he explained to me how he intended to approach the referendum. He said we were then merely passing through the “phony war” stage of the campaign. He was relaxed that Yes was a long way behind in the polls – and he remained so when he came at our invitation to Westminster in March, with the polls largely unchanged, to deliver the New Statesman lecture, “Scotland’s Future in Scotland’s Hands”, which was when he popularised the metaphor of London as the “dark star” sucking the life out of the rest of the country. He repeatedly referred to the 2011 Scottish election, when the SNP came from behind in the final two weeks to win an astounding landslide victory.

“Part of [being positive] is getting your party into the attitude in a campaign that, if it applies itself properly, it can win,” he told me. “Since 2007, that’s what I’ve done and since 2007 I haven’t lost a national election.

“We’ll approach the referendum in the same way we approached these two Scottish elections. And that is, we will set a vision for the people. I’ll certainly hypothesise on the future and I shall do so on the basis of success, not failure.”

The First Minister has been true to his word and his “optimism strategy” could carry him all the way to the ultimate triumph.

Yet all is not lost. If the Westminster establishment is serious about far-reaching constitutional reform (something we have long advocated even as supporters of the Union) as has been suggested in something approaching blind panic in recent days, then Alex Salmond, whose political mission from the outset was to destroy Great Britain, might end up creating the conditions in which it could be remade and thus saved. Perhaps. What is obvious is that the British establishment is becoming desperate and things might turn nasty – no more talk of border posts and military guards, please – in the final days before 18 September.

What we have been witnessing over the last year or so in Scotland is a nation’s democracy renewing itself – the flourishing of the forces that the writer Gerry Hassan calls “third Scotland”, whether it is the excellence of the Bella Caledonia website or the anti-neoliberal Common Weal project, which published its own plan for economic reconstruction.

All of us who live in these islands should be grateful because the complacent and smug London elites – political, financial, media, bureaucratic – are finally being forced to take notice: but how late it is, how late! The house is on fire and the flames are close to getting out of control.