Around the world, girls and women are being cut. Most of them will still be under 15 when they have their genitalia partially or totally removed. Some are still babies. Many will go on to suffer a lifetime of health problems, infertility, problems urinating and complications in childbirth, as well as the weight of deep psychological scars. For some girls it is a death sentence.

Let’s be absolutely clear – Female Genital Mutilation is child abuse and an extreme form of gender violence. But for too long the world hasn’t wanted to talk about a harmful practice that is a centuries-old part of life for many communities. Too little was invested in ending FGM; too little money, too little research, too little attention.

It’s time we broke the silence. Today is the International Day of Zero Tolerance to Female Genital Mutilation, and along with campaigners across Africa and the UK I am calling on the international community to raise their voices, back the African-led anti-FGM movement to end FGM within a generation.

There are at least 125 million women worldwide who have been subject to FGM. In countries like Egypt and Somalia, more than 90 per cent of girls and women have been cut. Here in the UK thousands of girls face being sent abroad in the “cutting season” of the long summer holiday.

We won’t stand aside as this violence is inflicted on girls in the UK and around the world. That is why Britain is now the world’s biggest supporter of activity to end FGM. Last year I launched a £35m programme that aims to reduce FGM by 30 per cent over five years in at least 10 countries.

We know that thousands of communities across Africa are deciding to end the practice. This is being supported by real African commitment. Last week I was in Ziniaré, a village in Burkina Faso that has abandoned female genital mutilation. During my visit I went to the Suka clinic for FGM survivors, set up by Burkina Faso’s remarkable First Lady Chantal Compaoré. They showed me horrifying, harrowing videos and photographs of the damage that FGM does to millions of girls and women. 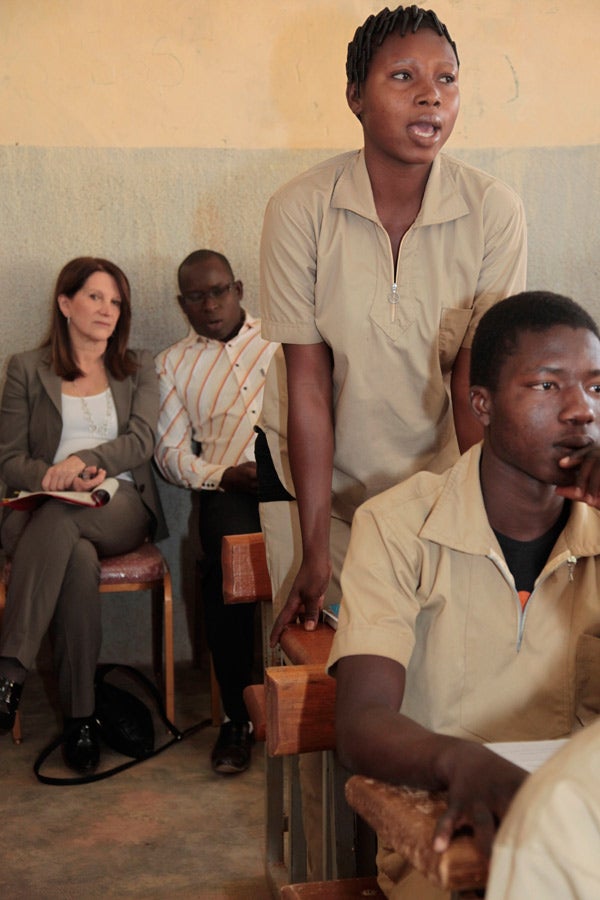 But I also saw hope being restored by the dedicated staff who provide reconstructive surgery to dozens of Burkinabé women every week. This allows these women to have sex, give birth safely, and avoid a multitude of other health problems. All this costs just 6,000 Central African Francs, or $15, but changes lives beyond measure.

Importantly, attitudes are also changing in Burkina Faso. I visited a school, where I saw a class of 15 and 16 year-olds – both boys and girls – engage in a lively debate about the dangers of FGM and design slogans to tackle the practice. I met police officers who are passionate about investigating and prosecuting potential and actual cases. I joined in a local radio show in which a woman who hadn’t even known that her body was different to those of other women called in to seek help for the first time in her life.

Although 76 per cent of girls and women between the ages of 15 and 49 have undergone FGM in Burkina Faso, the prevalence among girls aged 15 to 19 has dropped by 31 per cent. That is an impressive shift, but there’s a long way to go. Across Africa 30 million girls are at risk of being cut over the next decade.

That’s why the UK Government has announced a range of measures today to end FGM both in Britain and around the world. For the first time ever, all NHS acute hospitals will have to record information on patients who have suffered or are at risk of suffering FGM. A new FGM Community Engagement Initiative is also being launched by the Home Office today.

But we will not see an end to FGM here unless the practice is eliminated worldwide. That is why the Government has today appointed a consortium of leading anti-FGM campaigners to deliver a global campaign to end FGM. This campaign will unite activists across Africa with UK diaspora communities and charities, raising awareness of the fact that FGM is ending, that change is happening and communities are part of the movement against it.

Sometimes people see for themselves the terrible harm FGM can do. In Ziniaré I met Naba Siguiri, a customary chief who lost his 5 year-old daughter while she went through FGM. Siguiri became one of the loudest voices against FGM in his village, which has now ended the practice.

But where people don’t have a personal experience of the damage FGM can do, then other methods are needed to shift people’s opinions. That is why we need a grassroots movement across Africa to change attitudes and help communities become part of the global movement to end FGM in a generation.

If everyone: governments, NGOs, teachers, health professionals, police, religious leaders, communities themselves and even those who perform the practice work together, then we can end FGM within a generation and give millions more girls and women the chance of a healthy and productive life. We cannot end FGM in the UK without ending it in Africa – the two are inextricably linked – which is why we will not rest until FGM follows foot-binding into the history books.