It looks like the Lib Dems’ web designer didn’t get the memo about going softer on Labour. While searching for the party’s Spring Conference papers (not available at the stated address), I discovered its new 404 page which features Ed Balls (despite his recent rapprochement with Nick Clegg) and the message “Just like Labour’s plan for the economy, this page doesn’t exist.”

It might be a humorous innovation (and look what happens when you click on Balls) but the Lib Dems would have been wiser to enjoy a joke at the Tories’ expense. As defeated deputy leadership candidate Lorely Burt rightly notes in an interview with the Huffington Post today, to hold most of its seats, the party needs to focus on winning tactical votes from Labour supporters. Of the Lib Dems’ 57 seats, the Tories are in second place in 37 and in 14 of the 20 most marginal.

Burt observed: “What we also need to do is talk to Labour supporters, who have lent us their vote in the past, to keep the Conservatives out. Because the message is stronger now than ever. In places like Solihull, you’ve got a small Labour vote but it will make the difference between winning and losing.”

Meanwhile, with Burt’s status as one of just seven female Lib Dem MPs in mind, Guido Fawkes’s Alex Wickham has designed the alternative below. 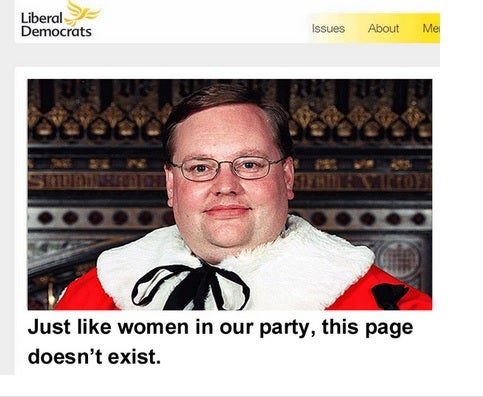