For all the talk of recovery this week, the unpalatable truth remains that most people are still getting poorer. In the last quarter, average weekly earnings rose by just 0.9 per cent, less than half the rate of inflation (2 per cent). As long as the wage squeeze continues, the Tories will struggle to rebut Ed Miliband’s warnings of a “cost of living crisis” – and it could cost them the election. While the Conservatives have established a comfortable lead on who would best manage the economy, they continue to trail Labour on who would do most to improve family incomes (the same trend seen during Obama vs. Romney).

Aware of this, the Tories have resorted to statistical chicanery that would make even Iain Duncan Smith blush. In an article in today’s Times, George Osborne’s protégée Matthew Hancock, the skills minister, claims that the “crisis” spoken of by Miliband is a mirage. He writes: “The story is said to go like this: yes, there are a record number of jobs but the rich are getting richer and incomes are falling for everyone else. Right? In fact, wrong.”

While the ONS’s recent annual survey of earnings (for April 2012 to April 2013) shows that median wages (2.1 per cent) rose slower than inflation (2.4 per cent) for the fifth year running, Hancock claims that the increase in the income tax personal allowance means that almost everyone is better off. He writes:

New facts on take-home pay — the pound in your pocket — are stark. Last year take-home pay grew faster than inflation for every group of earners except the top 10 per cent.

For those in the middle, squeezed by the great recession, take home pay rose by 4 percent. The top tenth were the only group who saw their take home pay grow by less than prices. So the bottom 90 per cent of earners saw the wages they took home rise faster than consumer inflation last year.

He adds: “[T]he monthly average earnings figures measure income before tax and, thanks to our tax cuts, low and middle-income earners are paying much less of it. Last year we cut the tax paid by a typical taxpayer by £320. By this April most people will be paying £705 less in income tax than before the election. Those on the minimum wage will have seen their income tax bill cut by almost two thirds.”

Were it true that living standards are rising for most people, the Tories would have a better story to tell on the economy. Unfortunately for them, it’s not. First, the data used by Hancock takes no account of the cuts to in-work and family benefits introduced by the coalition, such as the real-terms cut in child benefit, the uprating of benefits in line with CPI inflation rather than RPI, and the cuts to tax credits (other major cuts such as the bedroom tax, the benefit cap, and the 10 per cent cut in council tax support were introduced after April 2013). The IFS has consistently shown that almost all families are worse off (see table below) once all tax and benefit changes are taken into account. But the Tories, for entirely political reasons, won’t mention this.

The other main problem with the statistics is that they exclude the UK’s 4.36m self-employed workers, many of whom have suffered disproportionate falls in their income, and those who don’t earn enough to pay National Insurance (the source of the ONS data), both of which combine to create a more flattering picture. 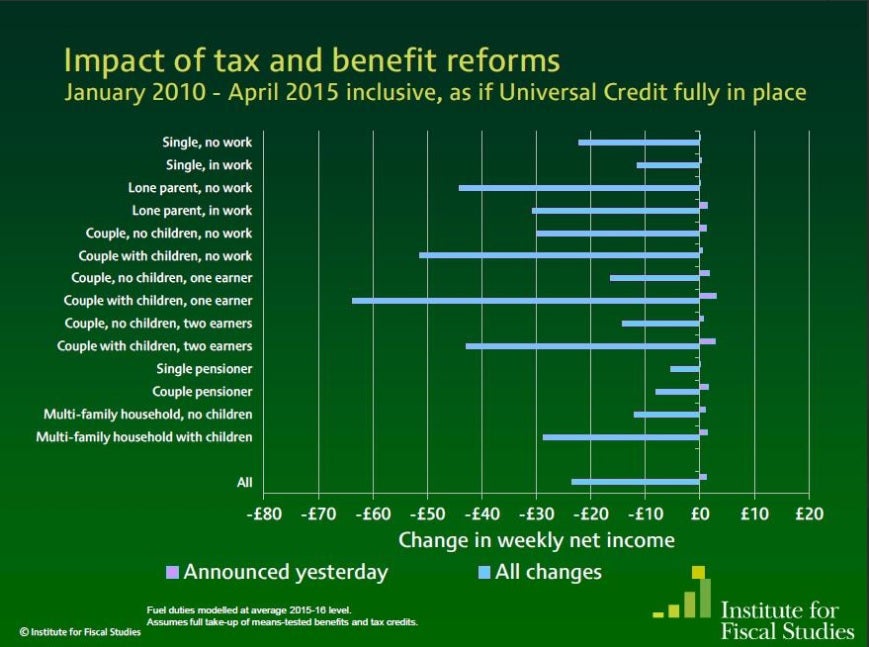 In an attempt to present austerity as progressive, Hancock notes that his figures of choice show that disposable income did not rise for the top 10 per cent. But this was before the government cut the top rate of tax from 50p to 45p in April 2013, handing an average tax cut of £107,500 to the UK’s 8,000 income millionaires. The irony is that the one month since 2010 when average earnings rose faster than prices was April 2013 (which the figures used by the Tories conveniently include), when high earners collected the bonuses they deferred in order to benefit from the reduction in the top rate.

One almost has to admire the Tories’ chutzpah; is trying to convince voters who are worse off (and are all too aware of that fact) that they’re actually better off really smart politics? On 5 Live this morning, Robert Halfon, the blue collar moderniser, who has pushed harder than any other Tory for an increase in the minimum wage, tellingly chose not to adopt this tack.