After an opening salvo directed at his promise to reinstate the 50p top rate of tax on incomes over £150,000, today’s Times turned its fire towards the centrepiece of Ed Balls’s Fabian Society speech. At the heart of that speech was a promise to “balance the books and deliver a surplus on the current budget and falling national debt in the next Parliament”.

To old Labour ears, this sounded like capitulation to Osborne’s “austerity first” mantra. To the Times, by contrast, it meant a £25bn “spending spree“.

This matters. So what is going on? There are two key ideas in what Balls is saying. The first is achieving a current budget surplus. “Current” public spending is total public spending less investment. Since capital depreciation is treated as part of current spending, the investment we are talking about here is net investment. Over the last 35 years, this net public investment has averaged 1.4 per cent of GDP, just one pound for every 20 of current public spending.

Assuming a full five year life, the next parliament would continue to the end of the financial year 2019/20. Balls could meet his promise by balancing the current budget in that year. At the moment, the published forecasts from the Office for Budget Responsibility (OBR) finish one year earlier, in 2018/19. For that year they show a surplus of £28bn. Since Balls is only promising zero, he could fulfil his promise, one year earlier than he needs to, yet still spend that much more than Osborne. So long as you are prepared to overlook the small difference between “cutting less” and a “spending spree”, this is presumably what is so exciting the Times.

The second key idea is reducing the national debt, which in practice must mean it falling as a proportion of GDP. Arithmetic here is a Chancellor’s friend. The basic point is that debt will fall as a share of GDP so long as the addition to debt in any one year – the annual public sector deficit – is proportionately smaller than the addition to GDP due both to real growth and inflation. With debt now standing at some 80 per cent of GDP and GDP (real growth plus inflation) foreseen by the OBR as growing at 5 per cent a year, the debt share will fall so long as the public sector deficit is less than 4 per cent of GDP. In ordinary times, that is not a tough target at all.

Of course Balls has not spelled out how much investment Labour would go for. But with a balanced current budget, even net public sector investment equal to 3 per cent of GDP would be entirely consistent with a falling debt share. Net investment at this rate is twice what’s in Osborne’s plan and twice the average over the last 35 years. As the bars in the graph show, only in the two crash years has the share of net public investment been higher. 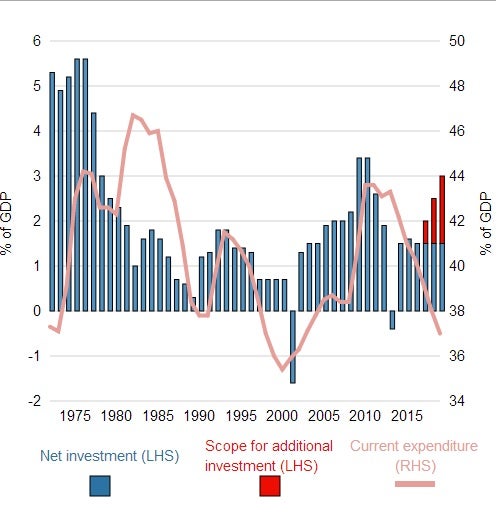 So it is easy to see why Balls chose this ground to make a stand. First off, it is tough – a balanced current budget. But it also less tough than the government – so there is, for those old Labour ears, still a political difference between the parties after all. And it is also radical, signalling, or at least allowing, for a decisive shift in spending towards investment.

Does the Times’s attack mean Labour’s new position is already untenable? The answer is no, for the simple reason that the reference point – Osborne’s plan – is eye-wateringly tough. As the BBC Robert Peston picked up at the time, the OBR made this point by noting how the plan would take “government consumption of goods and services – a rough proxy for day-to-day spending on public services and administration – to its smallest share of national income at least since 1948”.

Even so, as the line in the graph shows, Osborne is still only taking current spending as a share of GDP back to the levels seen during the Blair years. This top-down view takes no account of how spending pressures within the total have changed over the intervening years. It also takes no account of the fact that the economy “projected” by the OBR for five years hence is wildly unbalanced, wholly unsustainable and utterly implausible.

But what made those low levels possible was the strong and sustained economic growth which began in 1993. This week’s numbers from the ONS showed strong growth in the second half of 2013. If that continues for several years, 37% is not unthinkable. An inference from this: Balls is banking on strong, sustained growth.

The other point is about the implication of higher net public investment. As the early years of the graph show, net public investment used to be much higher, not 3 per cent of GDP but more like 5 per cent. That’s a lot of money. So who was spending it? The answer is local authorities on house building and nationalised industries. This is not to suggest that these nationalised industries should be rebuilt. But if the money is to be spent wisely – and to do otherwise would be a disaster – Labour needs to consider what institutions are needed to do that. Pushing up the capital budget is the easy part.

Peter Kenway is director of the New Policy Institute