The main finding from today’s Office for National Statistics data is that the income of the median working age household fell by 6.4 per cent between 2007/08 and 2011/12. This staggering fact hasn’t made the headlines today, illustrating that the squeeze on living standards is no longer ‘news’. The political challenge is to stop it becoming an accepted, inevitable fact of our national life. History tells us that living standards fall during recessions then pick up when recovery returns. But the past is nov  guarantee of the future.

The data published today breaks down trends in the components of household income and one of the most striking results is the significance of tax credits and benefits for middle income households over recent years:

·  Between 2007/08 and 2011/12, income from tax credits among the middle fifth of non-retired households rose from £280 in 2007/08 to £610 in 2011/12 due to an increase in both the percentage of such households in receipt of tax credits (from 6.3 per cent to 12.1 per cent) and in the average amount of tax credits received. As income for households in the middle of the distribution declined, most often due to lower wages or fewer hours worked, tax credits made up (some of) the difference.

· Overall, the proportion of gross income going to the middle fifth of non-retired households in the form of cash benefits grew from 7.6 per cent to 12.3 per cent between 2007/08 and 2011/12. This has resulted from drops in employment income (and investment income for a minority) combined with rises in ‘welfare’ income. Such households in the middle of the distribution will almost certainly have at least one person in work.

The chart below shows that ‘cash benefits’ always play a larger role in household income for those in the middle of the distribution after a recession; though it is clear that that trend is even more pronounced this time round. 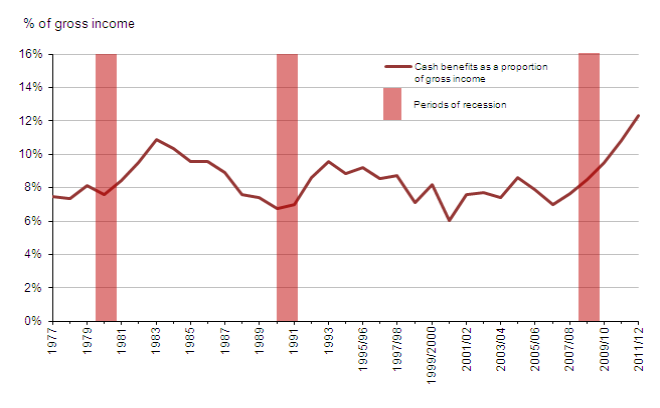 First, the benefits bill has continued to rise despite dramatic cuts in welfare spending because of the sheer scale of the decline in household income. Aggregate employment levels have held up better than expected, but rises in social security and tax credit expenditure won’t stop until household income across the bottom and middle of the distribution begins to grow. That means more second earners, more people working full-time and – crucially – more workers getting a real-terms pay rise.

Second, ‘welfare’ is not just something for the poor. The tax credit and benefit system has played a vital role in preventing the living standards of middle income households from falling even further than they actually have in recent years (as well as propping up demand in the economy). Contrary to its political caricature, the welfare state retains the potential to be a majoritarian institution, not simply one for the underclass.

However, proponents of this view must confront how little purchase this argument currently has in popular debate and how strategically vulnerable the welfare state is – despite today’s data on just how crucial it has been for the real ‘middle England’. That demands plans for reforming welfare – to spend money better and reduce the ‘costs of failure’ – not just defending it.